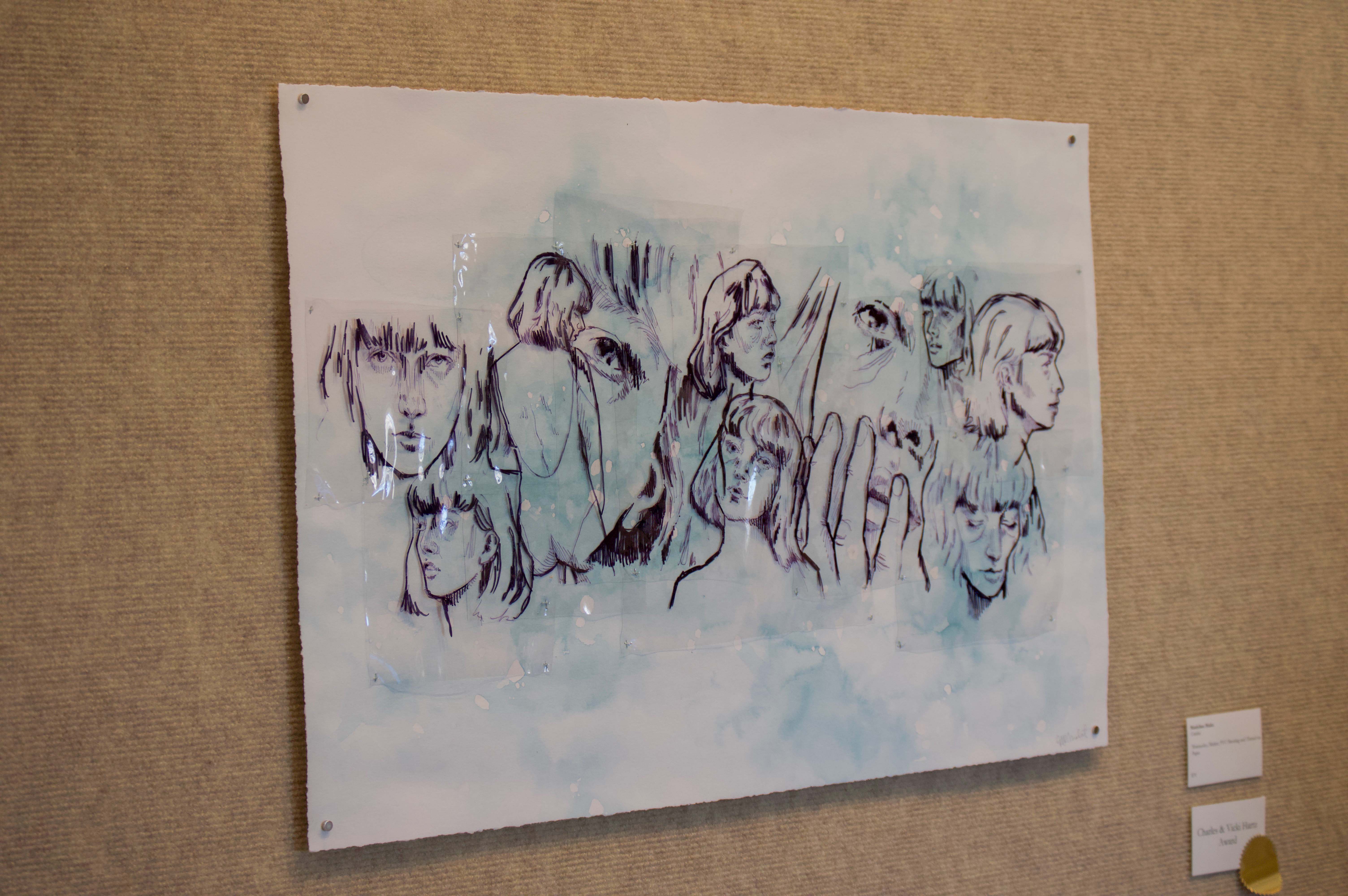 Students gathered in the Cyrus M. Running gallery on March 13, waiting in anticipation for Andrew Maus, director of the Plains Art Museum, to announce the winners of the annual juried art show.

Maus selected pieces from all mediums, including prints, paintings, sculptures, photographs, drawings, and more. When choosing winners, Maus looked for proficiency and craftsmanship along with emotional and conceptual quality.

“So how, if the work has sort of direct meaning, is it deep enough that I don’t just understand it and move on,” Maus said. “Is it emotionally rich and comlex? Easy emotions I move on quickly from as well.”

Submissions, which were accepted through Tuesday, March 6, were open to all students, art and non-art majors alike. One did not even need to be an art major to win.

“The idea of non-art majors entering, and in one case winning, I think is really telling …  the Best in Show [Cuppett], she’s a math major,” Maus said. “The way that I view life is that I don’t think creativity is for artists. I think that creativity is for everyone; people should just create, whatever that is.”

Maus was in charge of every aspect of the show, from selecting the pieces and the winners to designing the layout of the gallery. Helping Maus were the two student assistant directors of the gallery, Concordia students Katelyn Mitchell and Layne Cole. They received direction from Maus about how he wanted the gallery set up and then took it from there.

“The juror, Andy Maus, he helped a little bit with some of the layout, where he was like ‘I want this piece kind of by these pieces,’ so we tried to honor that as best we could, but some little changes got made,” Mitchell said. Mitchell and Cole also set up the pieces Maus would choose from and helped advertise the show.

Lori Feigum, office manager for Concordia’s art department, also helped with publicity from the submissions side.

“The first job is to put a call out for art, so I visit classrooms and talk about the juried show coming up, and kind of the process of how it works, to get the kids, you know the students excited about it. Then I work with a graphic designer and she makes posters,” Feigum said.

Feigum also lets students know which of their pieces made it in and prints labels for them. This year, Feigum had to make a lot more tags than she usually did; submissions were much higher than last year.

“This year we probably had double the entries, so that we had so many entries was just so great,” Feigum said. “It was hard for the juror to select the pieces.”

This year did have a larger collection than last year, and Mitchell thinks this is why the turnout was larger than in previous years

“The amount of artists that were being shown went up, and with that you have more artists, more friends. We’ve also just been having a great year with the gallery,” Mitchell said.

Senior photography student Colin Johnson was required to attend the show for his art class but also went to support his classmates.

“It was nice seeing some of my classmates photos that got in, I mean I’ve seen them before but it’s something different seeing them in frames on a wall, official like,” Johnson said. “It’s good to support other students’ creative endeavors because when you’re in a creative field, often times can feel like you’re a one man army.”

Overall, Maus was pleased with the show.

“I’m really happy to be a part of it, and I think Concordia can be proud of its students,” Maus said.

The student exhibition will be on display in the Cyrus M. Running gallery until March 26.