By: Betsy Asp
In: Theatre, Variety
With: 0 Comments 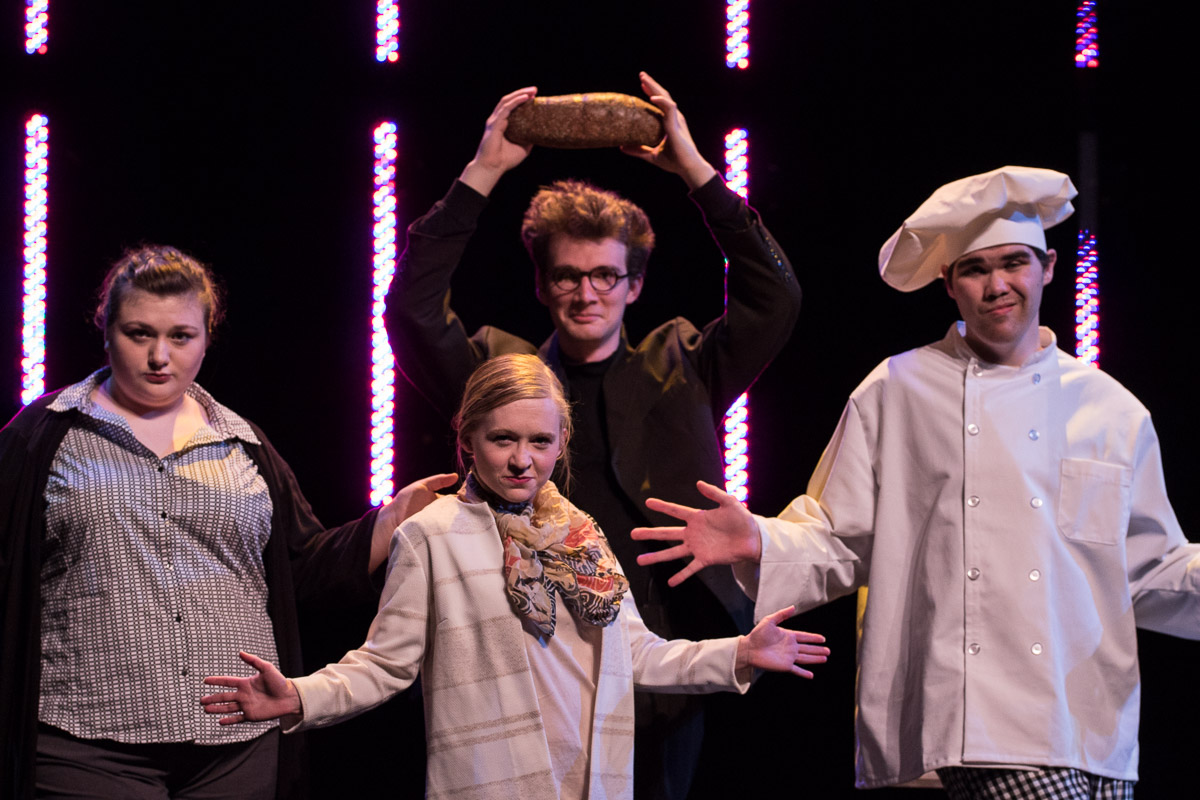 Concordia Theatre’s final production of the year will take on topics such as the power of language, existential crises, and the complexities of romance—all at the hands of six student directors.

The six student directors for “All in the Timing” are enrolled in the Advanced Directing course at Concordia. In previous years, the course has culminated in a showcase of individual one-act plays directed by the students. Dr. David Wintersteen, director of theatre at Concordia College, hopes that this change will give directing students a more fulfilling experience.

“Having a script that is intended to be an evening of theatre (rather than a random mixed bag of plays) allows us to present a unified show,” Wintersteen said in an e-mail. “We think that will raise the event’s stature on campus, and bring a wider audience to see student work.”

An additional change to the course this year is that the production will be designed by faculty and staff from the theatre department, rather than students.

“The students are able to learn about collaborative director/designer communication, and engage in a full design process,” Wintersteen said.

The one-act play “Universal Language,” directed by senior Kendra Buro, toys with the complex timing of dialogue in conversations and interactions. This play follows the story of a con-man who attempts to deceive innocent people to pay him to teach them a new language. But there’s a catch: the language is fictional. According to Buro, the outlandish language is sure to make the audience burst into laughter.

“It’s this weird, cooky language that takes part of English and French and Spanish and all of these different languages and kind of mushes them together,” Buro said. “It kind of makes sense, and it kind of doesn’t.”

Along with comedic relief, a love connection also progresses throughout the story. Even though the characters use a language that no one understands, the play presents the message that love can prevail no matter the language.

Another one-act is directed by junior Josh Palmquist and is entitled “Philip Glass Buys a Loaf of Bread.” This musical act parodies the American composer Philip Glass’s work, and the narrative revolves around Philip Glass running into one of his old loves while buying a loaf of bread.

“It’s energetic, full of movement … and as a whole I think the production is just fun and entertaining. It’s the kind of theatre where you can just sit there and have a good time,” Palmquist said.

“Words, Words, Words” is a one-act directed by junior Lewis Johnson. This prop-based play experiments with the theory that if three monkeys typed for an infinite amount of time, they could eventually type Shakespeare’s “Hamlet.” It emphasizes the use of basic comedic timing and is the only play in this production to portray animals as the main characters.

“I would encourage students to go because it really gives them a chance to see a lot of different stuff as opposed to one show that has one major theme,” Johnson said.

There are often challenges in adapting the director’s ideas with the original storyline, and “All in the Timing” faced those similar challenging, yet rewarding obstacles. One specific hurdle to overcome was combining the six separately directed plays in a way that embraced their uniqueness while also maintaining the unity within the production.

“It’s interesting to have my own ideas about a show and see other people’s creative ideas, which then has helped me look at things in different ways and try to incorporate things that they do well into things that I don’t do well,” Palmquist said.

The directors hope that “All in the Timing” can give audiences break from the stress of spring semester with 90 minutes of hilarious and absurd storytelling. However, beyond the comedic relief, they hope students will be able to connect to the production’s themes.

“I think they can relate to the scenes with movie references, or love connections, or awkward things that happen when they meet someone,” Buro said.

Supporting fellow students at Concordia motivates students to go above and beyond what is asked of them; it empowers them and improves campus morale.

“This is our first experience directing, so it’s cool to help support students trying something new,” Palmquist said.