By: Annie Weier
In: Art, Events, Variety
With: 0 Comments 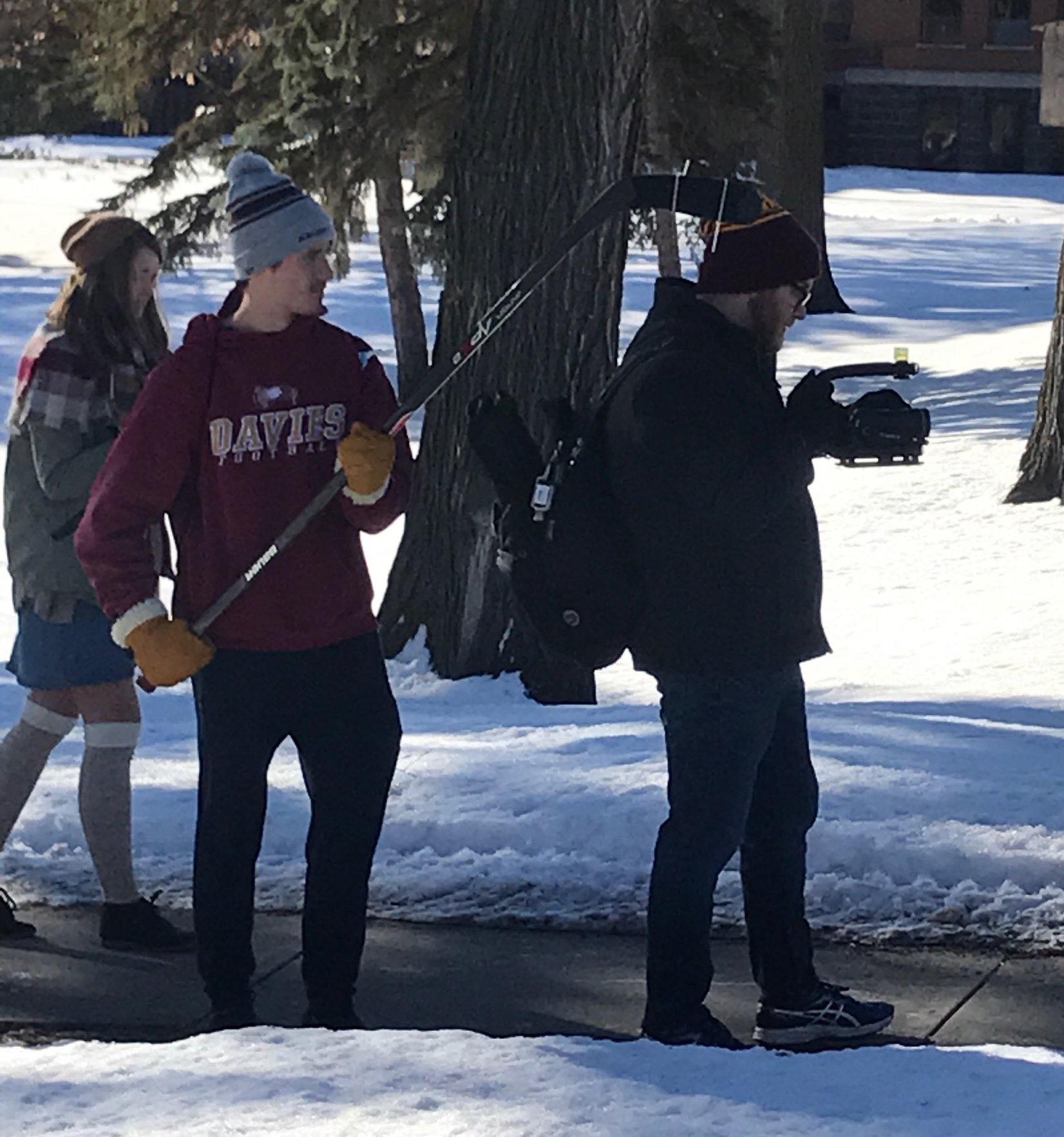 Lights. Camera. Action. These three words can make the process of filming a movie sound much simpler than it is, something that 14 Concordia students have learned firsthand over the course of this semester.

On Monday, April 23, two short films created by Concordia students will be premiered at the Fargo Theatre. Students in Dr. Dawn Duncan’s Film and Literature course were put into two teams to choose a short story, play, or poem to adapt into a film. They were able to experience the entire process of creating a film, from pitching ideas to the final editing and screening.

The two films are titled “What Remains” and “The Artist” and are directed by seniors Reilly Myklebust and Kaitlyn Alme, respectively. Both are based on works found in the public domain, as the budget for the films was nonexistent. “What Remains” is based on a poem called “Home They Brought Her Warrior Dead” by Alfred Lord Tennyson, while “The Artist” is an adaptation of the short story “The Vampire” by Jan Neruda.

Along with Myklebust, “What Remains” had five other students contributing to the film: Will Huff Towle, Kendra Benson, Sarah Schauer, Emily Hines, and Grace Duxbury. With Alme on “The Artist,” there were seven others: Rachel Giesen, Rachel McCloud, Nick Brandt, Turner Storm, Brady Drake, Mike Huynh, and Kristian Stenslie.

Myklebust, a communication studies major with a mass media concentration, is also pursuing minors in Spanish and film studies. She chose the class to pursue collaboration and creativity.

“Sophomore year, I started being more interested in filmmaking, as opposed to advertising. And now, I am really interested in long-form television,” she said.

“This just seemed like another great opportunity to work as part of a larger team,” she said.

Alme is an English literature major and a psychology minor. Film and Literature counts towards her major, but her prior experiences with Duncan also influenced her decision to take the course.

“I’ve had Dr. Duncan in two other classes, and I love her. I always learn so much from her courses, I had one more elective to fill for my major, so I decided to take her class,” she said.

The students have been working in their teams since the beginning of the semester, learning about four different film theories but focusing on the ultimate goal: an adaptation of a print source.

Duncan, who has taught the course each of the five times it has been offered, makes sure to help students differentiate between an adaptation and other forms of film.

“With an adaptation, you’re usually working with non-dialogue and a lot of description. It’s allowing the film to have its own life—visual storytelling. It’s not necessarily keeping fidelity to the story, but keeping the essence,” she said.

Though the process was collaborative and an important learning experience, there were many challenges faced along the way. The teams were not given any budget to create the films, so creativity was key.

“[Not having a budget] was probably the biggest issue. Basically, we just had to do creative problem-solving. We didn’t have a boom mike. But one of our crew members had a recorder that he uses, so we zip-tied it to a hockey stick to hold up and use,” Alme said.

For Myklebust’s crew, the lighting posed an extra challenge.

“We had some challenges on set with lighting. Like daylight fading, or being outdoors versus indoors,” Myklebust said.

Emily Beck, the executive director of the Fargo Theatre, speaks to the importance of the whole experience for students not only due to the inner collaboration, but the community connection as well.

“Film is a collaborative medium so the educational opportunities are endless as students work together to adapt and produce a short. They learn real-world problem solving and in many cases, step outside of their comfort zones. This project also connects them with a local nonprofit and the philanthropic efforts necessary to keep such organizations running. All in all, it seems to be a rewarding, unique, instructive, and memorable experience for the student participants,” she said.

Both Alme and Myklebust urge Concordia students to support both fellow Cobbers and the Fargo Theatre by attending the premiere, as all proceeds will go directly to benefitting theatre operations and maintenance.

“Please come see it, not only to enjoy something that I think is a really neat film, but also just to support this class and the students in it. It’s a really good way to spread the word about this class,” Alme said.

Duncan supports the students throughout the entire process and loves seeing the final result, as she knows the work that has gone into it.

“There’s something to be said for having to be inventive,” she said. “Watching their confidence grow warms my heart. It’s not just about doing, it’s about solidifying what they’ve learned in their minds and hearts.”

2018-04-19
Previous Post: Letter from the Editor
Next Post: Review: ‘Isle of Dogs’ may be Wes Anderson’s best work yet