By: Emma Eckberg
In: Campus, Featured, News
With: 0 Comments 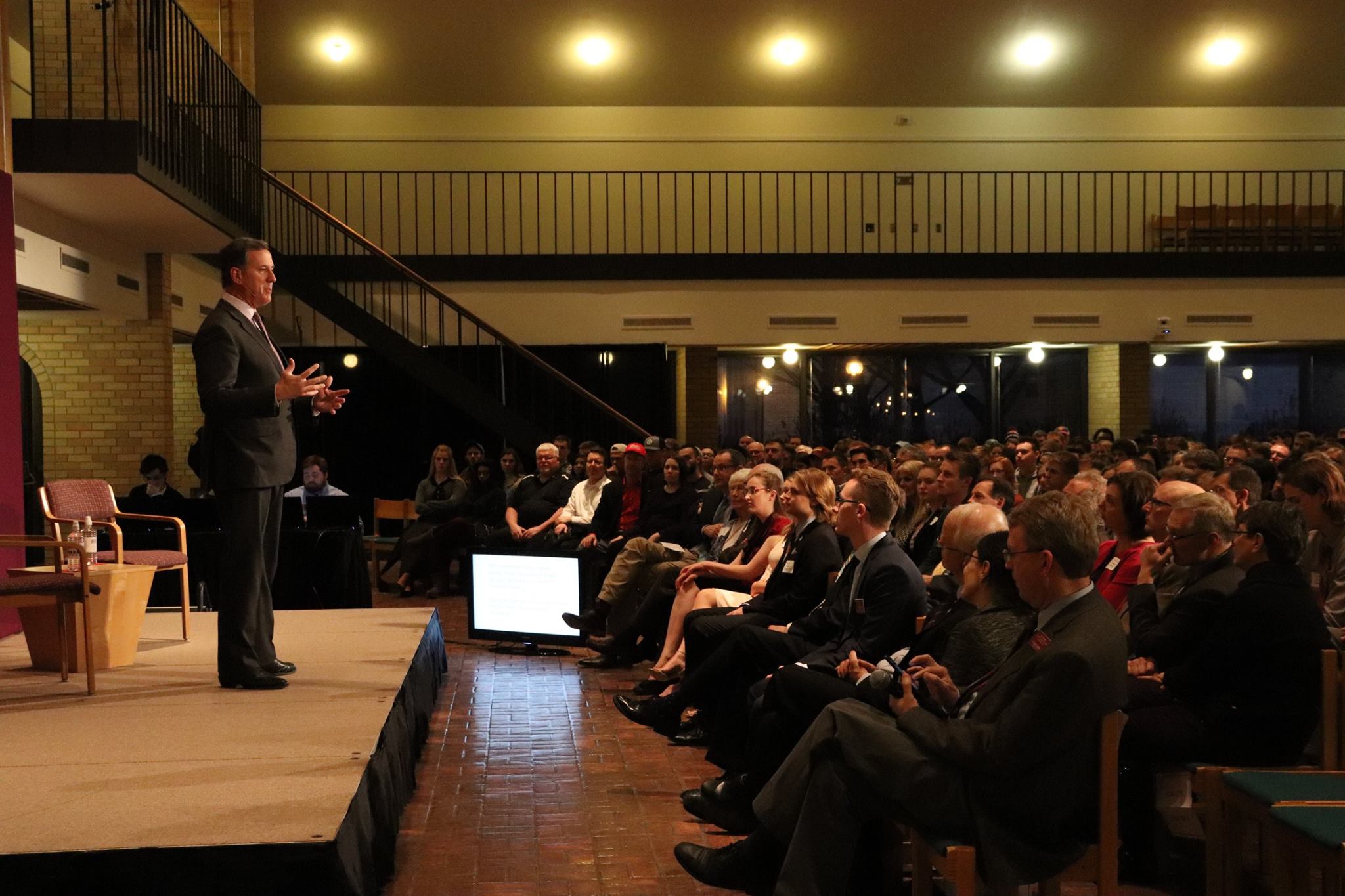 The political atmosphere was thick last week with multiple bipartian events occuring on Concordia’s campus. The first two, held on Tuesday, April 10, were somewhat at odds with each other. Former senator and Republican presidential candidate Rick Santorum spoke in the Centrum to a crowd of students, faculty, staff, and community members. The other event, Say No to Rick Santorum, was created by student organizations We Wear Beanies Too and the Sexuality and Gender Alliance. Their goal was to create an alternative event for those who wanted to take part in the political discussion but did not want to support Santorum by attending the speaking speaking engagement.

Santorum was brought to campus by the Concordia chapter of Young Americans for Freedom, who had encouraged him to talk on topics such as his legislative experience and his stance on abortion. Santorum touched on both topics in his initial speech before opening it up to questions from the audience. The questions, mediated by professor and chair of political science Dr. Michael Bath, were asked both electronically and through microphones around the event space.

President William Craft opened the speaking event, speaking about the importance of free and open discussion about politics in liberal arts, stating that “liberal arts are studies for people who are free.”

Santorum started off this speech by acknowledging the differences many of the attendees had from his political views, but he encouraged the crowd by noting their importance in the future of the country.

“I look forward to engaging in issues on your mind. To hear what young people—the future leaders of America—think,” Santorum said.

Santorum noted the struggles of political discussion today, most notably the polarization caused by social media and online news sources.

Santorum cited the other underlying problem of today’s political world as the apathy many Americans have towards politics.

“Most Americans do not care,” Santorum said. “We’ve democratized what goes on in Washington, but only for the über-active.”

Moving away from discussion of the future of politics and bi-partisanship, Santorum spoke on the next requested topic: abortion. Santorum explained that while America is fairly uncomfortable with the topic, it is something we will need to get used to.

“Roe v. Wade, in part or whole, will be repealed [in the next five years],” Santorum said.

Santorum noted that while not every person nor every state will make the same decision as he would, they should be allowed to make it for themselves.

“You’ll have to make a decision. You’ll have to learn about this issue. Actually think through it. You have the moral responsibility to make these decisions,” he said.

Santorum’s event lasted about an hour and a half, and the majority of the event was dedicated to questions. Some of the most commonly addressed topics were safe spaces, especially on college campuses, and the state of marriage in the United States. Santorum has a history of speaking on both topics, but the former led off with a new assertion about how young people are regarded and how they communicate.

Santorum stated that young people need to be given room to act their age and with adult responsibilities. Learning the limits of proper conversation and discussion is a part of growing up into adulthood, and the world needs to start letting students and young adults do that.

“We have to start treating young people with respect,” Santorum said. He further explained that the filtering of academic responses ruins how people communicate. “Talk about these issues without demonizing them. Then we don’t need safe spaces.”

Santorum, who is a devout Catholic, then turned toward how the Judeo-Christian philosophy can help move people beyond the need for safe spaces.

“My responsibility as a Christian is to love everybody, but I don’t have to agree with everybody or approve of your behavior,” he said. “You need to start thinking of bigger things. As Christians, we don’t need safe spaces because you think not of this world but the next.”

This was Santorum’s final comment on this question. It incited various members of the crowd and some even left the discussion at this point.

The last question of the evening also took on a scandalous note, as it focused on Santorum’s views on marriage. Santorum noted that marriage has eroded over the past 50 years, which has changed how many view marriage not as a partnership that is sacrificial and child-focused to something more mundane.

“Why do we have marriage, except for tax purposes?” Santorum asked. “If marriage is simply about two adults together, I can’t argue that.”

The alternate event of the evening, Say No to Rick Santorum, included a viewing of the newly rebooted television show “Queer Eye” and included time for discussion and conversation, both about the episode as well as the political climate and the event happening in the campus center. Kat Schwartz, co-president of SAGA, explained that SAGA felt there should be a constructive community-based alternative to Santorum’s speech.

“SAGA decided not to protest because we thought it’d be better to have open dialogue. But we didn’t want to support the event because of Rick Santorum’s homophobic, anti-LGBTQ past,” Schwartz said.

Attendance at the event, which was located in the King Intercultural Center, numbered over a dozen people for the majority of the time. Others, including faculty and President Craft, stopped by after the Santorum event to say hello.

While located halfway across campus, the Say No to Rick Santorum event was still connected to the political event, as many of the attendees had friends listening to Santorum.

“Many people were live-tweeting Rick Santorum and we saw that and a few people said ‘I’m glad I’m not there,’” Schwartz said.

The political discussion that began at the Santorum event on Tuesday continued on Thursday, April 12, as Concordia students engaged in a political debate. Seniors Andie Palagi, Cole Cymbaluk, Patrick Sorrells, and Taylor Vonderharr discussed questions related to the topics of abortion, immigration, and gun control. Palagi and Cymbaluk represented the Democratic party and spoke from liberal perspectives, while Sorrells and Vonderharr represented the Republican party and spoke from their conservative perspectives.

The goal of the debate was to provide differing perspectives and evidence-based discussion to the Concordia community.

“We hope that students will learn how to articulate their thoughts when shown both sides of an issue,” Vonderharr said.

The catharsis of the debate itself proved as important as the topics and arguments discussed. These events over the course of last week allowed for points to be made as well as opinions to be changed, not necessarily over the topic, but rather the people giving the statements.

“These events foster community and help people realize that all side of the political spectrum can be friends despite their differences in opinions and beliefs.” Palagi said.

Santorum concluded his speech by agreeing with the importance of mutual understanding:

“Understand your power,” he said. “And try and understand what the other side wants to accomplish.”