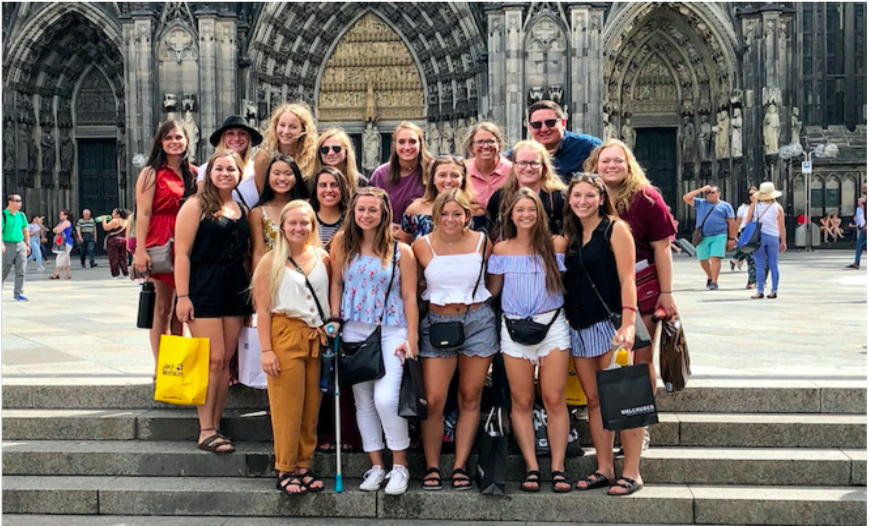 The Concordia men’s and women’s soccer teams each went abroad this August to explore, travel, and of course, play soccer. The men’s team adventured to Hungary and Czech Republic while the women’s team explored towns throughout Germany, Belgium, Netherlands, and Ireland.

Every three years, the soccer teams are promised an international trip as a team over summer break. These international trips provide an opportunity for team bonding as well as a recruiting tool for coaches hoping to sway potential commits. Previously, the men’s team ventured to Scotland and England and the women’s team to Costa Rica.

This trip, the men traveled throughout Budapest and Prague for ten days seeing the sights, attending three local soccer games, and playing four different teams. In Hungary and the Czech Republic, the men’s team played four games, finishing their trip .500.

Junior Noah Gjesdahl appreciates the unique opportunity presented by their international trip. Traveling Europe and playing soccer with your team is a bonding experience both on the field and off the field.

“It was a really cool chance to spend 10 days experiencing different countries and cultures,” Gjesdahl said. “As a team it was a great opportunity to shake the rust off a bit, get our legs back under us, and face some professional caliber competition.”

The men opened their season with a win against Buena Vista, and are currently 3-2 on the season. After finishing 5-10-2 last season and 9th in the MIAC, the team raises their expectations as they head into the 2018 season.

As the women’s team readied to head to Europe, they welcomed new head coach Rebecca O’Shurak to the team. As they experienced new cultures together, visited historical sites, and competed against local teams, O’Shurak quickly bonded with her new team.

“We had a really good time. We had 16 returners and I actually got to know every single one of them which was awesome,” O’Shurak said. “That’s not something you usually get to do prior to a season when you’re a first year head coach coming in when I did.

Playing three games abroad, O’Shurak took advantage of the opportunity to get to know the team and work through some things as they got comfortable with one another.

“We got to learn our system a little bit and try some things and see if it was even a real possibility. And I think it’s working for us,” O’Shurak said. “So it was good having those three extra games to figure some things out.”

Senior co-captain, Kirsten Bokinskie took a lot from the trip both as a team experience and as a chance to build together as a team with their new head coach.

“It was an opportunity for the older girls to get together and build on something for the future, and get to know the new coach,” Bokinskie said. “And to form personal relationships outside the soccer field which can transfer to successful relationships on the field.”

The women won their season opener at Buena Vista and are currently 3-1 on the season. After finishing 5-10-3 and placing 11th in the MIAC last season, the team is ready to raise the bar heading into the 2018 season.

“I think we’re going to surprise quite a few people,” O’Shurak said. “Anything that we do is icing on the cake at this point. I think that’s a low bar to set for the team, so we’ve set it a little bit higher than that.”

The men and women are both home this coming weekend Sept. 15 against Gustavus Adolphus. The women kick off at 1:00 p.m. with the men following at 3:30 p.m. Both games are at Jake Christiansen Stadium.