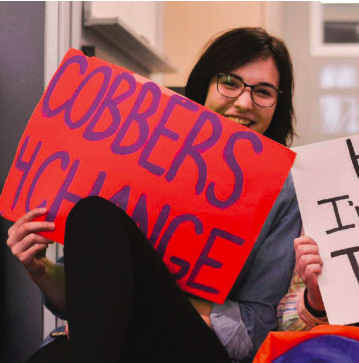 The recent and rather unexpected deactivation of Campus Democrats is surprising to many, especially for a predominantly liberal ELCA college such as Concordia. A small survey by the website Niche determined that 67% of responding participants at Concordia aligned with Democratic affiliation whereas 10% of the surveyed students self-identified as Republicans.  But as some may have noticed, there was no booth at Cobber Expo run by this organization. Many may be asking why, what happened to an organization that would seem to have the support of a larger part of the student body? Junior Natalie Siede is leading the charge to reinstate the Campus Democrats. Seide not only believes in the vitality of the project, but also has a strong belief in the prospects of community action as well as off-campus support.

“The goal of the Campus Democrats is to engage with the community on a grassroots basis,” Seide said.

Seide also hopes to create prospects to work with other schools in the area.

“We want to coordinate with the other Campus Democrats from MSUM or NDSU to see how we can best contribute to not only some of the bigger races, but also the local politicians and CD-7 [Congressional District 7] races,” she said.

The balance and equality of political representation is a theory that traces its roots back to pre-American times in feudal European society, but it wasn’t until relatively recently that political philosopher and economist James Mill stated that “in the grand discovery of modern times, the system of representation, the solution to all difficulties, both speculative and practical, will perhaps be found.” Although this is an outdated and widely interpreted philosophy, the message has changed very little: the importance of representation is a viable solution to perhaps some of the most trying and difficult times societies will come to face.

Sophomore class representative Katelyn Jenson had her own thoughts about the vitality of having an organization of Campus Democrats at Concordia.

“Even though we are a liberal campus, I think it’s nice for students to get together and learn to have conversation and get more information,” she said.

Although Concordia is a primarily democratic school, a place for intellectual conversation among those of similarly aligning ideological beliefs is still viewed as a crucial part of the campus dynamic. Just as more conservatively aligning students have a safe place to discuss their ideas and beliefs without constant opposition or criticism, the vitality of a democratic counterpart is an achievable necessity.

Among those students who are affiliated with the Young American’s for Freedom organization is Libby Halvorson, a freshman business major. Her perspective reflects what other students said about YAF member numbers in comparison to Concordia without the organization of Campus Democrats.

Halvorson sees the new organization as a booster for member numbers for YAF. When asked about potential growth, she stated, “Yes, I think so because people want to compete more and realize that there will be more involvement with the Democrats, so I should join this one [YAF] to compete with them.”

Taking this all into perspective, students speculate that not only will there be more campus activism from the Democratic leaning part of the student body, but also within other organizations such as YAF. The reinstatement of Campus Democrats will provide a continuous safe place for students to learn more, as well as actively participate in the democratic functions and workings within the community.