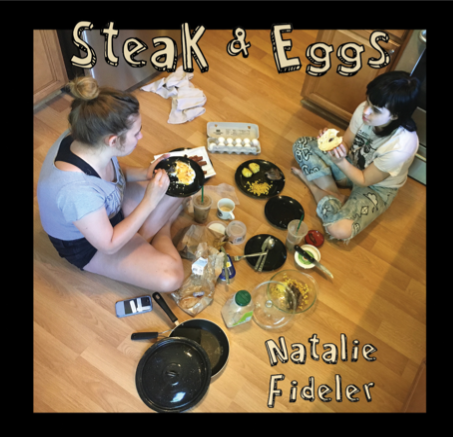 Senior music composition major Natalie Fideler is proving to be one of Concordia’s very own up-and-comers in the local music scene here in Fargo-Moorhead. Fideler is a singer-songwriter as well as a classical composer who is starting to get some exposure in the area. With years of experience under her belt, she will be releasing her debut album in just a few weeks.

Fideler was raised in a home of musicians filled with instruments that she was allowed to experiment with at a young age. Not only are her parents both musicians, but music is something that runs deep in her ancestry on both sides of the family. Her father is a self-taught guitarist and her mother played saxophone. Her paternal ancestry has a history in bluegrass and folk music, while her maternal ancestry has large roots in jazz music.

Fideler began performing on the violin and piano around the age of 3 and began writing her own music at the age of 8. Since she first began writing and playing, music has always been an outlet for Fideler to express her emotions. Writing and composing music serves as a way to provide commentary on things, work through things and to explain things so that listeners can relate.

Fideler gets her inspiration from several things, but as for her alternative pop music, she looks mostly to Liz Phair and Courtney Barnett, two of her favorite artists. Aside from those two, Fideler is driven by curiosity and a desire to learn new things.

“When I hear good music and and I think, ‘how did they do that? I want to learn how to do that,” Fideler said.

Fideler’s greatest initial inspiration to begin writing music was her sister, Siobhan. She and Siobhan collaborated on their first songs in their childhood and have continued to do so ever since.

“She [Siobhan] used to make up songs when we were little,” Fideler said, “Also, the first song that I ever wrote was about how much I missed her when she was at school.”

Composing classical music came quite a bit later. Fideler composed her first classical pieces when she came to Concordia during her composition lessons. She had always enjoyed writing music, but never classically composed until she got here. While her identity as a singer-songwriter has had several years to form, Fideler is still finding her place within the world of classical music.

“As for my classical [genre], I would say I don’t quite know yet,” Fideler said, “your undergraduate program is where you go to learn how to compose like everyone else. My own compositional voice is starting to form, but I wouldn’t say it’s totally formed yet.”

While Fideler grows and develops as a classical composer, she is taking the next leap with her popular-style music. After writing and performing music for years, Fideler is finally releasing her first solo debut album titled “Steak & Eggs” on Oct. 13. Her single, “Safety Blanket” was released last week, Sept. 13 and is available on all major streaming platforms. She wrote and performed everything on the album herself, from vocals to instrumentals.

Fideler is excited to share her work with everyone, but struggles to choose a favorite song on the album, but, if forced to choose one for everyone to listen to, it would be her single “Safety Blanket.”

“It’s got a lot of my compositional voice as a songwriter packed into it,” Fideler said, “and it’s got a really rockin’ guitar solo.”

If you want to keep up with Fideler’s journey with music, you can attend some of her upcoming events in the area: