Cobber graduate finds himself back in Hvidsten Hall of Music 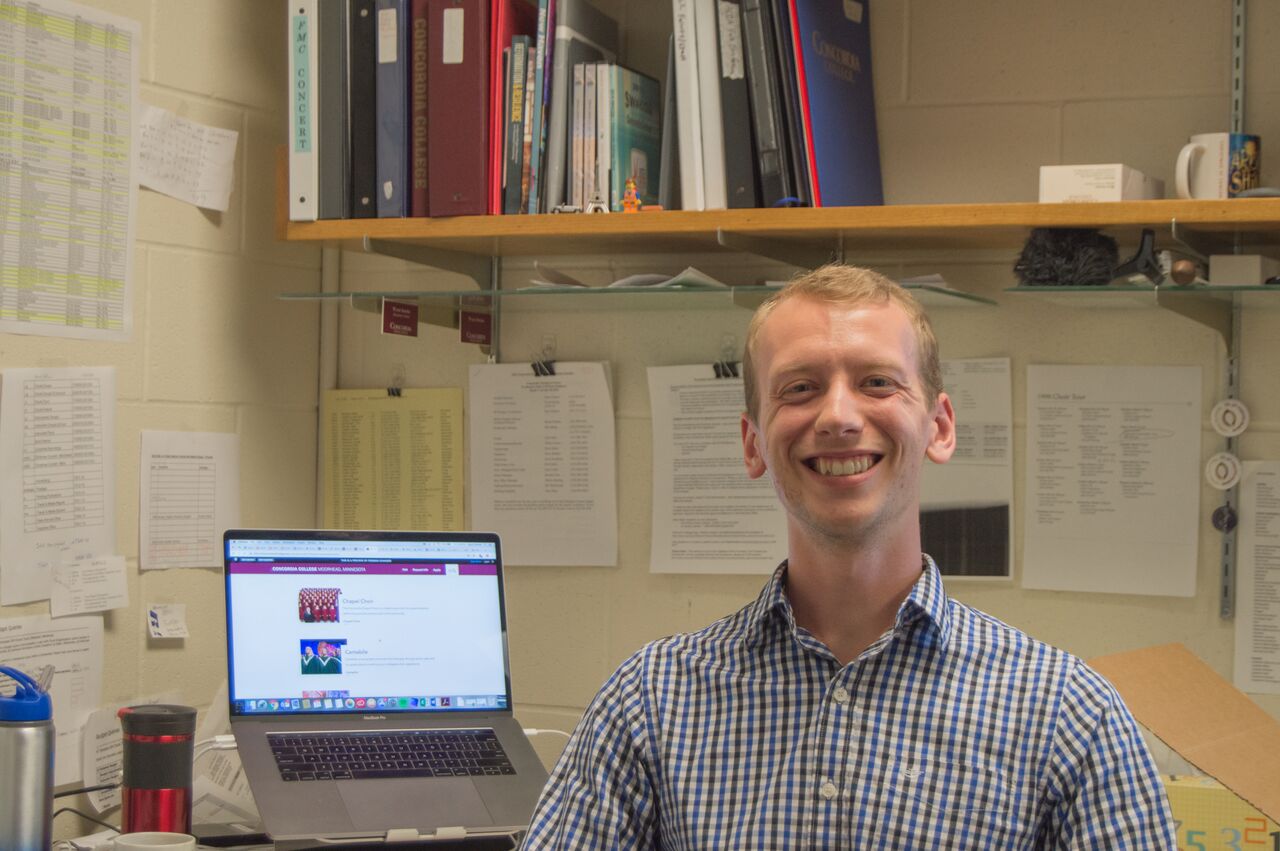 Wyatt Steinke went from the practice rooms and rehearsal halls of Hvidsten Hall of Music to his own office as the new Manager of Choral Activities here at Concordia.

“I really enjoyed the behind-the-scenes part of choir,” Steinke said.

While working as a student manager, Steinke said he loved being a leader of the logistical side of the ensemble, like concert stage set up and facilitating the annual Concordia Choir tour.

Steinke’s leadership roles propelled him forward after graduation. He was hired for his first teaching job in Park Rapids, Minn., as the 9-12 choir director at the high school.

“My plan since high school had been to be a high school choir teacher. Park Rapids has a great choral program and I was lucky enough to be doing exactly what I wanted to do,” he said.

After a year of teaching, Steinke found out that the Manager of Choral Activities position at Concordia was available from René Clausen, director of the Concordia Choir.

Even though this job was never in Steinke’s plan, after thinking about how much he missed Concordia’s choral program and talking to his fiancee, who is also an alum of Concordia, about it they both knew he had to jump at the opportunity.

After making the difficult decision to leave his teaching career, Steinke applied and got the job.

As the manager of choral activities, Steinke works behind the scenes of all the choirs to make sure they can focus solely on making music. He plans the Concordia Choir and Chapel Choir tours, produces the Christmas Concert, updates online content and much more.

“I do just about everything but the music,” Steinke said.

“We are really fortunate to have him here. I feel really comfortable and that we are not missing a beat,” Clausen said.

As for new ideas for the school year, Steinke is planning to expand his role into student-led vocal ensembles. As a former member of several student-led ensembles, he remembers the struggles of trying to organize performances, which is a big part of why he wants to help.

Steinke said, “I want to be a resource for them if they need help planning concerts off campus or fundraising. I hope to be a person that can walk them through those steps and teach them how to plan a concert, while taking a little off their plate.”

Overall, Steinke is optimistic about his first year as a staff member and loves being back at Concordia, a special place he gets to call home once again.