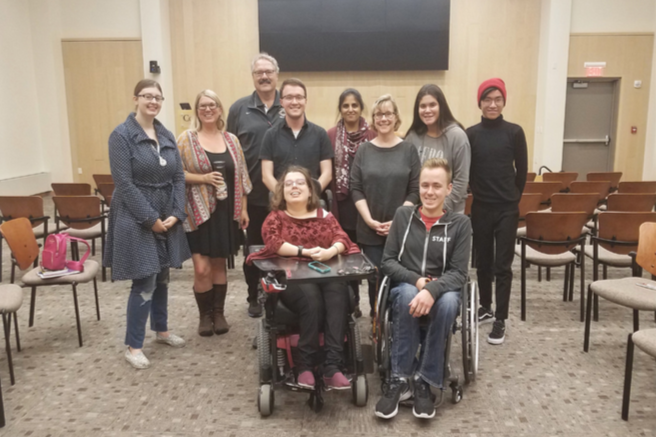 Although National Disability Month is in October, Concordia is making sure the students on campus get a jump on being informed. According to Census Bureau Reports, 1 in 5 people have a disability in the United States. Some disabilities can include vision impairment, hearing impairment, mental health conditions, brain injury, autism spectrum disorders, physical disability and intellectual disabilities.

On campus, the Counseling and Disabilities Center is located in Academy 106. Here, students are able to seek accomodations for their documented disabilities. The mission statement of the disability office states, “The mission of the Concordia College Disability Services office, in partnership with the college community, is to create an accessible, inclusive campus where students with disabilities have an equal opportunity to fully participate in and benefit from all aspects of the educational environment.” At the office, anyone is able to make an individual appointment with Matthew Rutten in order to determine eligibility for accommodations and services that are offered.

One person who benefits from these services is Sadie Mendenhall-Cariveau who has post traumatic stress disorder along with a physical disability that was sustained from a injury in the military, as well as degenerative disc and joint disease. She talks about how student events are not set up in a way that makes it safe for people with disabilities to maneuver in a secure manure.

“There are many times that I have had to miss class because of weather conditions making the grounds unsafe. I have missed class events and campus events because of my PTSD” Mendenhall-Cariveau said.

In order to bring more awareness to campus, on Sept. 25 at 7:30 p.m. in Barry Auditorium, there was a student lead discussion held by sophomore Hannah Papenfuss and freshman Noah Hanson. In this discussion, they each spoke about how their mobility in a wheelchair has impacted their lives on campus with both social situations and infrastructure.

Papenfuss spoke of an instance where a fire alarm went off in her dorm at 4 a.m. and she was left stranded in her room because no one was there to assist her into her wheelchair.

“We put guilt on the people with the disability rather than on the infrastructure,” she said.

When she went to the disability office, she left with a buddy plan in place to make sure that in the case of a fire alarm, or any other evacuation, she has two people that will assist her in these instances. In these cases, faculty, staff and residential assistance are used as a last resort to help. Hannah also said she finds people assuming that she can do less than she actually can, rather than pushing her to what she can do.

Hanson spoke of different social situations where there have been preconceived notions of being in a wheelchair. He spoke of condescending behavior and people acting overly nice to him.

“Treat people like me with the same respect you treat everyone else,” Hanson said.

He also spoke about the Park Region elevator glitching on the first floor and not being able to use it right away, which brought attention back to Park Region being the only dorm with an elevator in it. Hanson also touched on people walking on eggshells around him.

“Just because I’m in a wheelchair doesn’t mean you can’t tell me I’m wrong. See me as a person, not by my wheelchair,” said Hanson.

Overall, this event will hopefully have made awareness more common on campus in order to help our fellow students with disabilities to have a safe, and enjoyable time at Concordia, although there was a low attendance rate of 14 people for this discussion. While the discussion was fast-paced and there were many questions asked, this is still an example of the lack of awareness on campus.

Papenfuss and Hanson both agreed that while they want the campus to be more welcoming to disabled people, they also want the campus to be welcoming to the current residents as well. When asked what they could change, Hannah simply said, “A way to eat independently in (Dining Services).” As it is now, the shelves in the serving areas are too high for both Hannah and Noah to reach. They both agreed that this is one of the biggest issues on campus, along with the winter conditions and pavement of sidewalks.

“We are invisible, as students, as staff, as people because people rarely have to slow down or want to slow down for us. It would help if the campus was more aware as a whole,” said Mendenhall-Cariveau.

For information or to book an appointment for accommodations, visit the Counseling and Disabilities Center in Academy 106 or call 218-299-3514.