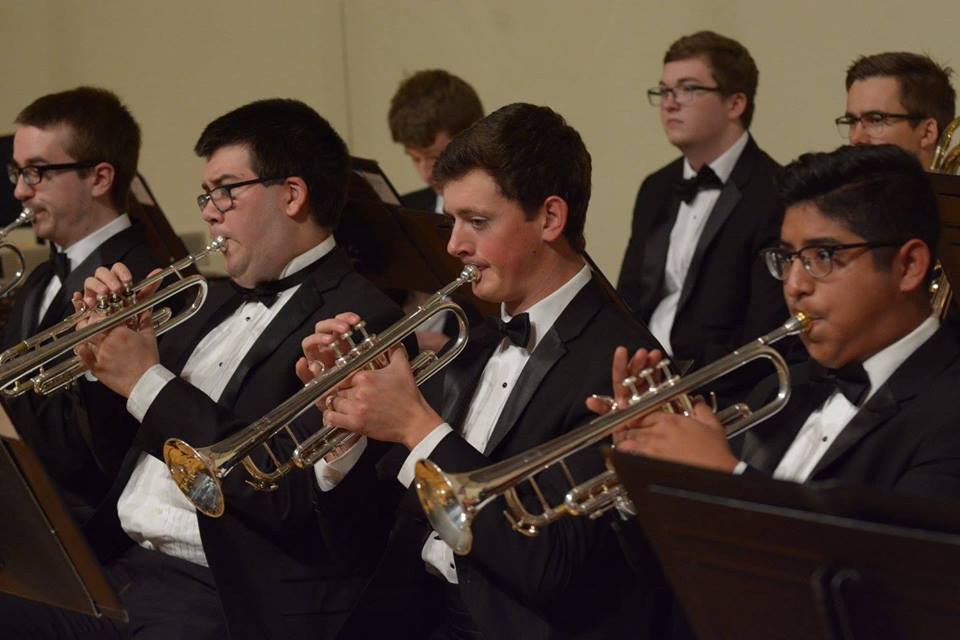 My favorite part of homecoming has always been the homecoming concert. This concert brings together the three flagship ensembles of our music program and it reminds many alumni of the band, orchestra, and choir programs what it was like to be performing in Memorial Auditorium. The concert on Saturday, Sept. 29 was dominated by extremely difficult, professional level music selections made by directors Peter Haberman, The Concordia Band; Kevin Sütterlin, The Concordia Orchestra; and René Clausen, The Concordia Choir. Overall, the concert was, as it has been for decades, a roaring success with a different standing ovation being given to each ensemble at the end of performance.

Haberman programmed only one piece to showcase The Concordia Band. One monstrous, behemoth of a piece for wind band that sent me tumbling through an array of emotions within the first ten seconds of its performance. Without much warning the lights in MA turned off and the band began its slow dip into “Deep Field” by Eric Whitacre. The piece is written about the Hubble Deep Field, an image taken in 1995 by the Hubble Space Telescope. Whitacre wrote the piece as a multimedia experience that originally used the cell phones of audience members and an app simply titled “Deep Field” as in house speaker systems to play some of the more ethereal sounds that were instead created by the band’s percussionists. Haberman elected to not have the audience download the app because it is no longer available for download on Android devices, and Haberman said he was “worried about phones not being put on airplane mode, and being distractions.” The mixture of audio and video was highly successful. He found the video that was displayed on YouTube. It was originally created by a fan of the piece who created visuals to line up with time markings in the music. Haberman was innovative with the hodgepodge display of the piece, and is what I believe made the performance the best I’ve experienced of “Deep Field.” On many occasions I had full body tremors while giant walls of sound were sent hurtling toward me in bombastic fashion. Haberman and the band outdid themselves in this performance, and I leapt from my seat the second the lights returned to MA to applaud and thank the performers for giving a life-changing performance.

Nikolai Rimsky-Korsakov wrote “Scheherazade, Op. 35” based on fairy-tale wonders of “Arabian Nights”. It is his most successful symphonic work, a staple of the classical repertoire, and incredibly difficult for any orchestra to perform unless it has a stellar concertmaster. The Concordia Orchestra performed the first and fourth movements of “Scheherazade,” and concertmaster of The Concordia Orchestra, violinist John Rose, stole the show. I wrote Rose’s name down in my notes on seven separate occasions. For his stunning duet with harpist Helen Hill, he demonstrated his tender high register, fiery and fierce middle range and his delicate touch to every single phrase. Rose made me hold my breath in anticipation for the ends of musical lines, and made me weep openly. This performance would not have been the same without him playing the solo line. After walking off stage, Sütterlin came back during the orchestra’s standing ovation and gave Rose a much deserved hug. I did have one bit of gripe with the orchestra’s sound Saturday night, that after some research has proven to be due to the performance space and my particular seat in the audience. Unfortunately, MA doesn’t carry low and middle register strings’ sound well at all, and from my seat in the audience I lost a lot of the gusto from these musicians’ playing. Clearly, there’s nothing they can do about this, but in my eyes it is quite unfair to limit the playing of these extremely talented musicians because of their performance venue space.

Last to perform, The Concordia Choir sang eight pieces that showed off their talent and their dedication to the longstanding choral tradition established in Minnesota and specifically at this school. Clausen kept the pace of the concert fast as each piece had minimal time in between, and while every single piece was of high quality two of them stood out from the rest. “Wondrous Love,” arranged by Paul J. Christiansen and “My Soul’s Been Anchored in the Lord,” arranged by Moses Hogan were the highlights of choir’s performance. To say “Wondrous Love” was beautiful is a disservice to the way that special guest conductor, Dr. Erik Christiansen, son of composer Paul J. Christiansen, shaped the choir with each subtle movement of his wrists. The piece was bookended at the beginning with a soli performed by the unison tenor section, and ended with a solo sung by second year member of the choir Max Trochlil. When both of these sections were performed there was a quiet yet stalwart air to the ensemble that permeated throughout MA. Finally, the choir sang Hogan’s piece. A spiritual with tenacity and dance that clearly and vehemently spread to every single member of the tenor and bass sections “My Soul’s Been Anchored in the Lord” was raucous and free because Clausen allowed the choir to sing without assistance in this passion-filled performance.

The homecoming concert always displays the best and brightest performers in Concordia’s music program, and this year was no exception to that rule that has been set for decades of future members of these stupendous ensembles. If you find yourself with 30 minutes of free time on hand, I suggest you listen to one of the three ensembles as they bare their souls in music making by tuning in to Concordia’s UStream account.