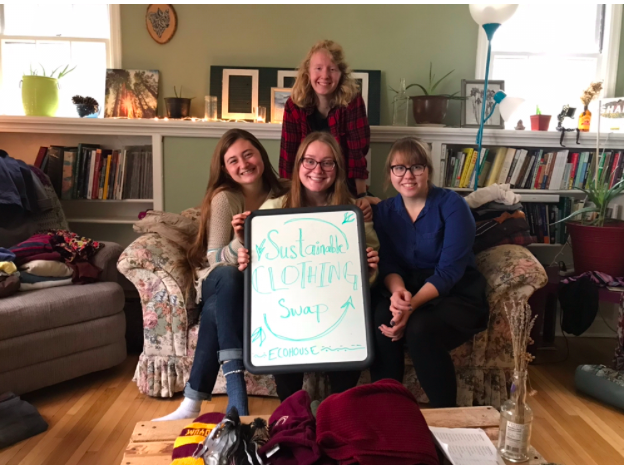 The EcoHouse held a clothing swap Oct. 6 from 1-5 p.m. The event allowed students to bring old unwanted clothing to swap with other students, or simply gave them a place to bring old clothing to give away for other participants. The point of clothing swap was to help further Concordia’s sustainability initiative. As part of a soft requirement to living in the EcoHouse, residents must head a group project and a personal project. The clothing swap was headed by Mariah Norrell, who is currently double majoring in music and global studies with a minor in environmental studies. She hopes that the clothing swap can be a yearly event as an easy way to increase student body participation in the EcoHouse and to further their message. There are plenty of sustainable perks of a campus-wide clothing swap.

“The clothing industry is kinda wasteful,” she said “When people are done with their clothes they either donate them or throw them away.”

She went on to explain that they wanted to create easy ways for college students to be more environmentally friendly as well as create a low commitment way for them to would be a money-saving opportunity. She explained that due to the cost of going to college and living away from home, having a close and cheap way for students to update their wardrobes would be a good way to contribute to the student body and the public as a whole.

The EcoHouse, founded in 2012 as part of Concordia’s attempt to be more environmental conscious, was a pet project of President Craft.

Alyssa Armstrong,a senior majoring in environmental studies and English writing with a minor in social activism is another resident in the EcoHouse.

“It’s basically a living laboratory where we come to together as a community of students,” she said.

The EcoHouse currently has 4 residents: Julia Kohler, Kaitlin Molden, Mariah Norrell and Alyssa Armstrong, and is led by Jackie Maahs, the sustainability coordinator of Concordia. Some of the things that residents do to reduce their carbon footprint include using a geothermal temperature regulation system instead of conventional air conditioners and heaters. This is done by pumping air from pipes deep in the ground into the building, and it is also 100% renewable. The residents also avoid paper towers and disposable objects. They shop locally to reduce their carbon footprint and their furniture is also recycled. They also have plans to have a garden in the front of the house with native plants such as wild bergamot, rose milkweed and wild blue indigo.

Kaitlin Molden, a resident of the EcoHouse, has plenty of reasons for applying to live there.

“I wanted something different, I thought. I’ve lived in the dorm for two years and I kinda got used to the wasteful mentality and wanted to be more deliberate in being more environmentally conscious,” she said.

To be a resident The EcoHouse, residents had to fill out an application explaining why they wished to live in the house and do an interview once the application was accepted. They come in the summer, ahead of the school year, to prepare. The EcoHouse is always planning activities, and looking for ways to engage with the community so be on the lookout for any new and fun things they might come up with.