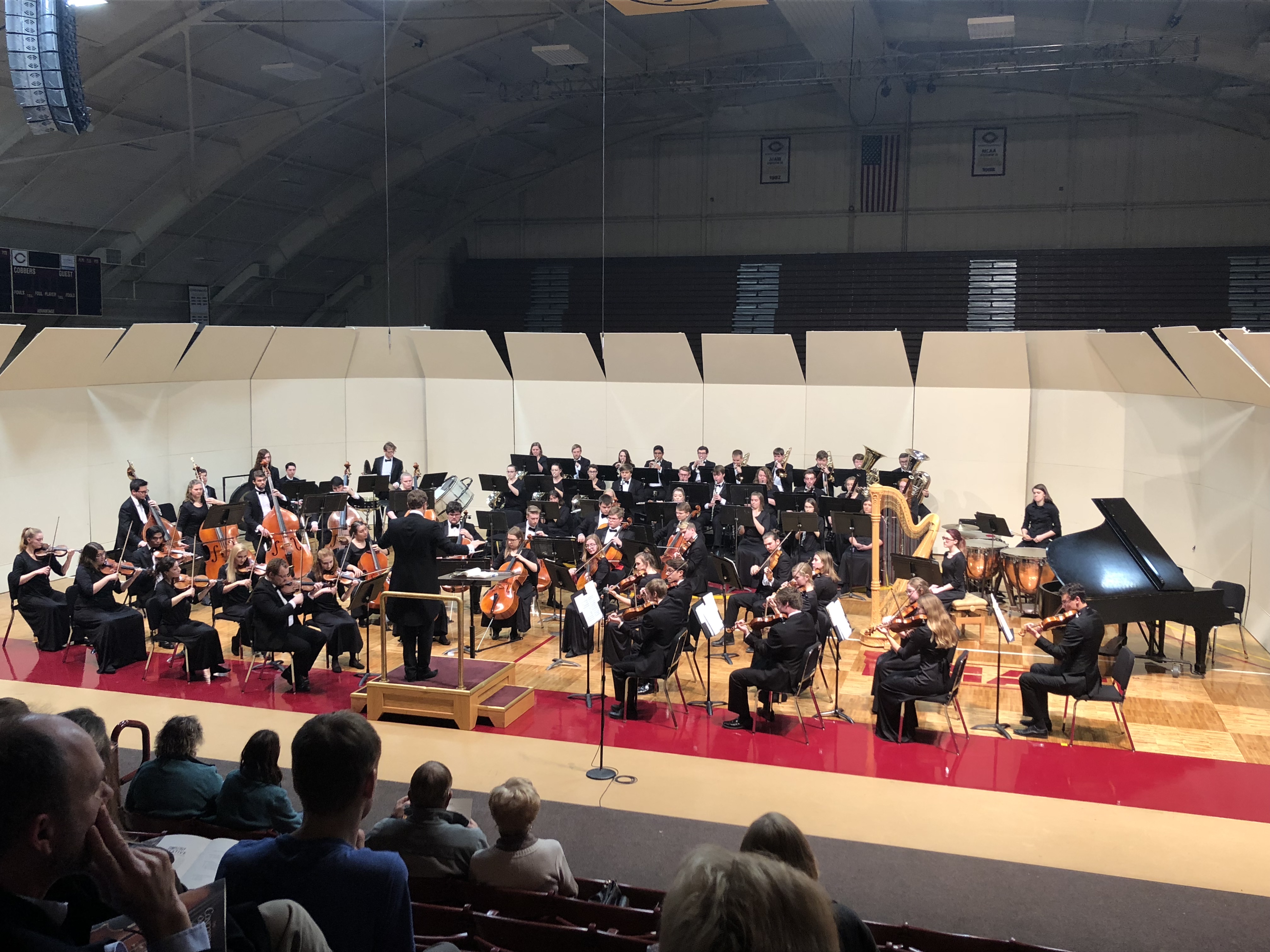 For the first time, Concordia College had an entire week for fall interim in the middle of the semester. Some students had this lead to fulfilling PEAK requirements, for others it meant having a few extra days of break and for members of the Concordia Orchestra, this meant a full week of tour through Wisconsin and Minnesota. This tour ended on Sunday with a concert in Memorial Auditorium (MA) at 2 PM. The concert was dazzling and surprisingly, poorly attended. Concordia student and orchestra trombonist Knut-Erik Kjöge Kjöge estimates that Memorial Auditorium was only a quarter full. Despite the poor attendance, the orchestra played phenomenally.

For the next piece Sütterlin welcomed Nat Dickey, trombone, to the stage to perform Jim Pugh’s “Concerto for Trombone” in three movements. Dickey’s solo playing was sweet and lyrical. The orchestra was equally tantalizing, and their task just as difficult. The orchestra did not just play simple lines under Dickey’s. It increased the emotional gravitas of his playing with each movement, especially in the second. The orchestra didn’t allow Dickey to just steal the show, instead they provided the cornerstone for Dickey, which enhanced the overall sincerity of the performance.

Before the third piece of the day, “Symphony No. 3” by Florence Price, Sütterlin came to the mic to explain his programming for the orchestra’s 2018-2019 season. The season is “featuring compositions by underrepresented composers” in every performance of the year. This is an inspiring undertaking that Sütterlin has chosen for the orchestra. Florence Price was an African-American female bravada of her day. Her symphony was new to me, like I’m sure it was for almost everyone in the audience. It was buoyant, playful, and reminded me of compositions from 1990s Disney films scored by Alan Menken and Howard Ashman.

Finally, the orchestra returned to Nikolai Rimsky-Korsakov’s “Scheherazade.” I spoke in depth about the performance of the first and fourth movement of this that the orchestra played at the homecoming concert, but Sunday’s performance was in a completely different league than the homecoming performance. I had trouble hearing low and middle strings during the homecoming concert, and after the first sound I knew this wouldn’t be the case any longer. John Rose, once again, played a beautiful first violin, but much like they did with Dickey earlier in the concert, the orchestra now matched Rose throughout all of his playing. The second movement, “The Kalandar Prince,” was highly indicative of the differences in this orchestra in a short month’s time. There was playful contrast in dynamic expression, and Jack Fiskum, bassoon, opened the movement with a beautifully attentive and connected solo. In the third movement, “The Young Prince and The Young Princess,” there was a feeling of dance that brought the entire performance into a tighter focus than at the homecoming concert. Now there was joy and some playful sass from the players. The theme originally played in Rose’s solo returns late in the third movement like an old friend, and the fourth movement took to contrast between piano and forte to an extreme that put me on the edge of my seat.

If you were still traveling back from the fall interim, or too busy watching football on Sunday, I suggest you tune into the Concordia archives on UStream to watch the Concordia Orchestra’s definitively bold and wonderfully brash home concert.