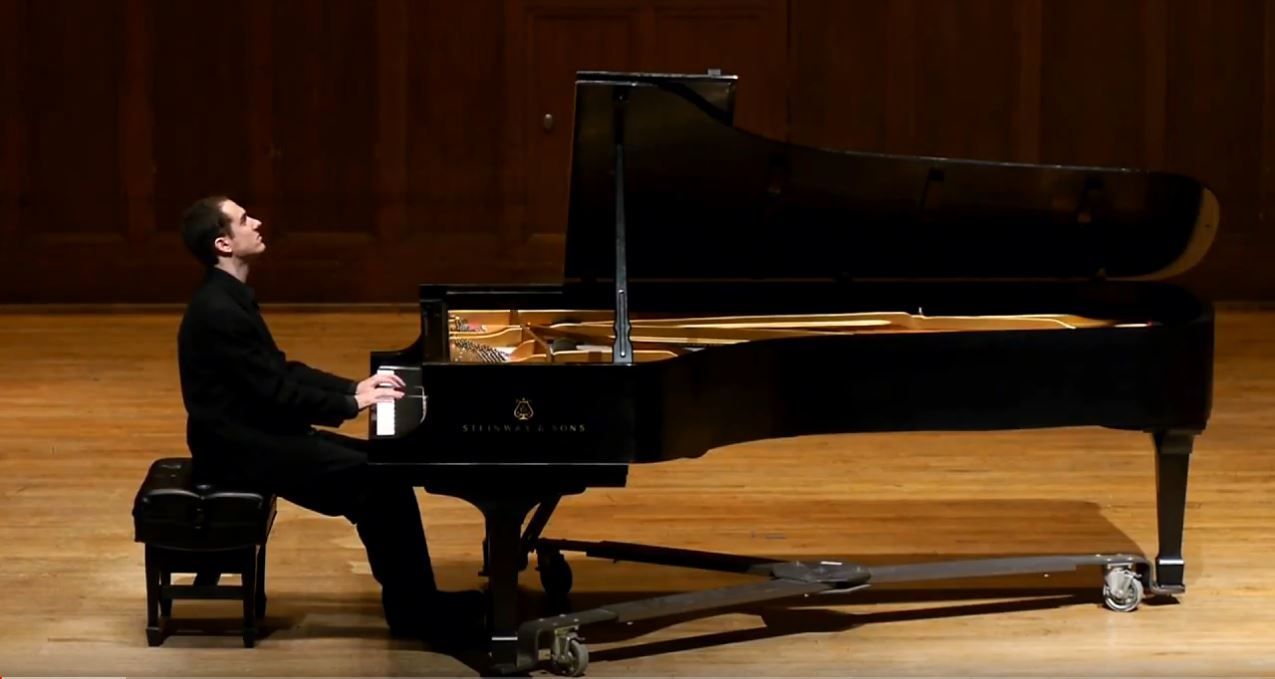 From beloved children’s music, demanding pieces from the common piano repertoire and even some Led Zeppelin, Matthew Cataldi’s program had it all. Cataldi, piano, performed in the Christiansen Recital Hall at 7:30 pm on Friday Nov. 2 as a part of the department of music’s guest recital series, and he was breathtaking. His concert was composed of four pieces in the style of variations. Variations take any source of melodic material and expand upon ways each melody could have been treated differently harmonically, rhythmically, dynamically or other adaptations from the original composer.

Cataldi took the stage, and after a very short applause, he immediately opened the night with Mozart’s “Twelve Variations on ‘Ah vous dirai-je, Maman’.” “Ah vous dirai-je, Maman” is a French tune that almost every single child would be able to recognize as the tune to “Twinkle, Twinkle, Little Star” or “The Alphabet Song.” The opening is a very simple performance of the tune we all know, but just as the audience got comfortable with the plain melody, it gave way to lightning fast runs and dynamic contrast. Cataldi gave a performance unlike any I’ve seen this year on campus because he was in his own world. The audience may as well have not been present. We were merely eavesdropping into the storytelling of this master as he flirted with the ivory in front of him. This was Cataldi’s greatest strength. It didn’t seem that he was playing for the audience, but to cater to the music and composer.

Cataldi then played Aaron Copland’s “Piano Variations,” which was intriguing and aurally challenging for the audience, but astounding all the same. After a brief intermission Cataldi took the stage once again to address a piece on the program that immediately caught my eye. He opened with the words, “So you may be curious about this next piece.” Written by Cataldi himself, “Variations and Fugue on a theme by Led Zeppelin” was a surprise, and more importantly, an absolute delight. Cataldi mentioned that this was only the second time the piece had been performed for a live audience. Within three bars the audience could recognize Zeppelin’s “Stairway to Heaven,” and a nervous excitement took over the room. The piece outlined several different styles of composition including classical, ragtime and small musical quotations were hidden within the music from composers like Bach and Beethoven. This piece had me feeling like a kid in candy store, and had something for every type of listener. Here, Cataldi wasn’t your typical, classically trained pianist. He was a rock star and he brought the house down.

After all of this, Cataldi still had to play, in his own words, one of the most “daunting pieces in the repertoire.” This was “Totentanz” by Franz Liszt. I was still too shell-shocked from the Zeppelin variations to take notes on Cataldi’s reverent and heroic performance of Liszt’s brilliance. Here, Liszt wrote an incredibly difficult piece. On top of its primary difficulty, it is normally performed with full orchestra, and instead of bringing a section of strings with him, Cataldi performed a transcription of the original orchestral arrangement. As a result, he played the melodic and harmonic material from every other instrument in the orchestra, in addition to the already menacing piano line. After my initial reactions to the previous piece subsided, instead of picking up my pencil to critique Cataldi, I instead sat back and enjoyed every fleeting moment of his audacious and admirable performance.

Cataldi took in every single note for its worth. There wasn’t a moment when I thought he was being too emotional nor a moment when I thought he rushed through a dire moment of the performance. Unfortunately, Cataldi’s performance has not been added to the CRH archives just yet. The moment I know it is uploaded I will make sure any readers have the link to Cataldi’s excellence via one of the official Concordian social media pages as this is a treat that no fan of any type of music should miss out on.