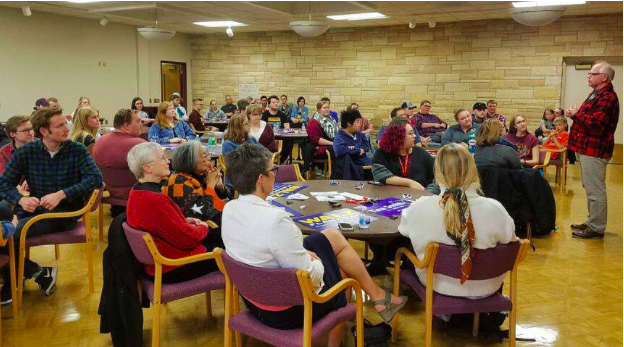 It’s always exciting for voters to meet local politicians. It provides a chance for them to voice their concerns, get to know their candidates better, and become better informed citizens. Students at Concordia College had this exact opportunity when Minnesota Senator Tina Smith and gubernatorial candidate Tim Walz came to speak on campus on Oct. 30.  The representatives spoke about the most significant issues facing the nation today and took a number of questions from students. For many of the students present, the 2018 midterms are the first election they voted in.

“This is a really cool opportunity” said junior Maddie Harvala. “We don’t get to normally meet our representatives in person, so this is a great chance to learn more about politics and the problems facing the country.”

Both politicians have a history of service to the country and ran for election on Nov. 6. Walz served in the Army National Guard for 24 years and was honored in 1989 as the Nebraska Soldier-Citizen of the year. Following his service, he taught geography at Mankato High School. He later decided to run for Congress in 2006 and beat incumbent Republican Gil Gutneckt in the general election. Upon swearing in, Walz became the highest-ranking enlisted soldier to ever serve in Congress, and only the fourth Democrat to represent Minnesota’s 1st District. He currently serves on the House Agricultural Committee, Committee on Veteran’s Affairs, and the Armed Services Committee.

Smith also has experience working in Minnesota politics. She first became involved in the early 1990s by volunteering at several local Democrat’s campaigns and would later go on to manage several of them. Her first run at office was in 2014, when she was selected by Mark Dayton to be his running mate in the gubernatorial election. In 2017, she was selected by Gov. Dayton to fill the Senate seat vacated by Al Franken. Although many speculated that she would only serve for a temporary period, Smith announced that she would be running for election in 2018. She currently serves on the Committee on Agriculture, Nutrition, and Forestry, Committee on Energy and Natural Resources, Committee on Health, Education, Labor, and Pensions, and the Committee on Indian Affairs.

The candidates spoke about many issues facing the nation, such as LGBTQ rights, immigration, and climate change. They also recognized the divisiveness present in politics. Walz addressed the recent mailing of more than a dozen explosive devices to prominent democrats.

“You know what the rhetoric is like. Minnesotans have an opportunity, and I would argue all of us in this room have a responsibility to turn this around. Our job is to create a better a future, and that is what this election is about,” he said.

The students present had different reasons for attending the event, but one thing everyone had in common was that they wanted to become better informed about important issues.

“I am a republican,” said one student. “But I came because I wanted to learn more about the other side of the aisle and become a more rounded voter.”

“I’m here today so that I can learn more about politics, and hopefully my family and I can have more civil conversations about issues” said first-year Maddie Backes

Smith agreed that the divisiveness in politics is a significant concern of her constituents, something she’s learned from numerous conversations.

“I have been all over the state, and one thing I hear from almost everybody is that they want to have a civil conversation about the future of this country, but they are afraid to because of all the anger present that shapes our politics. It doesn’t feel safe for a lot of people, so it’s our job to reshape that conversation and help introduce respect to the equation,” she said.

“We need to remind people of what unites us instead of what divides us. When you go to the polls, please think about how we can make this nation a better place for everyone.”