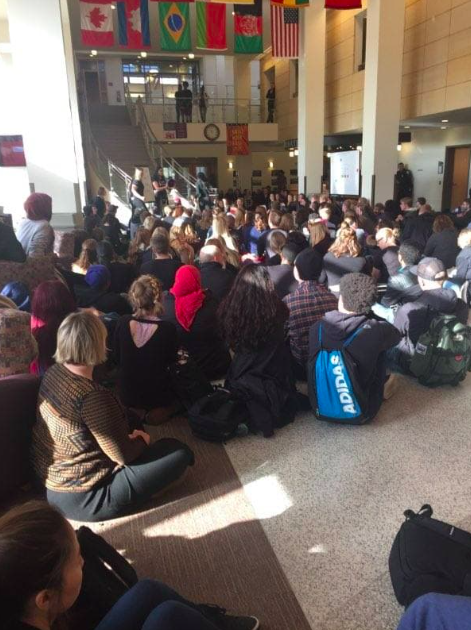 Last year, on Halloween night, posters with the message “It’s okay to be white” popped up on college campuses across the nation, including our own. The origination of the posters, both this year and last year, came from a 4chan thread encouraging people to put up the posters to provoke liberals. After discussion for a few days last year, it was mostly dropped. But yet again this Halloween, the posters made a second appearance, again across the country. This time though, it prompted not only discussion, but a walkout, formal motion from SGA, and other actions from students to attempt to counter the message.

Friday, Nov. 2 a student planned walkout took place in the atrium. Students who attended were encouraged to wear black. In a position statement by SGA, the members of SGA supported the walkout. Jake Hanson, president of SGA, expressed his support for the students who attended.

“We support what the walkout stood for,” Hanson said. “There was a lot of student support and people trying to make students aware of what the posters mean and why they aren’t okay.”

Amena Chaudry, Diversity Coordinator for Student Support Services, spent six hours in the Frida Nelson Lounge in Fjelstad the day after the posters were put up to give hurt students a space to be heard. Chaudry said the common thread she heard this day was that many minority students feel like they already don’t belong as a part of the community based on experiences they have had. The posters were like salt on a wound, and the walkout was a response based on the posters’ exacerbation of their sense of not belonging.

On top of supporting the walkout, the members of SGA demanded updates on the formation of a bias prevention and response team, a request from the “We Wear Beanies Too” Movement that was formed in November of last year. Keaton Erickson, vice president of SGA, explained what such a team would consist of.

“Based on how other colleges do it, the team would provide a response to incidents like this, as well as help educate students and staff on diversity and have a set approach to what happens from day one onwards for an incident like this,” Erickson said. “There would be benchmarks for each day of a response so that, as a campus, we would know what step was being taken and how the process is continuing.”

Investigations into who put the posters up are ongoing. Chaudry warns against simple punishing the perpetrator and moving on, though.

“When stuff like this happens, there’s this sense of urgency to make it go away,” Chaudry said. “But I would call on the college to use the incident to ask how it defines community and what values to honor as a community… I urge the college to not just rush to a superficial solution.”

Besides the walkout, one student has found a way to reach out to people as an individual. Isaac Novak, a senior graphic design major, designed a pamphlet titled “A Privileged White Man Explains Privilege to Privileged White Men.” In the pamphlet, Novak explains how the posters are harmful, the definition of white privilege, and how understanding privilege can help students recognize issues in society and promote change. The pamphlets are distributed around campus in areas of high traffic, such as the post office.

At least one poster claiming “Diversity is beautiful. All are valued and welcome at Concordia” was hung in response to the posters. The message is one of the three key points in Novak’s pamphlet.

Novak’s pamphlet addresses a problem that Chaudry thinks is a big issue. Chaudry said students experience both microaggressions and more blatant racism in their day-to-day life on campus.

“We try to blame these incidents on outside sources, but that doesn’t match what students here have experienced,” she said. “We need to find and address what is wrong with the campus culture as a community.”