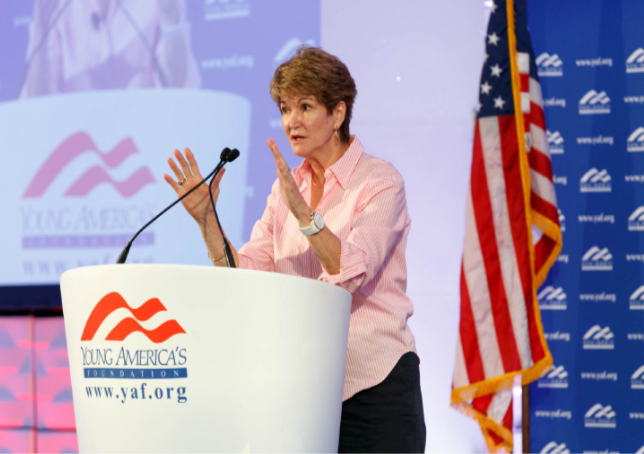 Concordia recently welcomed Angela “Bay” Buchanan to its campus, a conservative political commentator who served as former Treasurer of the United States between 1981-1983. After her career in Washington, Buchanan became better recognized across the nation for her roles in the media, appearing regularly as a commentator for programs on CNN and MSNBC. Today, she travels around the country as a public speaker for both corporations and college campuses.

Buchanan saw her political career take off when she worked as the national treasurer for Ronald Reagan’s primary campaigns in 1976 and 1980. She would go on to be heavily involved in the administration, and continued to act as treasurer for Reagan’s general election campaigns in 1980 and 1984. When President Reagan appointed her as Treasurer of the United States, Buchanan became the youngest person to serve in this position at the age of 32.

As both an author and media personality, Buchanan is recognized as a prominent political commentator. She was invited to speak at Concordia by Young Americans for Freedom, Concordia’s conservative politics club. Because there are not frequent conservative speakers on college campuses, this was a rare opportunity for the group. It was also rare for Buchanan, as she had never visited the Fargo-Moorhead area.

Buchanan appeared on Dec. 3, speaking from 7:30 p.m. to 9:00 p.m. in the Grant Center. She began the event with a brief thirty-minute speech about the state of U.S. politics, during which she gave insight into the Trump administration. Trump’s presidency has had a polarizing effect across the nation and serves as a contentious topic in many college communities.

“’America First’ is really the theme, or agenda of this administration,” Buchanan said. “It’s been his message since first being a candidate, after he became president-elect, and during his current (role) of president now. It’s important to recognize this so we can understand what is driving our politics, and what our President is all about.”

Buchanan attributed Trump’s rapid popularity to his lack of political correctness, and furthermore his “insight and courage” to speak out against elitism. She notes that before Trump was elected, there was a sense within the republican party that misspeaking could cause controversy, hurt feelings and possibly divide the party. However, Buchanan says that this created problems for the country and, in her own words, “made the republican party a lesser party,” as it made conservatives more hesitant to share their beliefs.

“Americans are not hesitant people. We like to tell you what we believe, because it’s guaranteed to us by our First Amendment right. It’s in our nature to want engaged discussions,” Buchanan said.

Being politically correct is an issue which is now relevant today more than ever. After Trump’s election, there has been a significant rise in inflammatory rhetoric from politicians of both parties, but especially from a faction of conservatives known as the “alt-right.” While Buchanan and many other conservatives argue that “political correctness” is simply an intimidation tactic used by the left, liberals argue that potentially offensive language perpetuates stereotypes against disadvantaged groups, and can encourage discrimination against minorities. This became a heated debate at Concordia following the display of several “It’s Ok To Be White” posters across campus.

One student was particularly concerned with this issue, characterizing the administration’s response as “borderline censorship.”

“How do we promote free speech on campus when it tends to be limited by school officials, and even other groups?” he asked during the hour-long question and answer period.

Buchanan agreed that free speech is currently an issue for conservatives in college, but noted that this may give them an advantage during the future.

“If you continue to practice debating and challenging your teachers, you will be refined and you will come out of this college ready to take on the real world. Conservatives are bolder, and this gives you an advantage in the workplace,” she said.

While Buchanan’s comments were warmly received by conservatives in the audience, she alienated some more liberal-leaning students.

“I appreciate hearing thoughts from both sides of the aisles,” said student Alex Conner. “But some of the things she said about immigration and ‘fake news’ seemed kind of ignorant.”

It was a unique opportunity for the college to host a conservative speaker. While Buchanan’s opinions may have divided the audience, it is important for the student body to receive a diverse array of influence.

2018-12-12
Previous Post: Bias intervention response team formed to educate and respond
Next Post: The Office of Diversity makes progress and plans for spring