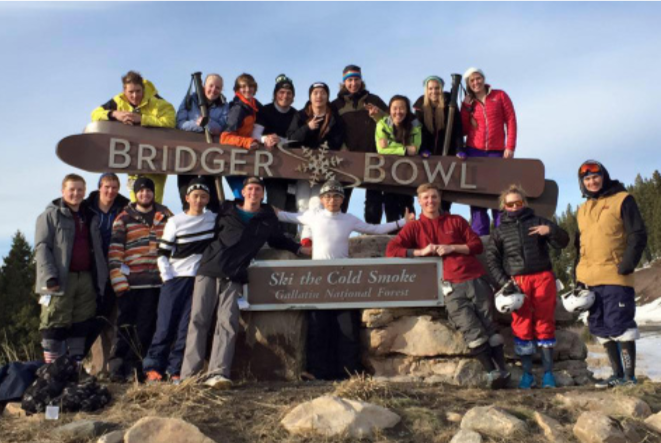 The flatness of Moorhead can lead to seasonal depression for many, but a select group of Cobbers get hit harder than most.

For the Alpine Ski and Snowboard Club, Moorhead doesn’t provide much more than Olin Hill — hardly a black diamond. Instead, winter’s arrival starts the countdown to the highlight of their season. Each year the group takes a vacation over spring break to a ski resort somewhere in the Western United States, usually Colorado or Montana, for some fun on the slopes.

“The Fargo-Moorhead area doesn’t have a lot of mountains or hills,” Scott Nelson, one of the club’s three student leaders, said.

You can say that again.

“We are just trying to give them an experience they aren’t used to. We go on one trip a year to Colorado or Montana and ski for a week. We also do weekend trips to places in Minnesota.”

Nelson, Cameron Jenson and Tate Hovland are the three students in charge of the group, and they are tasked with organizing the trip this year. While no location has been set, the tentative plan is for a stayover somewhere in Montana.

The Alpine Ski and Snowboard Club has been around for four years now and has offered a home for experienced skiers and snowboarders while introducing some Concordia students to something that they had never tried before.

The college’s funding defrays the costs for members who choose to go on the annual trip, but joining the club doesn’t mean you get a free trip to the mountains every year.

“Concordia contributes some money for the cost of lodging and transportation, but participants are responsible for paying for ski/snowboard rentals and lift tickets,” Jenson said.

The group is not about competition, but rather spending time with friends who share a love for the slopes. Over the past few years, the club has visited Lutsen in Northern Minnesota, Bridger Bowl in Bozeman, Mont. and Whitefish Mountain Resort in Whitefish, Mont. on their journeys.

Although the trip to a resort may seem daunting at first, Nelson says that beginners should not be scared to join in the fun.

“There are lessons in skiing and snowboarding at resorts during the trip available for newcomers to learn what they are doing,” Nelson said.

Spring break is March 2-10 this year, and those interested in spending time on the hills are encouraged to join the Alpine Ski and Snowboard Club for more information. To learn more about the club, contact Cameron Jenson via email at cjenson1@cord.edu.