By: Bobbie-Jo O'Neil
In: Music, Variety
With: 0 Comments 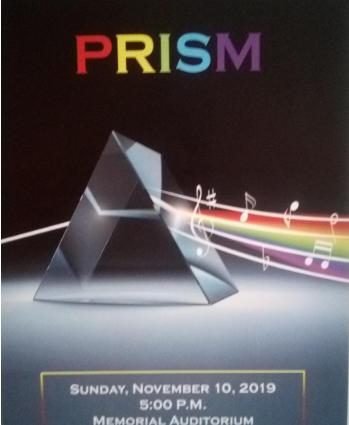 At the annual PRISM concert, the audience is surrounded by music–literally. Seated in the center of Memorial Auditorium, various instrumental ensembles will perform on multiple stages around the audience.

Concordia’s bands and ensembles will be performing in the  PRISM concert on Sunday, November 10, 2019, at 5 p.m. in Memorial Auditorium.

Dr. Peter Haberman has been organizing PRISM since he started at Concordia.

“PRISM is a unique concert experience where the audience is surrounded by 5 stages and the music is continuous. There is a wide variety of music and a large group finale piece where all the groups come together,” Haberman said.

When he was first in charge of PRISM, Haberman saw that PRISM was a lot of work and was unsure if they should keep doing the concert.

“After putting it together, I became PRISM’s number one fan. I haven’t changed it since the first time I put it together. The concert is such a highlight for students that I wouldn’t change it for the world,” he said.

“The piece we have chosen [for clarinet choir] is a little edgy and not a sweet little thing. It will capture the late 60’s and 70’s. The edge will be in the sound and rhythm. It will also be angsty,” Wakefield said.

Dickey will be conducting the finale, where the bands come together at the end of the concert.

“It’s going to be epic. The music will be familiar. Something people heard before. There will be theatrical elements in it. It starts out subtle then it builds. When the moment comes it’s dramatic,” he said.

Haberman will be conducting the Concordia Band and Symphonic Band. Echo Band will be student conducted by Jeremy Mattson.

“For each concert band I work with, I want them to be featured in a way that highlights what they’re good at and what makes them feel special. I want to find a piece that has a beautiful line and also is technical. I want to have something put more of a spotlight on the Symphonic Band to show how good they are, and less spotlight on the Concordia Band, since they receive a lot of spotlight, so they will not be doing something that is too flashy and difficult,” Haberman said.

Haberman, Dickey, and Wakefield each talked about what the most rewarding part of the process of preparing for PRISM is. Haberman focused on the show and the students.

“This a beautiful show for all the chamber and all the ensembles that really make Concordia great. The hard work from the students makes the whole program better,” he said.

Wakefield talked about the process of everything coming together.

“Anytime you’re preparing a piece it is like the theater. You’re putting a piece on dramatically. It’s also fun to contribute to something larger. What’s nice is it brings the smaller groups together and see more of depth to an instrumental program. It’s always great preparing for that,” Wakefield said.

“It’s going to be a wonderful show. Show up early and look for a seat in the middle so you’re surrounded by the music,” Haberman said.

“We encourage people to bring a pillow and blanket and find a good seat. Spread out and take it all in. You don’t want to miss this. You want to watch it live when you’re in the middle of the hall when everyone is playing,” Dickey said.