By: Bobbie-Jo O'Neil
In: Events, Music, Variety
With: 0 Comments 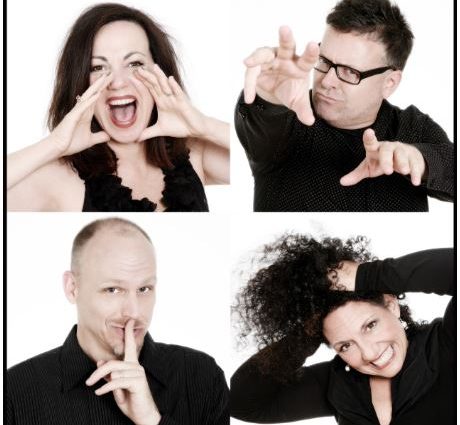 New York Voices is made up of members Kim Nazarian, Peter Eldridge, Lauren Kinhan, and Darmon Meader. The critically acclaimed vocal group was formed in the mid-1980s and has been performing for more than 30 years. The ensemble also runs its own jazz summer camps in New York. Wyatt Steinke, the Manager of Choral Events and director of Vocal Jazz 2, was the one to submit the proposal to have the New York Voices perform and be clinicians at the Vocal Jazz Festival.

“It was about this time last year I got an email from Roxane Case. I thought it would be good to get a really good jazz group. I’ve heard about the group for years. I saw them at the U of Mary and they were great clinicians there. I thought they would be good for the jazz festival,” he said.

Concordia’s Cultural Events Office is hosting this event and also played a significant role in bringing this festival together. Case, the Cultural Events Coordinator, worked through the logistics of the event, making arrangements, and ticket sales.

“There is such great value in our Concordia students, as well as the high school students to hear and learn from renowned artists in their field. I think there is great value in that. Sometimes the masterclasses are the most valuable because of that personal interaction,” Case said of the event.

Senior and Vocal Jazz 1 student director Jack Johnston has also been involved in planning and organizing the event. Vocal Jazz 1 will be opening for the New York Voices at the Friday concert.

“I’ve been reaching out to high schools and asking them if they would like to be a part of this year’s festival. I will be helping run the festival on the day of as well as performing and directing in it,” Johnston said.

The concert on Friday night is free to students and the festival on Saturday is open to the public. The festival is going to feature a new state-of-the-art sound system that is controlled by an iPad.

“I think that going to the concert on Friday night will be one of the best music experiences that they’re going to get. This is just world-class music and musicians of that caliber are good to watch,” Stienke said.

The New York Voices performance on Friday, February 7 at 7:30 PM in Memorial Auditorium. The Vocal Jazz Festival will begin at 9 AM on Saturday, February 8 in Christiansen Recital Hall in Hvidsten Hall of Music.