By: Bethanie Whitmore
In: General
With: 0 Comments 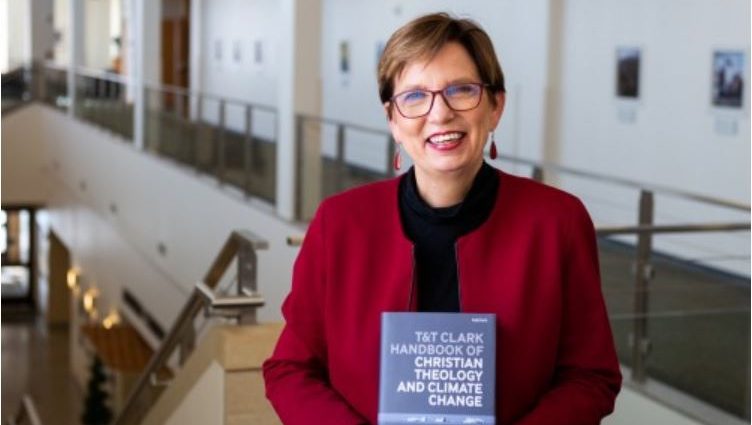 The dialogue of climate change and theology is discussed in Dr. Hilda Koster’s recently published book, “T&T Clark Handbook of Christian Theology and Climate Change,” co-edited by Dr. Ernst Conradie. After nearly three years of work, the book was published in December 2019.

Koster, associate professor of religion at Concordia, worked alongside Conradie, professor of theology at  the University of Western Cape Town in Cape Town, South Africa.

With the works of over 80 respected scientists, theologians and ethicists included, the book is set up as a dialogue between the North Atlantic theology and the theologies of the Global South. Perspectives of individuals from the majority of Christian denominations are incorporated. Written to be a resource for seminary students, graduate students, undergraduate students and pastors, the significance of the little-known connection between Christianity and the environment is emphasized.

“Faith traditions have an astonishing ability to touch people’s minds and hearts,” Koster said. “They not only teach us to love God’s good earth, our neighbor as ourselves and to advocate for the poor and the needy, but they also invite us to change our way of being in the world.”

Though she is hopeful that Christianity can play a positive role in the preservation of nature, Koster’s expertise and extensive research on the matter have revealed that, so far, the impact of Christianity on the environment has been more negative than positive.

As deliberated on in the book, the Christian faith has often acted as a hindrance in caring for the non-human world over the years. Christian teachings tend to encourage utilitarian attitudes towards nature, viewing it as a resource meant to be used, manipulated and controlled by humans.

Joseph Whittaker, associate professor of biology at Concordia, said that linking religion to the environment might be imperative in altering mentalities and behaviors towards the environment.

“If we tried to behave in a Christian way towards the environment, we’d make very different decisions,” Whittaker said.

Leila Zakhirova, an assistant professor of political science at Concordia, said that she is looking forward to reading the book and is considering using it when teaching future courses.

“Koster’s new edited book on the Christian-environmental connection is both timely and intriguing,” Zakhirova said.

So far, Koster and Conradie have received an overwhelmingly positive response to the handbook. Scholars in the field of theology have commended its extensive approach and the careful consideration it gives to important matters such as issues of race, class, gender, interfaith engagement and animal rights.

Even though it’s her newest, “T&T Clark Handbook of Christian Theology and Climate Change” is not Koster’s only co-edited book.

In 2015, “The Gift of Theology: The Contributions of Kathryn Tanner” was published. This book, co-edited by Koster alongside Rosemary Carbine, associate professor of religious studies at Whittier College, includes essays by various prominent scholars and honors the contributions made to the field of theology by Kathryn Tanner, a renowned contemporary North American theologian.

Even more, Koster’s second co-edited book, “Planetary Solidarity: Global Women’s Voices on Christian Doctrine and Climate Justice” was released in the fall of 2017. This publication was inspired when the “Laudato Si’,” Pope Francis’ encyclical letter, became public in 2015. In the letter, the pope addressed the issue of climate change, urging individuals to take action to put a stop to the damage being done to the environment by humans. After reading it, Koster thought that the pope’s letter, though important, was missing the voices of women across the globe. To remedy this, Koster worked with Grace Ji-Sun Kim, theologian and professor, to create a book that focused on and acknowledged the difficulties that women experience as a result of climate change.

Even with three co-edited, published books under her belt, Koster feels her work is not yet done. Already, she is planning an edited volume titled “Women, Ecology and Solidarity across Theory and Practice” which will consist of essays written by leading scholars of religion and ecology. This publication examines the matter of the extraction of natural resources and the impact pollutants and toxins have on the lives of women and will be presented at a conference at Oxford University in the United Kingdom this summer.

Though finishing “T&T Clark Handbook of Christian Theology and Climate Change” comes with a sense of satisfaction for Koster, she doesn’t consider it complete success.

“Success is moving together towards a renewable energy economy that is just and compassionate,” Koster said.

2020-02-13
Previous Post: Sundance Film Festival gives students a look into the world of independent film
Next Post: Gaming Law: What’s in a main?