By: Andrea Hughes
In: Theatre, Variety
With: 0 Comments 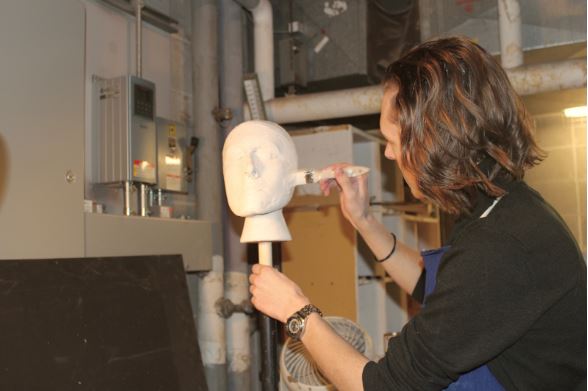 David Wintersteen is taking a leap and genderbending  roles while directing the upcoming production of Macbeth. Turning heads and creating a buzz, the cast of Macbeth is here to impress. The play runs Thursday, Feb. 20 through Sunday Feb. 23, on the Frances Frazier Comstock Theatre mainstage. Thursday, Friday, and Saturday showings are at 8 p.m., and the Sunday matinee showing is at 2 p.m.

“If you don’t know the story of Macbeth you might be living under a rock,” said Ian Sheele, prop director.

Macbeth premiered in 1606, making the play over 400 years old. Macbeth was first performed privately for James I and his brother-in-law, King Christian IV of Denmark. The first public performance of Macbeth took place at Hampton Court Palace in the Great Hall.

Josephine Nunez is playing the leading role of Macbeth. Nunez is a theater major, so she is always looking out for upcoming audition times and deadlines for shows. Nunez was not originally going to audition for Macbeth because she had a prior commitment that created conflict, but Wintersteen pulled her aside and said they could make both work. Nunez then auditioned for the role of Macbeth and was shocked when she got it.

“This is my first big speaking role, with lots of lines and memorization.” Nunez said.

In this production, all of the male characters are being played by women, and all of the female characters are being played by men. The cast was up for the challenge of the genderbend, channeling their inner manly men and terrifying witchy energies. The decision made by Wintersteen to genderbend characters is a shift and challenges the actors to work in ways they may not have the opportunity to later in their careers.

Nunez also talked about the genderbending of the roles. “I had to learn manly mannerisms. I had to learn how a man would sit. I would ask myself, ‘How would a man do this?’” she said.

Andrew Bates, playing Witch Number One and the Doctor, spoke on the topic as well.

For a look behind the curtain, Ian Scheele, also known as ‘Prop Master’ to many of his classmates, is an important part of the preparation for Macbeth.

According to Scheele, his job is to “comb through the script and see what it is I need to make.” He describes his work as “all holdable things,” and it can take a range of twenty minutes to twenty hours for him to finish one prop. His favorite props for Macbeth have been the witches’ crowns.

“The witches are something the public should anticipate the most about the play,” said Nunez.

Bates said the most difficult thing about playing one of the witches is the physical demands of the role–he crawls around on all fours throughout the play, which has resulted in a bruised knee or two.

Bates is most excited for the energy of the audience, both on opening night and throughout the rest of the performances. Actors feed off the audience and their energy, resulting in amazing experiences from both ends.

Scheele encourages everyone to attend.