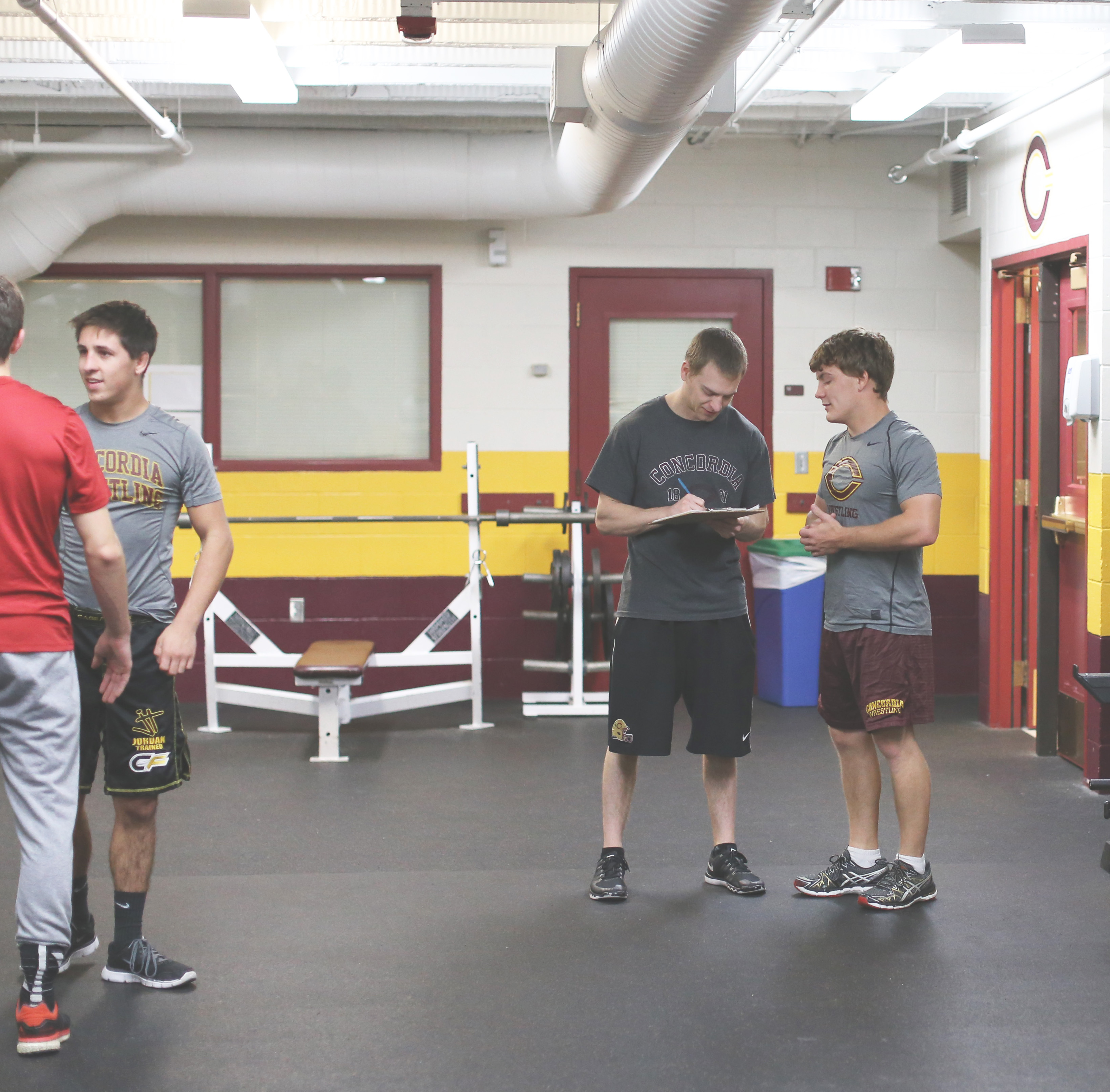 Tucked in a small room in the basement of Memorial Auditorium lies the place where obligations are forgotten. Where clanks of metal against metal ring over the blaring rap music. Where flushed faces and sweaty limbs appear in the mirrors. Where nothing but numbers run through one’s mind. The weight room is not just a place where people go to get “big” but to sharpen one’s senses after a long day of sitting in class, fretting over projects. The weight room is a place of rejuvenation, a place where each lift melts away stress and replaces it with strength to overpower it.

Since last spring, the hours of the weight room have been cut more than half due to a new rule by the NCAA and budget cuts in the athletic department. Non-athletes and athletes have felt the effects ever since.

First, the NCAA passed a regulation that allows Division III colleges to grant student-athletes time for them solely to utilize the weight room before, during and after their season. According to the 2016 NCAA Convention Division III Notice, the purpose of this regulation delves into the fact that “the weeks outside of the competitive season are the time to increase cardiovascular endurance, build strength and explosiveness, train for purposes of injury prevention, and become a better athlete so that students are prepared for the sport season.”

Brandon Toothaker, strength and conditioning coach, took up the new regulation and established the new hours, allowing athletes time before and after class to work out. “We try to get the whole team here [the gym] to work out together,” Toothaker said. “That’s why the hours are the way they are. Students can either get here before class or after class.”

In the past, most of the team workouts either happened before community time and then in the afternoon, ending before the evening began. He used his past experience and observations to set these times.

“Everyone wants to lift at four in the afternoon,” Toothaker said. When senior Bryce Fiebiger came to Concordia, he decided not to pursue athletics so he could focus on his premedical track and workout on his own time. As a bodybuilder, he works out five days a week and needs to use the weight room.

“You have your classes in the morning, go workout to reset your mind, and then you do your homework in the evening,” Fiebiger. “I never had any issues with working out with the athletes. As long as you stay out of their way, let them do their thing, and it’ll be fine.”

Fiebiger was not happy when he heard about the news. These hours do not work for him because he has class until 2:30, then is the student manager for tutoring, which takes place at night.

“You shouldn’t have to schedule your academics around when you want to workout,” Fiebiger. “It should be something you do for yourself that relieves stress, not causes stress since you can’t get in there.”

At the beginning, Fiebiger connected with Toothaker and agreed that he could lift for about a half an hour during athlete hours. It worked out for a bit, but then he resorted
to a membership at Metroflex, a 24-hour gym on Main Avenue, to be able to continue lifting when it works in his schedule.

Even athletes are struggling with the hours. Senior Emma Peterson, track athlete, has started fall track where track athletes can begin their off-season training.

“We have the worst weight room in the MIAC,” Peterson said. “We don’t have that much equipment, there’s no ab room so you have to go upstairs on the balcony to do it. With a [crappy] weight room, accommodate with hours.”

“For the weight room, I do not have a budget. It’s zero dollars,” Toothaker said. “If I want to get something, I have to talk to the athletics director to see if we have enough in our budget to pay for it. Most of the time it’s no.”

Toothaker’s first priority is the athletes and ensuring that they become better athletes while keeping them safe. When he is working with the athletes during their time, there is not a student worker in the weight room with him. His focus is on the athletes, and if non-athletes are inside while a team is working out, it becomes a safety risk.

Toothaker said the maximum amount of people he likes in the weight room is 30. He will allow up to 40 people if it is a team and everyone knows what they are doing. In the weight room, there are 10 racks, and Toothaker prefers no more than three people to a rack.

If a non-athlete student wants to workout during athlete hours, there are alternatives. Everything in the weight room can be found either on the balcony or on the floor of the track. Dumbbells go up to 90 pounds with the adjustable weights on the balcony. Bars and two squat stands are on the south wall. The only thing that is unique to the weight room is the

Peterson finds the options on the floor dissatisfying.

“I don’t want to be doing squats in front of three boys’ basketball teams or wrestlers,” Peterson said. “It’s annoying.”

Toothaker suggests asking a coach, a desk worker or him to bring down the nets to remove distractions from others while lifting on the floor. Peterson still found more issues.

“It’s dangerous, lifting in Olson [on the floor],” Peterson added. “Those things [squat racks] are really janky. When you’re trying to put the bar back onto it, it shakes.”

Even with separating athletes from non-athletes, safety cannot be fully met. The low ceiling with air ducts attached to the ceiling in the weight room has been knocked down at least three times, according to Toothaker.

“The tall basketball guys cannot do overhead stuff standing up because they hit the lights and everything,” Toothaker said.

Before the school year begins, Toothaker sits down with the coaches to see what each of them wants for the year and what they can do to accommodate that. In-season sports get first priority, and they go from there. Currently in the mornings, Toothaker will work with football
in the weight room and one of the assistants works with basketball on the courts.

Toothaker is the only full-time strength and conditioning coach.

In the fall, Toothaker works with football and volleyball. In the winter, he has wrestling and women’s hockey. In the spring, he works with baseball and softball. This year, Toothaker has two part-time assistants, Andy Stone and Martin Pepper. Stone works with the tennis, basketball and soccer teams. Pepper works with cross-country and track and field. Darin Ulness, chemistry professor and ex body builder, works with the men’s hockey team in the fall. Toothaker has been at Concordia since 2012, and he has worked with a different part-time assistant every year.

“The issue is that there are 545 athletes, and we are limited on space and staff,” Toothaker said.

To work with the large amount of athletes and the little space, Toothaker combines teams during their off-seasons for their workouts. For example, women’s soccer and volleyball worked out together last spring.

“It’s not the best thing, but it’s better than nothing,” Toothaker said.

Football is the biggest team he works with. Over 130 players are on the team, so he runs workout sessions at 6 a.m., 8 a.m. and 2:45 p.m. for the players. He works with the football team all year.

According to Toothaker, athletes are allowed to come into non-athletes’ time in the weight room if it is on their own time. Teams cannot workout during open-recreation hours.

“I cannot regulate that [when athletes workout],” Toothaker said. “I prefer them to come with the team when they’re supposed to, but that’s up to them.”

Due to off-season coach confidentiality, Toothaker could not share the attendance records of
the off-season training, but he said that it has been the best he has seen since he has started here.

Being a non-athlete himself in college, Toothaker understands how limiting these hours are on people’s schedules. If an individual goes to Toothaker and explains their situation, he will check the schedule to see if there is some space during the time the student wants to go in and go over safety procedures. For example, no one is allowed to workout in the weight room while a women’s team is working out.

In a perfect world, Toothaker would love to have a separate facility for athletes to lift and allow non-athletes to lift in the current weight room. He would also like more space to do speed and agility since the indoor track cannot hold track and field, baseball, softball, football and more in the winter during people’s on- and off-season training.

“I told my athletes that after they graduate and they make it big, to donate back,” Toothaker said.
“I said that we can put a statue of themselves in front of the facility. I’m hoping in the future that happens, but I don’t see that happening soon.”