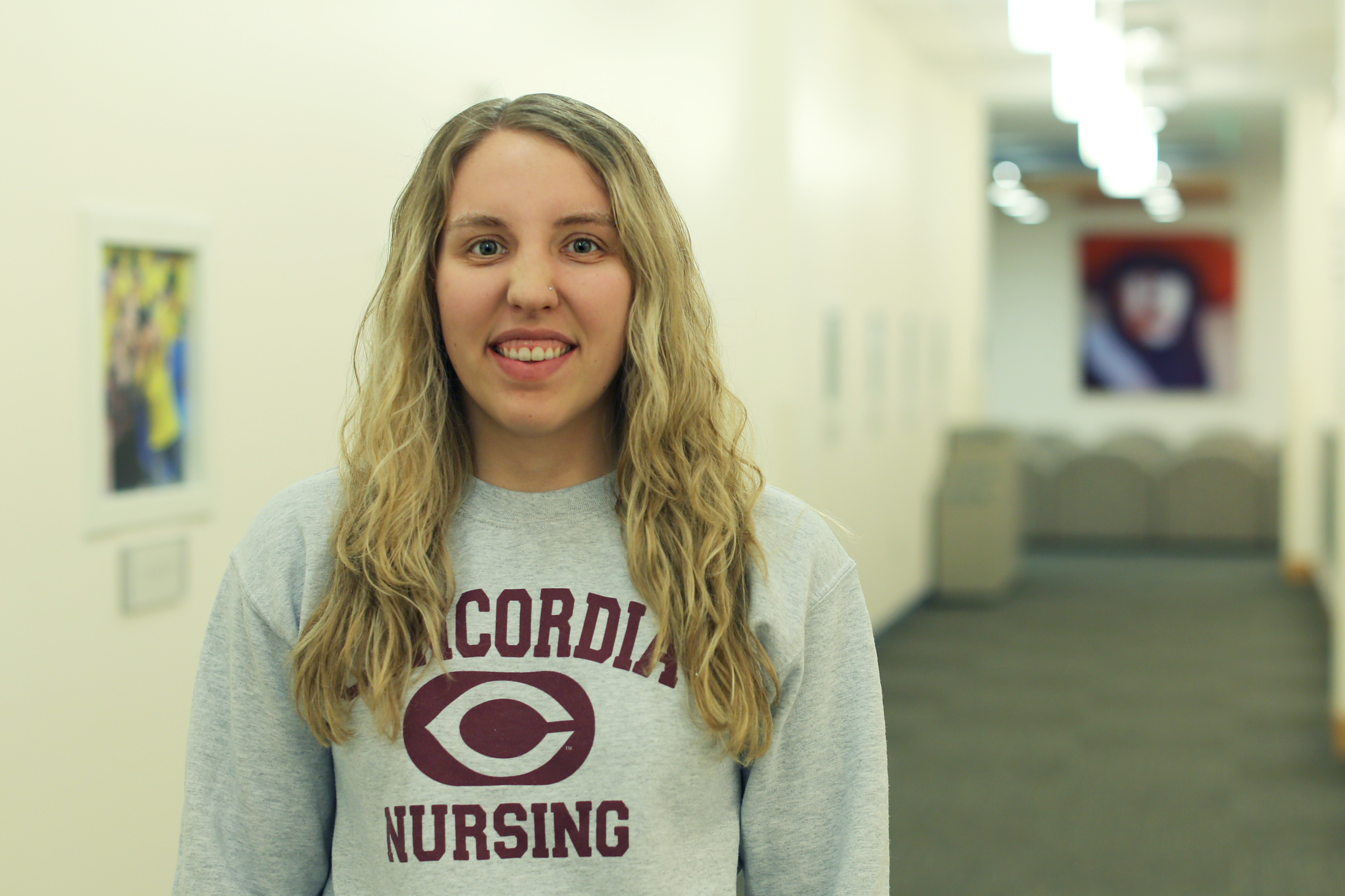 Concordia’s nursing program is challenging and rewarding, and holds high expectations of the students involved. There are currently 42 students in the program. Of these, only one is chosen to receive the most prestigious award a nursing student can achieve, Nursing Student of the Year (SNOY).

Elizabeth Viergutz, also known as Alaska by her peers in the nurs- ing program, was the recipient of the 2017 SNOY award. Viergutz is originally from Anchorage, Alaska, thus her nickname. She is a double major in nursing and Spanish with a minor in psychology. She credits her interest in nursing to growing up in Alaska and seeing the lack of healthcare that is provided in the local villages. After experimenting with elementary education her freshman year, Viergutz found nursing to be her passion after becoming a registered CNA.

“I want to leave my footprint,” Viergutz said. “I really want to feel like I’m really helping people and I think for me, nursing is my passion. It’s the passion of my heart, mind and soul.”

Dr. Jennifer Dejong is an associate professor and one of the faculty members responsible for choosing the winner of the SNOY award. As a professor, she has firsthand experience and observations on what qualities make for the SNOY winner.

“Elizabeth stood out because she radiates joy and an enthusiasm for the profession of nursing,” Dejong said in an email interview. “She is a student who not only does the work, and does it well both didactically and clinically, but she is also a student who possesses a spirit of caring toward all – those she studies with, those she learns under, and those she cares for at the hospital.”

It’s not just the professors who can see why Viergutz achieved the award. Her peers also find Viergutz more than deserving of the honor. Sadie Ness, junior nursing student, shares most of her classes with Viergutz and has witnessed the character and enthusiasm that that makes Viergutz a worthy recipient.

“Alaska is a very pleasant classmate and always brightens everyone’s day,” Ness said. “She is outgoing and confident [and someone] I turn to when I need help or have a question. She is already and is going to be an incredible nurse. I would trust her to care for any family member of mine.”

The process of picking the SNOY winner begins with a nomination from either a faculty member or the Student Nursing Association (SNA). Six students are nominated and they must be juniors. They are chosen by a plethora of categories including study habits, professionalism and dedication to the major. After the top six are selected, the top three are then chosen by an anonymous vote from faculty members. After that, the nominees must interview with two separate faculty members and the student is chosen.

As winner of the SNOY award this year, Viergutz has been handed the responsibility of overseeing Concordia’s Expand Your Horizons event. This event aims at exposing girls in grades seven through nine to math and science programs, such as nursing. The goal is to allow young women to get involved in male-dominated fields. This has become an integral responsibility for the winner of the award, so much that the committee choosing the winner considers which candidate will be the best guide for these middle-school girls.

“I am so excited to pass onto the next generation of young females that they have the ability and are well-equipped to go into careers that use math and science,” Viergutz said. “I hope to inspire some young female to choose nursing as a career path just as someone once did for me.”

2017-02-23
Previous Post: Students must be open to different opinions
Next Post: Women’s tennis team strives to improve despite small size