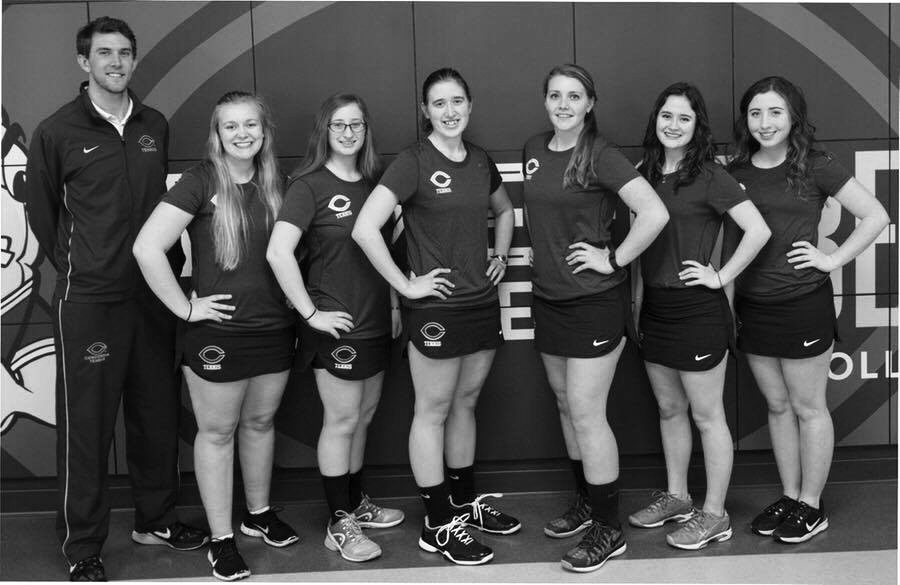 It is a year of rebuilding and a clean slate for many sports teams. For the Concordia women’s tennis team, that is a big aspect of spring season: rebuild.

The tennis team has graduated two seniors last season and are working with a fairly young groups, which means that they are focusing on different aspects of their game than years before, according to head coach Joseph Murrey.

“What I am doing is actually working on some fundamentals,” Murrey said. “Our girls team is in a year of rebuilding and it’s an opportunity to work on some of those things.”

The team is composed of six women, which is the bare minimum a team needs to be able to compete and not forfeit matches. Of those six women, two are freshmen, one is a sophomore who didn’t go out for the team last year, two are returning sophomores, and a junior. And according to Murrey, with a team so early in their collegiate careers, the little things are important.

“Basically, we spent the first three weeks adjusting to the speed,” Murrey said. “Right now we are working more on, now that they have adjusted to the college play level, the strokes and helping them develop some good habits on how they hit their strokes.”

Returning sophomore Lisa Neumann agrees that there are some little things that are in need of some work.

“After playing some matches as a team, we need to work on movement,” Neumann said. “This means better footwork, getting prepared between shots. In doubles, knowing when to go after a ball and when to let our partner get it and moving together as a team to cover the court.”

Murrey explained that the individual matches play could be great, but playing doubles is where teams get a majority of their points, and is an aspect that the team is improving on.

“[Playing doubles] is not a big focus in high school,” Murrey said. “You just put people there. You don’t really teach them how to play doubles. So that’s a big thing … how to compete there.”

While these little things are being worked on, it’s the things out of the team’s control that throw a wrench into their play. With the bare minimum of six women, sickness and injuries are factors the team cannot afford. The team learned this first hand when one of their players had vertigo and missed a week and two sets.

But like every team, no matter the sport, there are always hiccups in the road and improvements to be made, but despite all those, the women’s tennis team still has heart and determination. Junior Kendra Stoick believes the young team is making important improvements.

“Last year, and the past few years, we’ve struggled a little bit getting wins and just being able to compete with the girls,” Stoick said. “This year we brought in two freshman and a new sophomore and they are really dedicated and working hard. You can definitely see it within the scores.”

Murrey agrees. The will that his team has to fight is exactly what they need during this year of rebuilding, and that was evident in their last double header.

As the only upperclassmen, Stoick has looked at the situation at hand and at her team, and is proud of the competitive nature they are showing.

“Even through illnesses, they are still able to come to practices and [are] still working hard and doing the best they can no matter what,” Stoick said.

For Murrey, this season will go down in the books no matter the outcome.

“I think this year, the best word to sum it up would be adversity,” Murrey said. “I told them early in the season, a few years from now when we have 10 to 12 girls and I’m going to be able to say, look, it started with six girls who gave everything they got. Got up early, went through the work, played doubleheaders back-to-back matches in a day. Are worn out. Go through sickness. Walk through all that adversity but kept the program alive so that you could be here.”

For Neumann, the season is a chance not only to rebuild, but to play, just because they can.

“We almost got cut last year so even having this season is a blessing,” Neumann said. “As a team and as individuals, we want to have success. By success, this doesn’t mean winning. We love to play tennis, that’s why we go out and play as hard as we can every match. Everyone wants to win, but sometimes you need to feel success in other ways. For us returners, success was having a team this year.”