Three pairs of sisters bond over running track together

Athletes frequently refer to their teammates as family. For six members of the Concordia College Women’s Track and Field team, a teammate may actually be a family member.

This season there are three pairs of siblings on the team, Mikayla and Miriah Forness, Marissa and Kara Andersen, and Colleen and Elizabeth Vought. Each pair has a unique dynamic.

The Forness sisters are the furthest apart age wise. Mikayla is a senior while Miriah is a freshman, meaning that this will be their first and only year together as college teammates.

Although only one of the Forness sisters was able to compete this indoor season, as Miriah was busy with her first season of basketball at Concordia, the family was well represented as Mikayla took third in the pentathlon at the MIAC Indoor Championships on February 23.

Even though there is a three year gap between the sisters, they have quite a bit of experience competing alongside one another.

Their family moved from the Fargo area to Bismarck during Mikayla’s sophomore year. Their new school, Bismarck Shiloh Christian High School, was small enough that Miriah was able to practice on the high school basketball team alongside her sister as early as eighth grade. 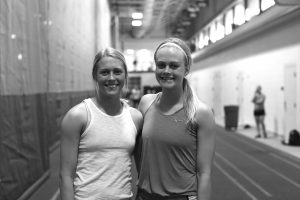 In high school, they pushed each other in practice. Even after Mikayla left for Concordia, the two competed with each other.

“When I would go home, she was always someone I’d kind of workout with,” Mikayla said. “Even when we’d go on runs, we can’t go on a nice relaxing run because towards the end we always both speed up.”

The Foreness sisters have strong ties to the FM area. In fact, both of their parents were Cobbers. For Miriah, who moved to Casselton for her senior year of high school, her ties were a big part in her decision to attend Concordia.

“We grew up in the area so I knew it pretty well,” Miriah said. “My dad’s side of the family is all in Fargo, so that kind of helped too and then with us moving back to Casselton, it was relatively close if I wanted to watch my little sister play basketball.”

Although Mikayla wanted to let her sister make her own decision in choosing a college, she did let her know it’d be nice to go to school with her again.

“It’d be cool if you came,” Mikayla remembered saying to her sister. “It’d be nice to have another year of sports together.”

As Miriah transitions from basketball to track, she’s looking to her sister for help with new events. “She’s kind of teaching me the ropes of everything,” Miriah said. “I’m trying to do the hep[tathlon] and I haven’t ever done a few of the events like shot or javelin. I had to learn how to hurdle and high jump.” In the offseason, the Forness sisters workout together and also ride horses, something Mikayla believes makes them even closer.

“During the summer we ride pretty much everyday,” Mikayla said.

There is no age gap for the Vought sisters. That’s because they’re twins. The Voughts, now sophomores at Concordia, attended Oak Grove High School after their sophomore year of high school and ran track together both years at the school. Before that, they attended a school in South Korea for three years where they ran track and cross country. Before going to Korea and then Oak Grove, the Vought sisters lived near Willmar, Minn. Despite their extensive travel and the fact that both of their parents went to NDSU, the twins chose Concordia. This was in large part due to their experiences at Oak Grove.

“A lot of our teachers at Oak Grove are Concordia alum,” Colleen said. “Probably over half.”

While in Korea, the sister traveled through much of Asia and Europe. This also played a role in wanting to stay local for school. 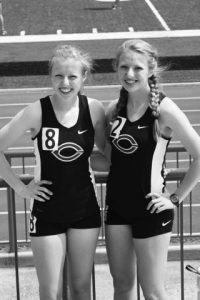 “When you live so far away, you just just want to stay here for awhile. You don’t want to get up and move again,” Colleen said.

At Concordia, both of the Voughts run on the cross country team as well as the track team. As freshmen, they were running cross country for the first time since their sophomore years of high school. In fact, Elizabeth only ran three races in high school before suffering an injury. Though they said it was hard getting back into the sport at first because of its extra long distances, it has helped them with their distance time in track.

Both primarily run the 800 meter dash. Competing against one another in college has only fueled the lifelong competitive spirit that the Voughts have with one another. They run similar times in each of their events so they’re able to pace each other and push each other. Sometimes they push too far.

“We haven’t always gotten along during practices,” Elizabeth said. “We used to be throwing partners for softball and I don’t think it ever ended well.”

They both laughed at this.

The Andersen sisters are two years apart in age. Marissa is a junior and Kara is a freshman.

Their events are very different. Marissa competes in the pentathlon while Kara runs the long distance races. Their majors are also different; Marissa studies biology while Kara studies mathematical finance. Despite their differences, they’re still close.

Like the Forness sisters, the Andersens also have family lineage at Concordia. Their mother is a former Cobber. Although neither originally wanted to follow in their mom’s footsteps, their mind changed once they visited Concordia.

“I was dead set against coming here,” Marissa said. “Then I came to tour and Kara came with us … we toured and we’re fighting at the end of the tour about who would get to go here.”

Because their events are so different, they rarely practice with one another.

“The only time we ever see each other is in the locker room or when she gets back from her runs,” Marissa said. “Then we just make weird faces at each other and that’s about all the interaction there is.”

However, they both agree that having a sibling for support is huge. “It’s nice to go and vent to someone who’s not your friend and is going to love you no matter what,” Kara said. “Rather than people you’ve known for only four months.”