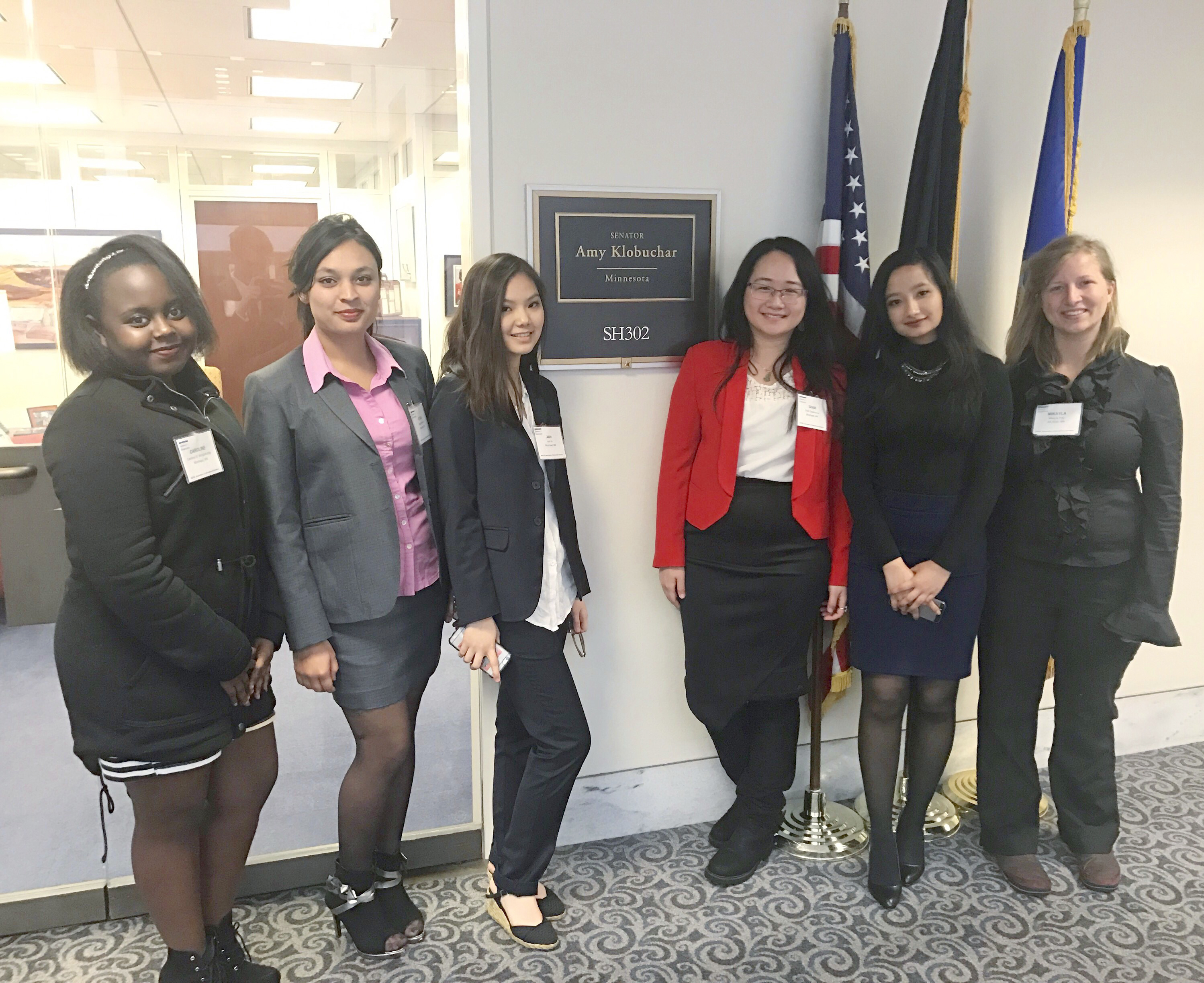 On March 13 and 14, Concordia students, both international and Minnesota natives, voluntarily visited Washington D.C. for National Advocacy Day to talk to their legislators about issues concerning the international community.

National Advocacy Day is an event organized by the Association of International Educators that grants college students across the country the opportunity to meet with Congress members and discuss pressing issues. Concordia’s student and staff representatives chose to bring up these three topics to their legislators: the BRIDGE Act, Senator Paul Simon’s Study Abroad Act, and “Championing the Value of International Students and Scholars.”

The BRIDGE Act — the Bar Removal of Individuals Who Dream of Growing Our Economy — addresses the concern that children of immigrant parents, who were brought to the U.S. as minors without status, are not protected under President Trump’s newest immigration ban. Relief already exists for these young people in the form of Deferred Action for Childhood Arrivals, (a policy created in 2012 to protect minors from deportation), but this relief is only valid for two years at a time so every two years these minors must reapply for it. The process of registering for the relief often puts these minors’ families in danger of deportation. According to a NAFSA debriefing document, the BRIDGE Act is designed to “ensure these young people are protected from deportation” while Congress is finding “a permanent fix for the broken immigration system.” This protection would last much longer than two years, giving these young people enough time to become permanent citizens without being deported in the process.

The Senator Paul Simon Study Abroad Program, according to another NAFSA document, works to “significantly increase the number and diversity of American students studying abroad, especially to non-traditional locations.” The proposal for this program cites data showing that students who study abroad are more likely to complete their degree and even have a higher GPA than students who don’t, but “less than 10% of college students are able to study abroad before they graduate.” Studying abroad is highly valued at Concordia by staff and students alike, but not every college grants the opportunities to study abroad that Concordia does. This program would work to advance four goals: One million U.S. college students will study abroad in the next 10 years, the diversity of study abroad participants will reflect the U.S. undergraduate population, students will study abroad in more non-traditional locations (Asian, South American and African countries instead of European countries) and study abroad programs will become a critical component of higher education.

Upon arriving in Washington D.C. on March 13, five Concordia students and one staff member–Prashansha Maharjan, Mikayla Frey, Utsah Shrestha, Caroline Murigu, Anh Vu, and Shan “Susanna” Lu–joined the rush of scholars from across the nation in attending an afternoon full of briefings about the event and the issues at hand. Professionals were brought in to walk through each issue in detail, teach the students how to phrase each concern in the most effective way, and to answer any questions thoroughly. Prashansha Maharjan, a first-year English writing major and business minor from Nepal, described the briefing sessions as “quite detailed and highly effective.” “We had done some background research … on the senators, representatives and issues … but without the briefing we wouldn’t have been as prepared for our meetings as we were,” Maharjan said.

The following day, the international guests attended lunch on Capitol Hill and met with Congressional staff. Concordia’s students got the opportunity to meet with staff members from Representatives Tom Emmer and Colin C. Peterson’s offices, as well as Senator Al Franken himself. Although they didn’t promise any new solutions to the problems, each legislator and staff member was receptive and listened graciously to the students’ concerns. “They are eager to learn about the issues we are advocating for,” said Susanna Lu, assistant director of the international community at Concordia. “We plan to stay in touch with them and urge them to continue working on the issues with us in the future.”

Concordia’s National Advocacy Day representatives all agreed that the experience was a success.

Utsah Shrestha, a senior computer science and business major from Nepal, said, “[It] was a great experience…to be able to represent Concordia and be a voice for all the international students.”

Mikayla Frey, a senior Global Studies major and Minnesota native, noted that “regardless of [whether] the legislation goes through…we learned so many skills.” She also said she now “know[s] how to advocate for issues that [she] cares about, as do the others.”

Lu described her hopes to continue this conversation between international scholars and American legislators as a yearly tradition. “It’s not often they get to take part in an advocacy event like this,” Lu said. “It will be great…to give international students a chance and a platform to express their view on a national scale [in the future].”

2017-03-23
Previous Post: To cut out chemicals, make your own perfumes
Next Post: Concordia is an echo chamber for liberal voices