By: Eli Swanson
In: Featured, General, Sports
With: 0 Comments 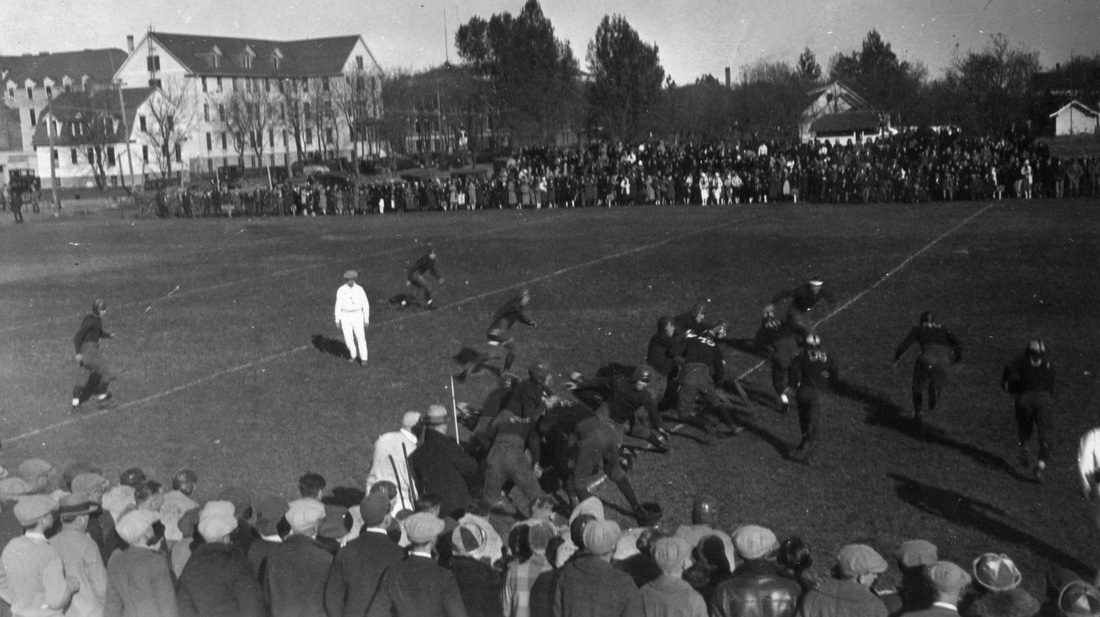 The 1981 Concordia football team did not lose. The Cobbers did not lose in the regular season, nor did they lose in the playoffs. Furthermore, when the Maroon and Gold hopped on a bus to make the long drive back from the NAIA Division II Championship Game in Austin, Texas, they remained undefeated.

After the game, Concordia coach Jim Christopherson said of his team, “they maintained their confidence, knowing a win could be salvaged.”

Maybe a win could have been salvaged, but on the day it wasn’t to be for the Cobbers.

With a 24-14 lead after the first three quarters, all Concordia had to do to win the game — and capture a third national championship, their second in four years — was shut down down the Austin College Kangaroos’ offense. That didn’t happen.

The Kangaroos rattled off a 77-yard scoring drive to open up the fourth quarter before taking the ball back and marching down the field with only a few minutes remaining in the game.

Concordia’s defense held firm on Austin’s final drive, stopping a short pass on third down to force a 57-yard field goal try for the Kangaroos. Few kickers — college or professional, past or present — can consistently hit from that distance, but Austin College’s Gene Branum hit the kick of his life to tie the game up with 1:12 left on the clock.

The 57-yarder is still the longest in Austin College history.

Concordia had a shot to win the game on its final drive, but after a long passing play was broken up by the Austin defense, the Cobbers elected to hand the ball off and settle for the tie.

After the game, Christopherson was impressed by the kick that eliminated his team’s lead.

“I couldn’t believe that kick,” Christopherson said. “We thought they might fake a field goal and go for a pass. The kick was kind of like a dream. But since the game ended in a tie, it is a compliment for two fine teams. It was a perfect ball game.”

The end result marked the third time that an NAIA football championship game ended without a clear winner. Concordia was also involved in the previous draw — a 7-7 stalemate against Sam Houston State in 1964. The initial tie was a 0-0 thriller between Montana State and Saint Joseph’s of Indiana in the NAIA’s inaugural season.

Concordia has not played for, nor won, a national championship since 1981, but in the program’s centennial season, it is important to note how far the Cobbers came in the five decades before their 1981 victory.

It is difficult to pinpoint the beginnings of athletic competition at Concordia. As longtime physical education professor and coach Finn Grinnaker noted in his thorough abstract of Concordia athletics, “Stand Up and Cheer: the Story of the First 100 Years of Men’s Sports at Concordia,” “athletic information reported in the Concordia publications prior to about 1908 was at best quite sketchy,” but there is a fairly defined timeline when it comes to Cobber football.

In the fall of 1916, six months prior to the United States’ entrance into World War I, a group of Concordia students — captained by future head coach Rudolph Lavik — gathered for the first official football practice in school history. Football was not nearly as ubiquitous at the time as it is today — as evidenced by the Crescent’s reporting on the event.

“Most of the boys had never felt of the pig skin before. This is an undisputed fact recorded even by the casual onlooker. Some of the prospective gents appeared for practice in dress suits. Others mistook the pass time for baseball. Hence all the Northern League uniforms visible on the gridiron, while again a few blossomed forth in homespun fancy embroidery.”

The first squad was organized by the founder of Concordia athletics, Alfred “Pop” Sattre. Sattre played an instrumental role in petitioning the faculty to allow the football program to schedule games against outside opponents starting in 1916. Four years later, Sattre would represent Concordia at the charter meeting of the Minnesota Intercollegiate Athletic Conference.

Concordia’s team, not yet known as the Cobbers, did not achieve much in its first two seasons on the gridiron — the two teams went a combined 0-5 while scoring only six total points — and did not field a team in 1918 or 1919 due to a lack of available players. After the end of the war, the football program started to take shape.

In 1920 the MIAC was formed after representatives from the Minnesota colleges in the Tri-State Conference sponsored a motion for rule changes that was overruled by the North Dakota members. Concordia — represented by the aforementioned Pop Sattre — was the only school in attendance at a meeting on Mar. 15, 1920, at Carleton College that did not adopt the conference’s constitution. The school would come to its senses after a final year in the Tri-State Conference and join the fledgling MIAC for the 1921-22 season.

The Cobbers were competitive in the 20s, but it wasn’t until the 1930s that the school won its first conference championship.

Frank Cleve, the fourth coach in Concordia football history, led the 1931 squad to a 7-2-1 overall record (4-1 MIAC) and the first conference championship in school history. The Cobbers’ lone MIAC loss was a 21-6 defeat at the hands of St. Olaf in the season finale. After the championship was secured, the team was greeted in a special chapel service. Grinnaker notes in his book the many dignitaries that congratulated the group for their outstanding accomplishment.

“President Brown acted as master of ceremonies and Moorhead Mayor C. L. Evenson extended the city’s best wishes. Helen Pederson spoke on behalf of the student body. A. L. Erickson of Dilworth represented the alumni in congratulating the team. Rev. S. G. Hauge of Hawley brought greetings as a member of the Board of Directors (Board of Regents.)”

The Cobbers won their second MIAC championship in 1934 with a 4-0 record in conference play. Concordia’s lone loss, a 6-0 defeat, was to the North Dakota Agricultural College (now known as North Dakota State University) in the season opener.

The late 30s were mostly forgettable for Cobber football, but the year 1941 marked the beginning of a defining era for Concordia. After going through four head coaches in 19 years, the 1941 season was the first of 28 for legendary coach Jake Christensen, who also served as basketball coach and athletic director. A St. Olaf graduate, Christiansen came to Concordia after serving a 12-year stint as head football and basketball coach at Valparaiso University in Indiana.

After finishing third in the MIAC in Christiansen’s first season, the Cobbers won their third conference championship in 1942. The 40s were a struggle for most college athletic programs due to the tremendous number of bodies contributing to the war effort, but Concordia managed to stay afloat despite not having a military unit stationed on campus. In the 1940s segment of his written history, Grinnaker summarizes the immense task that Christenson undertook in these years to build the school’s programs.

“[Christiansen’s] workload at Concordia during those years was almost unbelievable,” Grinnaker said. “He was chairman of the Physical Education Department, athletic director, football coach, basketball coach, planner and designer of the new athletic field complex and fieldhouse, recruiter, and in addition, was involved in a myriad of community activities including being a member of the school board.”

During Christiansen’s tenure Concordia would win 197 games, four MIAC championships and one national championship — all while experiencing only one losing season. Christiansen is one of only 11 college football coaches to coach in a stadium named after themselves.

Grinnaker, who arrived at Concordia as a student the same fall as Christiansen, said of the coach’s legacy, “wherever his players gather his presence is felt; there is a sense of togetherness, a sense of joy, gratitude and a deep appreciation for the opportunity that enabled them to play for this very special man.”

With the end of the Christiansen era came the beginning of an even longer portion of Concordia history: that of Jim Christopherson.

Christopherson graduated from Concordia in 1960 before moving on to play two seasons with the Minnesota Vikings in the NFL. He also spent a year playing for the Toronto Argonauts in the Canadian Football League.

Christopherson led the Cobbers for 32 seasons, the longest tenure of any Concordia football coach to date. In that span, the Maroon and Gold won 218 games, 11 MIAC championships, and two national championships. Christopherson was elected to the National Football Foundation’s College Football Hall of Fame in 2007 — the first Concordia representative to be enshrined.

Christophersen announced his retirement in the middle of the 2000 season, and that opened the door for the current head coach — Terry Horan — to step into the position at his alma mater.

Horan played under Christopherson from 1985-88, setting Concordia receiving records for receptions, receiving yards and touchdowns, and all but one of these record still stands today. After graduating, Horan played minor league football for a year before making a brief stop in the NFL when he tried out for the New York Giants.

Prior to assuming the head coaching role at Concordia, Horan was the head football coach at Breckenridge High School from 1993-1996 and 1999-2000. During Horan’s tenure, the Cowboys made three straight state tournament appearances from 1994 to 1996, including a state runner-up finish in 1995.

Since taking over in 2000, Horan’s teams are 111-53 with a conference championship in 2004 and two NCAA postseason appearances. In Concordia football’s 100th season, Horan takes pride in the program’s tradition and work ethic.

“This program means the world to me,” Horan said. “[The 100th season] is a pretty special thing to be a part of for our guys, but with pride and tradition we’ve set a high standard that hasn’t changed this year.”

Over its first 99 seasons, Concordia is 525-296-40 with 18 conference championships, three national championships and two all-important ties.