By: Katie Beedy
In: Featured, News
With: 0 Comments 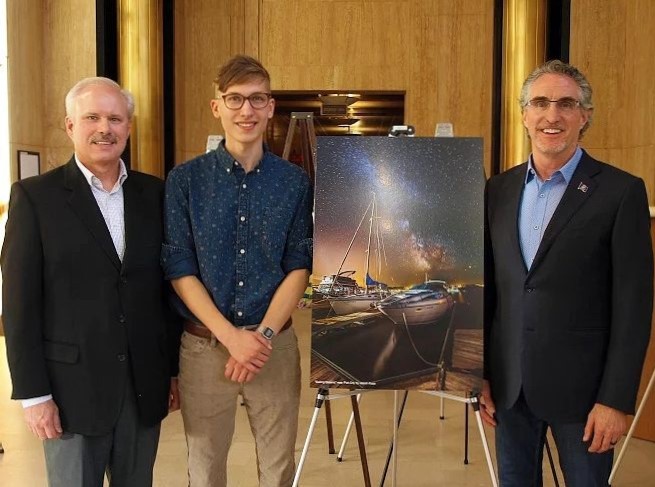 When sophomore graphic design major and self-taught photographer Josiah Kopp sets out to get the perfect shot, he looks to the sky.

“I always like finding new places I’ve never been before. I love taking pictures of night skies and the Milky Way, that’s sort of my forte,” he said.

One night last July, as he drove around rural North Dakota looking for new places to shoot, he came across a harbor on Lake Sakakawea, 50 miles north of Bismarck.

“There were all these boats lined up and it was the middle of the night, and it was just beautiful,” he said.

The resulting photograph, “Sailing Dreams,” won the Adventure and Recreation category and the Best of Show award at the 14th annual North Dakota Governor’s Photo Contest. Gov. Doug Burgum recognized the winning photographers in a ceremony in Memorial Hall of the North Dakota Capitol building on Oct. 16.

According to the official North Dakota state government website, it was the vibrancy of the night sky, as well as the subject matter, that earned “Sailing Dreams” its prizes.

“The photo grabs a viewer’s eye while showcasing the clarity of North Dakota’s starry skies and our exciting adventure opportunities,” the website said.

There were a total of 1,381 entries this year in the categories of Adventure and Recreation, Places to Visit, Communities and Events, Fun with Family and Friends, Scenery and Wildlife. The photos were judged by a panel of experts on their originality, subject matter, visual appeal and ability to portray North Dakota as a legendary travel destination.

Of the several photographs Kopp submitted for the contest this year, “Sailing Dreams” was not his favorite; however, he believes he was able to capture an often overlooked aspect of North Dakota.

“It was an interesting perspective on North Dakota that people don’t always think about,” he said. “Usually they think about prairies and the Badlands, but we definitely have like Lake Sakakawea, so this is a new perspective that I think they really liked.”

At just 20 years old, Kopp was the youngest winner at this year’s contest. His photography professor, Chris Mortenson, says his technical ability and dedication make him stand out among his peers, young and old.

“There are people who have probably been photographing for many many years that apply to that and probably never even get chosen to show, and much less win,” Mortenson said. “His technical ability is part of what shines. Often times, the people that apply to contests like that are not necessarily putting that much dedication and thought into their images. His technique is like, it’s perfect. It’s beautiful.”

Kopp picked up photography three years ago as a creative outlet to cope with depression and anxiety. He taught himself the basics (with the help of some YouTube tutorials), began his own photography business, Frozen Pines Photography, and has been working to hone his skills ever since.

Many nights, while other students would rather be sleeping or watching Netflix, Kopp picks up his Nikon D610 and heads outside, looking for his next subject. While his photographs tend to focus on landscapes and the night sky, Kopp also takes interest in abandoned buildings and farm equipment.

“In one little outing I will take anywhere from 30, 40, 50 photos, sometimes up to a hundred, and I will probably keep five of them because out of every ten photos I take, I probably keep one,” Kopp said. “I’m just kind of a perfectionist.”

Beyond enrolling in a photography class, Mortenson said, this kind of persistence is the best thing for other students hoping to pick up photography.

“It takes that dedication of consistently working and consistently wanting to make yourself better and in some sense never being satisfied with what you’re doing so you’re pushing yourself to get better,” he said.

Kopp and the other category winners each received a $200 cash prize and will have their photographs featured in North Dakota Tourism’s promotional materials. As the Best of Show winner, Kopp also received an additional $300 cash prize and a free, one-year basic membership to AAA, the largest travel organization in North America.

2017-11-02
Previous Post: Ross’s Reasons: Your betting guide for week 8 in the NFL
Next Post: Nadia Bolz-Weber speaking on campus for 500th anniversary of the Reformation