A tale of two ‘Tartuffes’: Concordia and NDSU to perform same play this month

By: Contributing Writer
In: Featured, Theatre, Variety
With: 0 Comments 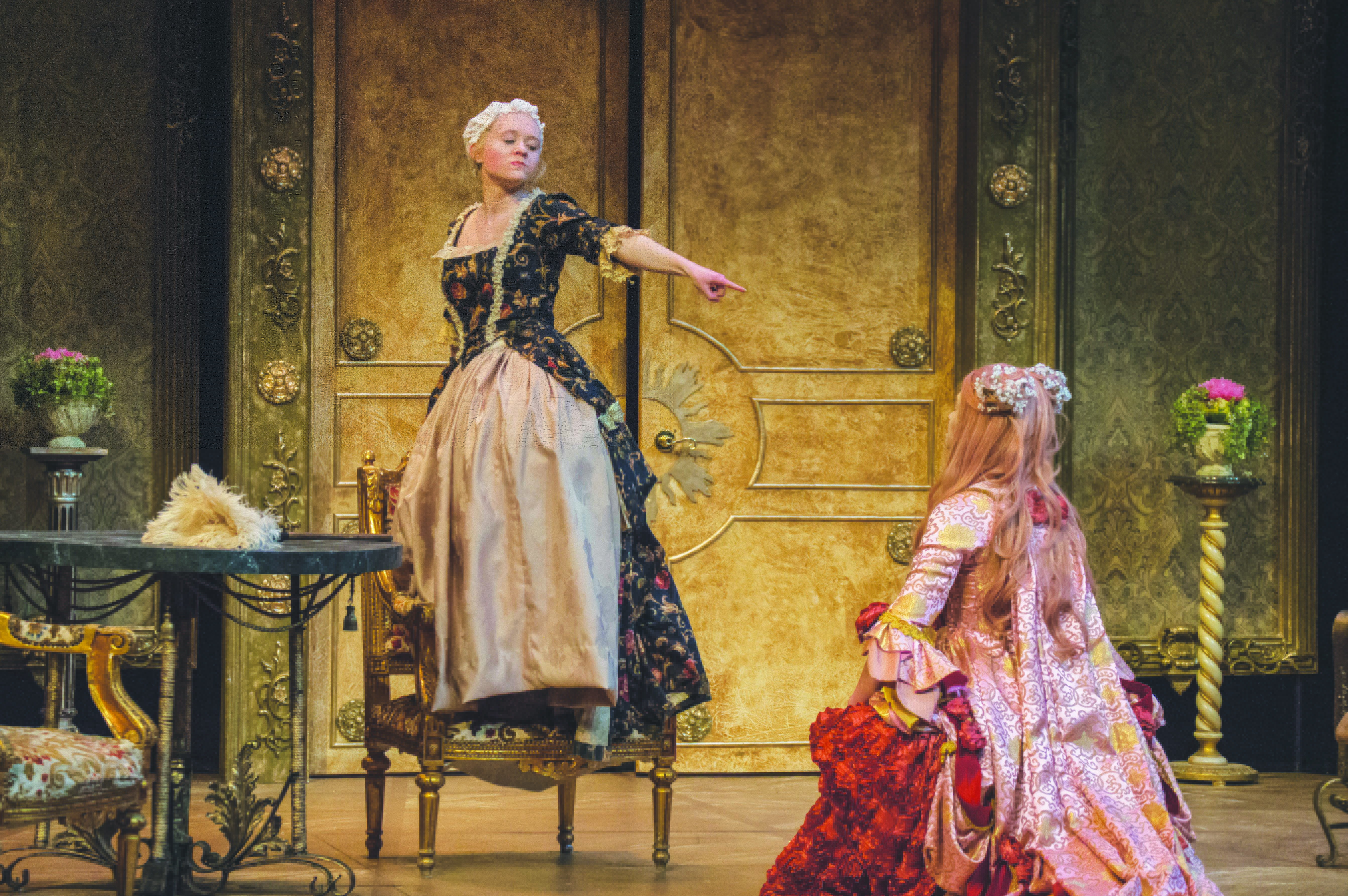 In the same political climate, during the same month, and at almost the same spot on the map, Concordia College and North Dakota State University have chosen the same centuries-old show to perform this February.

“Tartuffe,” first performed in 1664, is a classic French comedy with an overarching theme of religious hypocrisy. Dr. David Wintersteen, director of “Tartuffe” at Concordia, describes it as “a play about a con artist who is using religion in order to get the things he wants.”

The playwright, Moliere, wrote about a man named Tartuffe who uses false piety to get himself into Orgon’s household with plans to steal his fortune. Throughout the play, Orgon’s family tries to convince him that Tartuffe is not a truly religious man, but Orgon is blind to what is really happening.

While the directors of these two local productions chose the comedy around the same time, they did so for different reasons. NDSU’s Chelsea Pace was set on training a troupe in the style of commedia dell’arte, a masked art form. She said that “Tartuffe” was chosen because of its connections to current events around the world and the possibility to start conversations around themes such as hypocrisy.

Wintersteen says part of the Concordia theatre department’s decision to stage “Tartuffe” was made because Concordia has not done a period comedy in quite some time. “Tartuffe” was also chosen because of this year’s Reformation-themed Symposium, which inspired the department to perform shows with religious themes. “Tartuffe” is the third of these, following “Wittenburg” and “Fiddler on the Roof” in the fall.

Though both schools are doing the same show, they will appear very different on stage. NDSU’s production will be in the style of commedia dell’arte, an Italian Renaissance style which utilizes improvisation and stock characters.

“Moliere was really into commedia dell’arte and while he didn’t write this show in that style specifically, it blends itself quite well together,” Pace said.

Though the original play was set in Orgon’s house, NDSU’s production will be set in a turn-of-the century French circus. From the beginning, Pace had a vision for a “flashy, razzle-dazzle” concept.

“I wanted to highlight this idea of sleight of hand. Like, if I distract you enough over here, you won’t notice what we’re actually talking about. That’s something we’re playing with consistently throughout the play,” she said.

Pace has added five clowns to serve as a silent chorus and help lead the audience through the play. Most of the characters onstage will be wearing masks, to emphasize Tartuffe’s mask of piety. She also says her thematic focus is more on hypocrisy than religion.

“We’re just highlighting that side of the religious issue, but we’re not doing a play without religion. It’s a play that criticizes hypocrisy,” Pace said.

However, she makes it clear that her main goal is for the audience to laugh.

NDSU junior Maria Sunderman, who is playing the role of Dorine in “Tartuffe,” references the humor of the show as like “old-fashioned SNL.” She thinks anyone who likes to laugh will like this show. Pace adds that the show brings up serious issues such as lying and people not believing women.

“It’s right there in the script,” she said. “I didn’t add it, but we’re going to laugh really hard when we talk about it.”

Concordia’s production will stick closer to the original design, according to Wintersteen.

“I’m not trying to reinvent the wheel. I don’t think that’s what this script is calling for at this time,” he said.

He emphasized the value in doing a period comedy in the style of the period in which it was written; however, he also mentioned that the themes of the play are timely.

While there are themes about marriage, the place of women, and economic disparity, Wintersteen says that they are not central to the play. He says that the play is a comedy, so the focus is less about one big idea and more about being funny.

Though Concordia’s production is sticking closer to the original version, a unique element is the experience the actors are getting. Concordia junior Kayli McIntyre, who also plays the role of Dorine, says the most challenging aspect of this particular production has been memorizing and understanding the language.

Another unique detail about Concordia’s production is that the set is being designed by Lewis Johnson, a junior at Concordia.

“It’s a really rare opportunity for a student to get a fully realized mainstage design,” according to Wintersteen.

Despite their differing takes on “Tartuffe,” the directors encourage students to attend both productions.

“We would love it if students from Concordia come over to NDSU and see our production and see the production at Concordia to see two different versions of the new life you can inject into a very old play,” Pace said.

“It’s an opportunity that isn’t around every day,” he said.

Concordia’s production will run from Feb. 15-18 at 8 p.m. and also on Feb. 18 at 2 p.m. at the Frances Frazier Comstock Theatre. Tickets are available by calling or visiting Concordia’s Box Office or emailing thrtix@cord.edu.

NDSU’s production will be showing from Feb. 22-24 and from Feb. 28-March 3 at 7:30 p.m. Tickets for the production can be purchased at the NDSU Box Office in person or by phone or on NDSU’s website.