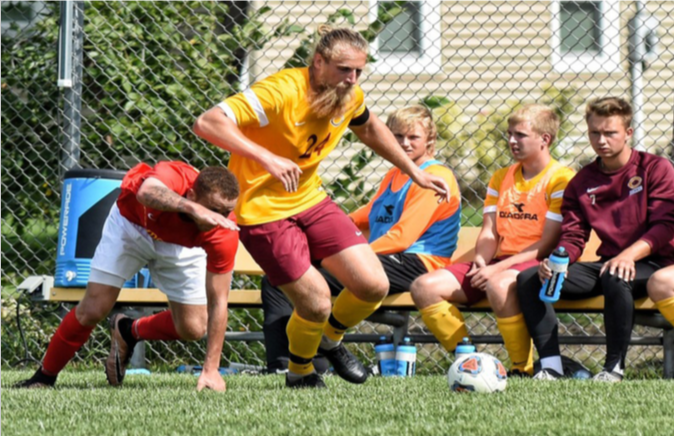 Since the arrival of coach Ben Schneweis to Moorhead in 2012, the Concordia men’s soccer team has been constantly working to become a contender in the Minnesota Intercollegiate Athletic Conference. This year, the Cobbers are hoping to make the jump to the top half of the conference standings for the first time since back to back fourth place finishes in 2009 and 2010.

Schneweis, now in his seventh season has head coach, thinks he has the pieces to make an impact.

“The biggest challenge for us is not a lack of talent or soccer-related skill,” Schneweis said, “It’s mental.”

The Cobbers finished ninth in the MIAC last season with a 5-10-2 record and missed out on the playoffs for the seventh consecutive season. The team lost five players to graduation in May and have inserted two freshman — Nathan Weaver and Tyson Aberle — into the starting lineup at center forward and center midfield, respectively.

Senior defender Austin Peterson, who braces the back four and is a co-captain for the Cobbers, is optimistic about their chances.

“We have a lot of returners coming back who played last year and had the chance to evolve and improve over the summer,” Peterson said. “It’s going to be good this year.”

The team’s other captain, senior defender/midfielder Spencer Lancaster, says the team expects this year to be different than the past.

“We expect a lot,” Lancaster said. “We expect our best year yet. We’re aiming to make the playoffs with a top-six finish.”

Peterson and Lancaster have led the team to a 3-4 start — Concordia’s best since a 4-3 beginning to the 2012 season — as the focus shifts from working out the kinks in the preseason to a grueling MIAC slate. The Cobbers are already halfway to matching their best win total of the last seven years — Concordia had six wins in 2012 and 2016 — with 11 games left in 2018.

Both captains have pinpointed several ways in which the squad can improve moving forward.

“A lot of us have played together growing up, so we know each other’s tendencies and are really comfortable playing with each other,” Peterson said. “We need to be brave in the box, clear balls that are just floating around, and find our marks.”

Lancaster also focused on improvement from dead balls as a way to solidify the defense.

“We need to be tough on our set pieces,” the Fargo native said. “We are giving up a few too many goals right now. We need to be stronger in our box and more clinical in our opponent’s as well. We have been keeping good physical shape and our communication has been going well.”

So far this year, the team has improved its scoring rate from 1.24 goals per game to 1.57 while cutting goals against more than 30 percent from 2.10 per game in 2017 to just 1.43 in 2018. If it can keep that recipe going for the full MIAC season, Concordia has a legitimate chance to break into the playoffs for the first time since Schneweis took over six years ago.

The Cobbers are not only hoping they can make the playoffs. They want the chance to host a MIAC playoff game, which would require a top-four finish, come November. If the team can finish in the top four of the MIAC standings, it would mark just the third time Concordia has managed the feat in the last 15 years and would signify that Schneweis’ turnaround effort is in full effect.

The head coach is hopeful that this can be his team’s year, but knows that nothing will be handed to them.