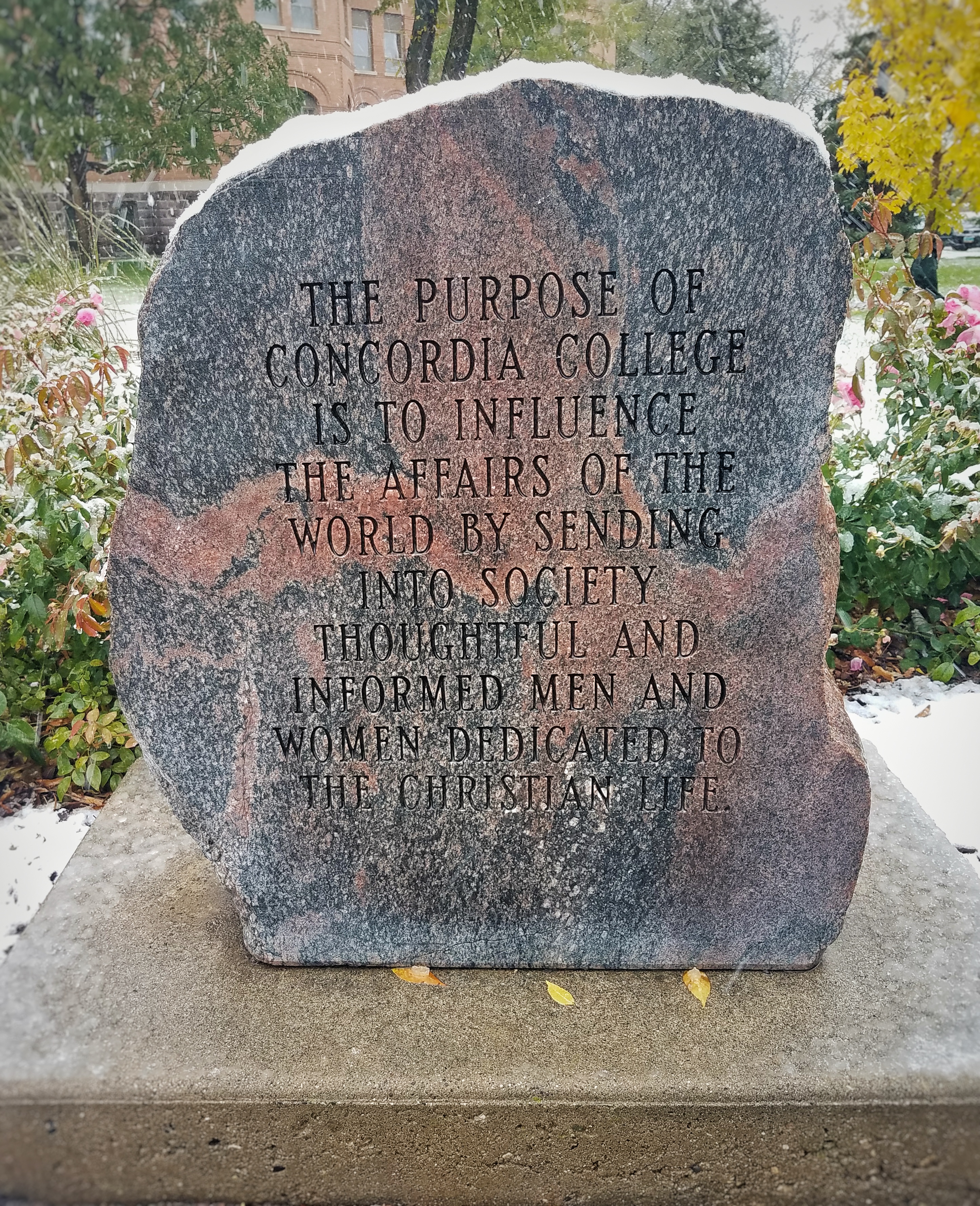 When stepping foot on Concordia, one might notice the large trees scattered across campus or the tall bell tower that rings out time. As you continue past the bell tower, there is a grassy corner by Old Main and Lorentzen Center where pink flowers surround a stone plaque that reads, “The purpose of Concordia College is to influence the affairs of the world by sending into society thoughtful and informed men and women dedicated to the Christian life.” The last five words of this statement have held meaning, along with controversy, for students, professors, and alumni that have included calls to the President’s office in regards to removing this part.

Ahmed Afzaal, a member of the religion faculty, has always found a strong meaning behind the mission statement and has the belief that many people don’t fully read or attempt to understand the statement. In October of 2017, an article was published with criticism towards those last 5 words that resonated with Afzaal. This is where the idea of writing an essay about the mission statement came about, but as he kept writing, he found that there were more thoughts to have on this topic and it gradually became a commentary. When Larry Papenfuss, director of the Dovre Center for Faith and Learning, was approached about publication, there was an immediate interest. After further writing and finalization, in August 2018, Concordia’s Mission Statement: A Commentary” by Ahmed Afzaal was published and 250 copies were created. Papenfuss described Concordia’s religious stance as an institution rooted in Lutheranism, but also open to students of different beliefs.

“My job is to teach and educate, not convert,” said Papenfuss.

The publisher’s note, written by Papenfuss, talks about how the Dovre Center hopes that this book will help discussion grow between the community.

“This book is for anyone who has the interest to learn and understand the statement,” said Papenfuss.

There is a foreword written by President William J. Craft. In this, Craft talks about Carl Bailey, the author of the mission statement, and the intellect and sophistication that went into the creation of this statement. During World War 2, Bailey gave his assistance on the Manhattan Project, the creation of the atomic bomb. Craft talks about Bailey reflecting on that experience and wanting to influence the world and others by a different means, hence the wording of the mission statement. In history, this statement was created during profound events such as the Cold War and the Civil Rights Movement.

“I view the statement as something that came from a specific person, in a specific time, during a specific event,” said Craft.

In regards to Bailey’s statement, Craft feels that Afzaal has interpreted the statement correctly and provides an opportunity to allow any student to understand and recognize themselves in the statement.

“Faith should be a liberating thing rather than something confining,” said Craft.

An idea Professor Afzaal wanted to get across in his book was the idea of Concordia’s body having a soul. The body includes everything you can see such as the infrastructure, enrollment, fundraising, and job prospects after graduation. The soul is invisible, with a purpose, meaning, with a mission and values.

“If the body is healthy, but the soul is sick, then there are going to be some troubles. But if the soul is strong, and deficiencies with the body are overcome” Afzaal said.

In regards to the word “Christian” in the statement and the issue coming from people of all backgrounds, Professor Afzaal reads it as an adjective rather than a noun. By reading it as an adjective, one can interpret it as talking about Christ-like qualities and values rather than a congregation. As a practicing Muslim, Afzaal talks about how it is important to understand the deeper meaning behind the statement.and to see the morals and values that can be shared by all people, rather than seeing the statement as only addressing Christians.

“It’s easy to say that you’re a Christian, but it’s harder to say that you put these values into practice. If you’re dedicated, then show it,” said Afzaal.

In order to help the discussion of the mission statement, Afzaal is organizing discussion circles of 5-6 people, where faculty and students can discuss the issue as equals. Here, he believes that the power difference in the classroom will be eliminated, as he believes that students are able to teach professors as well. In addition to the discussion circles, by searching  “Concordia’s Mission Statement” on Moodle, you will be brought to a forum discussion that is open to faculty, students, and alumni for enrollment. Anyone is allowed to respond to the forum and have a discussion with others about the mission statement if they would prefer not to talk in person.

Copies of the book are available by contacting Larry Papenfuss. Contact Professor Afzaal for more information about the discussion circles