By: Caleb Stiles
In: College, Featured, Sports, Spring
With: 0 Comments 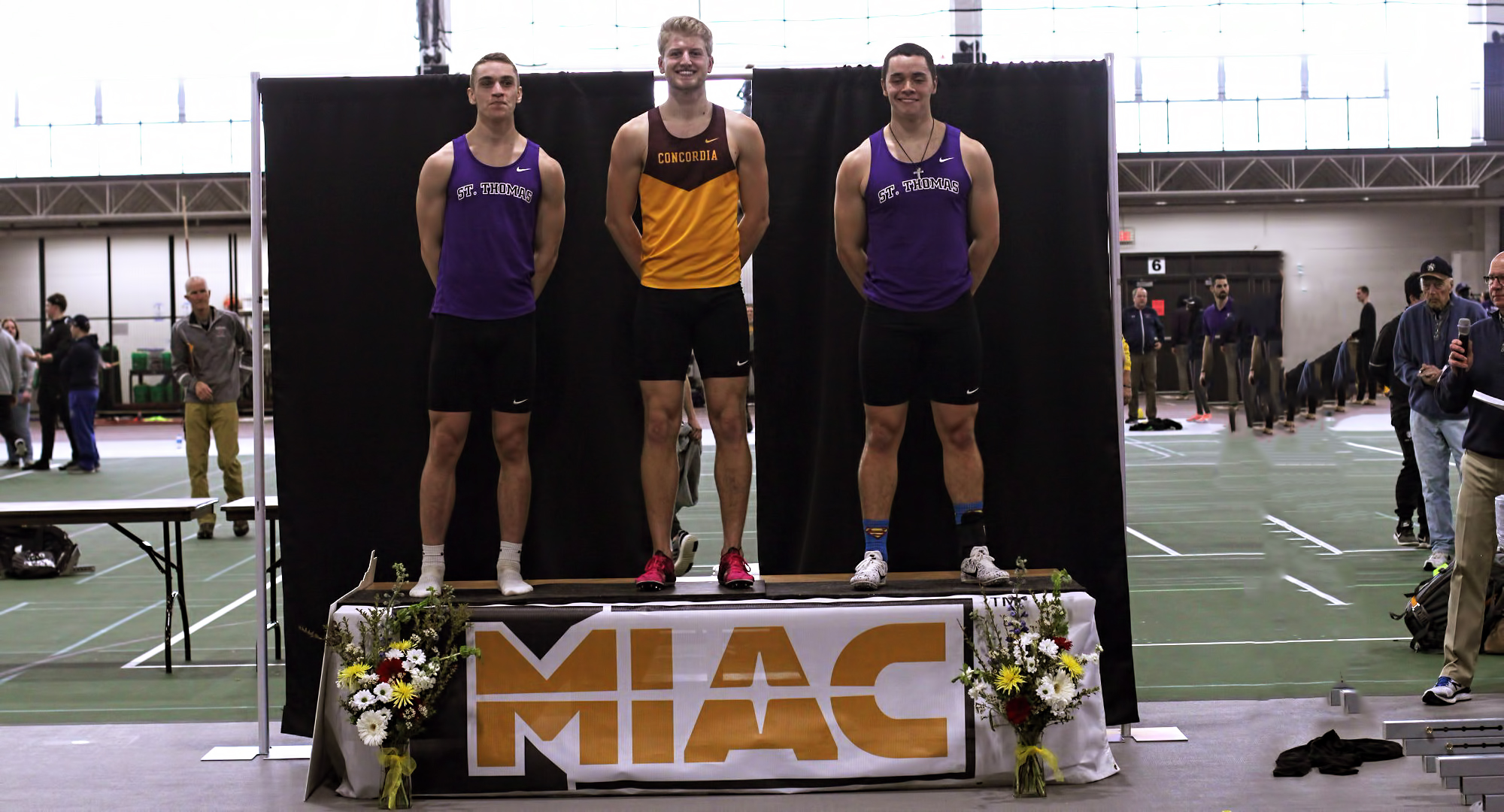 Despite the snow and ice still covering the track inside Jake Christiansen Stadium, the men’s track and field team is already gearing up for the 2019 outdoor season. The squad finished in sixth at the MIAC Indoor Championship Meet last Saturday at Saint Olaf with 53.50 total points. The sixth-place finish is the team’s highest finish since 2015.

The Cobbers were paced by a school record from the all-freshman 4×400 team of Cal Wright, Jake Svenby, Jesse Middendorf, and Hayden Gagnon and an individual championship for Matt Bye in the heptathlon. Bye, a junior, won the 60-meter hurdles, long jump, and shot put on his way to a 4,856-point finish to become just the second Cobber heptathlete to win at the MIAC Championship Meet.

“It was a really cool experience,” Bye said. “I know not everyone gets a chance to experience something like this in their life so I’m trying to be as thankful as possible and understand that it’s a privilege to not only compete in sports, but be able to celebrate successes like this.”

The Moorhead native’s point total is the second most in school history, behind only Jackson Schepp’s 4,884 in 2017. Schepp who won the event at the conference championship meet in 2016 and 2017. Bye joins Schepp, Paul Westmark, Adam Strainer, and Ryan Williams as the only multi-event winners in Concordia history.

Bye’s win at the conference meet comes on the heels of another record-breaking performance two weeks ago. On Feb. 9, Bye broke junior Willie Julkes’ school record in the 60-meter hurdles with a time of 8.50. The time broke Julkes’ record by .04 seconds

“[Julkes] has been sick or injured the past year so I hope he can get healthy and come back and break mine,” Bye said of his friend. “I look forward to competing with Willie when he is healthy again. I knew that the race went well, but I was surprised to see the time I had received.  It has been a goal of mine all year, so it was just exciting to finally reach it. It’s cool to see all the work my teammates and I have been putting in pay off, my race was the one that happened to get the credit, but so many of my teammates have had awesome races this year and that’s exciting to see.”

With his win, Bye qualified for the NCAA Division III National Meet Mar. 8-9 in Boston.

Concordia finished sixth in the team competition thanks to a third-place finish in the 4×400 relay, the last event of the meet, by the aforementioned team of Wright, Svenby, Middendorf, and Gagnon. The freshmen finished in a school record time of 3:24.06 to earn the team six points from the event and a sixth-place overall finish. Senior Sam Haley also recorded a top finish with a personal best height of 14-06, good for second place in the event.

The Cobbers will compete at an NCAA qualifying meet at Wartburg College on Saturday, Mar. 2 for a chance to qualify more athletes for the national meet before turning to the outdoor season.

“After the indoor season ends, we get right back to work so we are ready to perform when the weather clears up for the outdoor season,” senior Jacob Probst said. Probst set a new personal best in the 60-meter hurdles with a time of 9.38 seconds.

“Our mid-distance and long-distance athletes have experienced a lot of improvements and success this year,” Probst said. “A lot of our success can be attributed to our new distance coach, Laura Januszewski. We also have a young sprinting crew that is having a great year competing on our 4×400 and 4×200 teams.”

Bye, who is one of several Cobbers on the track and field team who competes in multiple sports, praised the first years for their strong year thus far.

“The entire freshman class has been awesome this year,” Bye said. “Cal Wright has had the fastest times, but all of the other freshman sprinters have been pushing him and each other all year and it’s inspiring to see the younger kids work so hard.  Nolan Christenson and Jesse Middendorf have been some standout athletes in the longer distances, too.”

With a few more indoor meets and the outdoor season looming, the Cobbers look primed for a run at several MIAC titles.

“I expect all my teammates and I to just keep working hard and pushing each other,” Bye said. “We have some big meets coming up soon so I just hope everyone can stay healthy and compete to the best of their ability.  They all deserve so much credit for the work they have been putting in behind the scenes.”