By: Maci Hamre
In: Campus, Featured, News
With: 0 Comments 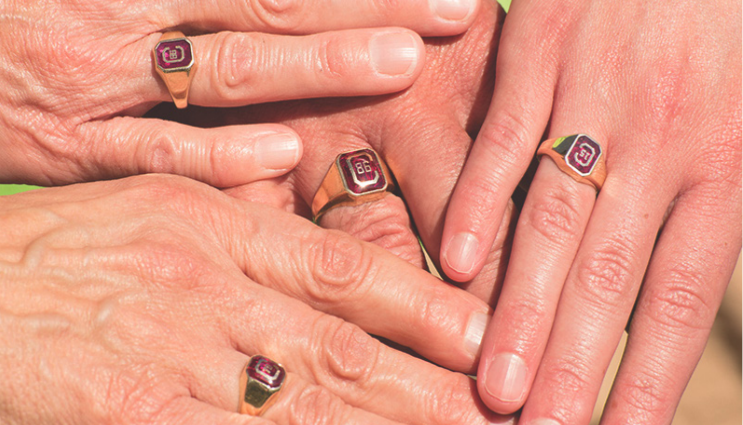 Concordia is filled with many traditions, but there is one that many students impatiently wait for while others feel quite the opposite.

The Cobber ring is connected with both current students and alumni from as long as 100 years ago. The maroon and gold colors and the inscribed “C” have remained the same since 1920. The ring is a tradition known by many, including those who are not affiliated with Concordia, and it can provide unity between Cobbers across the world.

Every year around mid-November, Cobber Ring Day is held, and students who purchased a ring receive it on this day. They are able to take pictures while wearing their ring with other students and Kernel Cobb. However, some students feel excluded because they are not able to afford the ring due to the expensive price.

Junior Stephanie Nelson is receiving her ring this week.

She decided to get the ring partially because of the tradition it holds, but also for what it stands for and the history that comes along with it. Another factor in getting her ring was her older sister, who graduated from Concordia and her ring had opened a lot of doors for her.

“I have traveled to the East Coast and have seen people with a Cobber ring and started a conversation with them because of it. It’s those little connections that I think are really important to me. Also, the ring shows years of hard work that come with attending Concordia College and I think that is also why people are proud of it,” Nelson said.

The Cobber ring has the power to connect current Concordia students with alumni, though there is a lot of controversy surrounding the ring and not everyone feels the same sense of excitement and pride.

Sophomore Maria Toriz Casillas explained why she is not going to purchase the ring. She believes it excludes people, including herself and does not see the purpose of purchasing a ring from a school she does not feel welcomed.

“Concordia and its student body already has a problem with excluding many of their students of color. There are countless racist situations that have happened at this school during my three semesters here. There are also a lot of microaggressions that go on daily with students of color,” Toriz said.

She also discussed how many students of color are here because of their scholarship opportunities, including herself.  Her only option to go to college was through a scholarship at Concordia, otherwise she would not be in college at all.

“I feel that this ring creates an even bigger separation between minorities, people in poverty and people of color, and the rest of the predominantly white and financially stable Concordia student body,” Toriz said.

Senior Miles Korpi purchased the ring as a junior because he wanted to be part of a tradition larger than himself. He had also heard that by purchasing the ring it would open employment opportunities, though he finds the ring problematic.

“First, it reinforces some rather elitist ideas about already privileged people being the more accepted and celebrated than people who may not be able to afford the ring. Second, if the rumors about the ring improving your employment opportunities is true, then the entire ring tradition is reinforcing a system where wealthy people are rewarded for simply being wealthy and underprivileged people are punished for the situations they were born into,” Korpi said.

The Cobber ring continues as a tradition amongst many but the controversy around it still remains.

2019-11-14
Previous Post: PRISM brings instrumental ensembles together in combined concert
Next Post: Film Review: “The Lighthouse” is a psychological thriller