By: Ingrid Harbo
In: Campus, Featured, Nation, News
With: 0 Comments 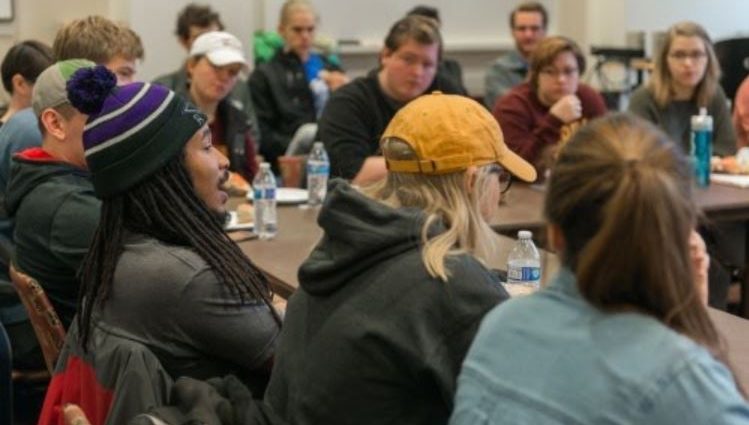 As U.S. senators debated and voted on impeachment trial rules and amendments on Tuesday, January 21, students at Concordia had their own discussion regarding impeachment. The Concordia Political Science department hosted Politics Café, a lunch and discussion centered around the impeachment of President Donald Trump, which gave students an opportunity to discuss and learn about a political event that has only happened two other times in the history of the United States.

Students like Victoria Halvorson, a junior political science major, see Politics Café as a way for students to learn from, and with each other rather than with lectures by a professor.

“There aren’t a lot of times where you get a lot of political science people in the same room,” said Halvorson. “It provides a different opportunity for discussion outside of class.”

While mostly political science majors attend Politics Café, it is open to anyone who wants to talk about politics.

Moore recalled one instance last year where the topic of President Trump led to a discussion on partisanship and how to have meaningful interactions with people who have different beliefs. Because of how interested students were in that topic, the political science faculty decided to make bridging political divides the topic of the next Politics Café.

“We chose to do this Politics Café on impeachment because we assumed students would be interested but may not be super familiar with the process and rules of it,” said Moore.

This month’s discussion was moderated by Moore and Leila Zakhirova, associate professor of political science. They led the discussion by asking a series of questions, starting by asking what impeachment is, and continuing on to more complex issues in the impeachment trial.

The Constitution allows for impeachment after a president has committed a high crime or misdemeanor, which does not have to be an illegal action. A significant portion of the discussion was devoted to talking about whether or not President Trump’s actions were illegal and whether or not they were grounds for conviction, legality aside.

The issue of past presidential impeachments and the precedence set by them was also brought up. Because impeachment happens so infrequently, there is no single streamlined process for how an impeachment trial should be handled, leaving room for discussion on things like the inclusion of witnesses and the practicality of basing the entire process off of the vague instructions set out by the Constitution.

This Politics Café was the first that Jack Spilles, a sophomore political science major, had decided to attend. He appreciated the space to discuss these types of in-depth issues without having to worry about being judged.

“It was pretty open, with a lot of people contributing,” he said. “There was some discourse, so it wasn’t just an echo chamber.”

To remove President Trump from office, two-thirds of the Senate must vote to convict him in the impeachment trial. Most of the attendees agreed that not enough of the Senate would likely vote to convict the president, leading to his acquittal, which would allow him to stay in office for the rest of his term. Politics Café ended with speculation on what kind of political fallout the acquittal of President Trump could bring to the United States.