By: Dominic Erickson
In: Events, Film/TV, Variety
With: 0 Comments 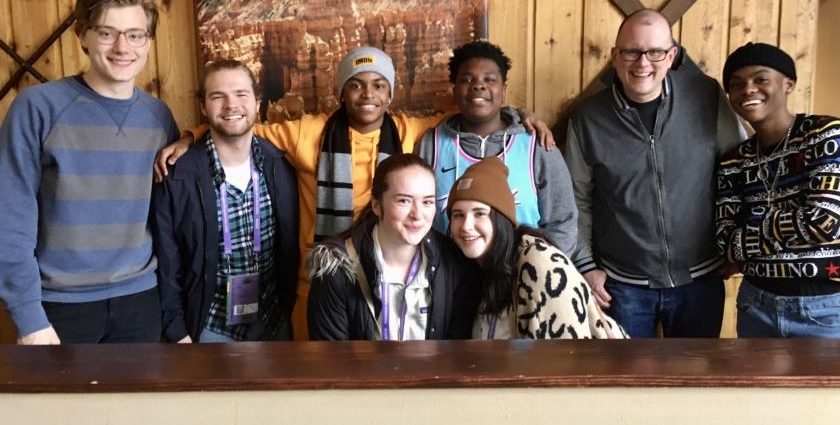 Five students were invited to travel with Greg Carlson, director of film studies, to Park City, Utah for the Sundance Film Festival. From Jan. 28 to Feb. 2, we attended the second week of the two-week-long presentation of screenings of all kinds of movies – short-form, non-fiction, foreign, documentary – in a gorgeous resort town surrounded by mountains.

The hustle and bustle to get to each movie was exhilarating and navigating Park City didn’t take too long to get used to. While we waited in line at each event, we met people traveling from across the world to experience the festival.

Collectively, Grant and I watched 16 different films in our five days at the fest. About half of them were premieres of movies set to release around the middle of the year.

Our first night of the festival, we were lucky enough to catch “Kajillionaire,” which is writer-director Miranda July’s third feature film. The comedy-drama followed a young woman and her parents who spend their days bamboozling strangers for petty cash. When a stranger offers to assist them in a larger-scale operation, their lives flip upside down. The sheer chemistry between the two leads drove this movie home, and “Kajillionaire” was an instant favorite for a couple of members of our party.

The second movie I watched was “Never, Rarely, Sometimes, Always.” This was the third film by Eliza Hittman and her third to premiere at Sundance. The story followed two teens who head to New York City from Pennsylvania after an unplanned pregnancy. The film was as realistic as it is heartbreaking to see the struggles of the two girls navigating the city in search of the proper medical counsel. One of the women I viewed this was especially moved by the accurate depictions of the hurdles some girls have to jump through in order to get an abortion.

I figured I should gain more exposure to international films, so I attended “Jumbo” at midnight on our third day. It was a French movie by Zoé Wittock, starring Noémie Merlant (“Portrait of a Lady on Fire”) as a young woman who falls in love with an amusement park ride. As her relationship grows more and more intimate, the people close to her feel increasingly compelled to interfere. The film was visually stunning, most notably with the colossal mechanical ride’s neon lights pulsating in the night to communicate. The audience I attended it with was audibly split on whether or not the film’s “serious” parts were comical or dramatic. There was lots of laughter by some nearby viewers, much to my chagrin because I interpreted it as the latter.

I almost decided against seeing what turned out to be my favorite film of the fest. “Bloody Nose, Empty Pockets” is a documentary about a Las Vegas bar on its last day in operation. The footage was gathered all in one day as a continuous 18-hour shoot. I found myself laughing really hard and crying just as intensely as the film progressed through the day into late in the night. The bond amongst the patrons grows stronger as the day goes on. The more inebriated they become, the more they lament about their shortcomings in their lives and the generational gaps they’ve come to experience. It’s a slice of Americana, a small glimpse into a disappearing generation and by far my favorite film of the festival.

On the very last day of the fest, I decided to treat myself to a movie that generated a lot of buzz within our party. “Omniboat: A Fast Boat Fantasia” was an absurdist movie constructed by 14 directors. Told over a handful of separate vignettes all involving a speedboat, “Omniboat” employs different filming styles and themes to each scene. The Miami-centric gags and varying themes created a day and night difference to some adjacent segments of the film. Even though I had never seen so many people walk out of a theatre in the middle of a screening, I allowed this piece of subtropical art to take me for a ride and loved it.

One of my favorite parts of attending these movies was the applause after each screening. Hearing a packed audience excited for the showcase of art that involved so many people was magical. Feature debuts, follow-up features and passion projects received the praise of both casual movie-watchers and industry veterans.

Overall, our group had an amazing time. A film festival is a learning experience, not just a box to be checked off on a bucket list. There was a sense of connection knowing that we had all been brought together for one united cause – our shared love of cinema.