By: Dominic Erickson
In: People, Sports, Spring
With: 0 Comments 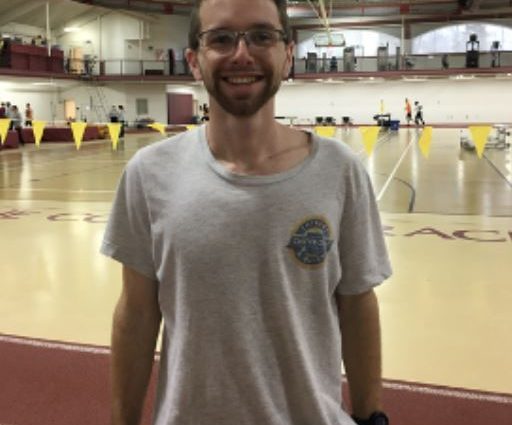 An indoor track meet in Olson Forum is a spectacle unlike any other sporting event held at Concordia College.

The floor is filled with runners hastily making their way around the track, throwers loudly grunting as they heave their projectiles across the gym and jumpers trying to catch as much airtime as they can. The balcony is filled with enthusiastic spectators that have traveled from all over the region to watch. The athletes are filled with both nerves and determination, constantly moving about like ants in a colony.

Although the meet is small, with only a handful of teams present, the energy is the same of that as a meet with two dozen teams.

As the 1600-meter race nears its finish, Concordia senior Eric Wicklund holds a close lead over a senior from the University of Minnesota Morris. The gap gradually tightens more between the two runners reaching their highest speed on the last stretch of 50 meters. The Morris senior looks like he’s about to pass Wicklund, but Wicklund reaches the finish line first by a mere two-hundredths of a second.

Wicklund is a social studies education major. His skill for running has been put on display during his impressive four-year involvement with Concordia’s athletics program. He’s known as one of the most committed runners on the team, and has been recognized as a great role model to other student athletes.

After finishing, he clutches his chest and walks around the north end of the track to catch his breath. Afterward, he high fives all of the other competitors, setting a great example for all the other athletes in the gymnasium. There is little energy left in him; his head is bowed and he gave this event everything he had.

Although Wicklund took first place, he said his time was nowhere near what he is used to. He believes he could’ve finished faster by about 10 seconds or more. He said the race was painful and that his chest was on fire the entire time.

“Given the circumstances, I’m pretty happy about it,” he said. And he should be.

A couple of days before, he fell very ill and had enormous difficulty completing that day’s practice. It was doubtful that he was going to partake in Saturday’s competition. He was prepared to only help pace his teammates and cheer on Concordia’s runners. But apparently, after a hearty breakfast of eggs and toast, Wicklund felt well enough to go the distance.

His drive to try his hardest was put to the test, as he easily could’ve taken the race easier and used his pain as an excuse. But evidenced by this home race win, Eric Wicklund is not an athlete that makes excuses.

Wicklund ran cross-country and track all through high school. He wrapped up his collegiate cross-country career in the fall – a bittersweet feeling for any serious athlete as invested in the program as he. One team he’s said goodbye to, one to go.

He says he’s glad his collegiate career has come to a close and he looks forward to doing his own thing. He thinks independence from the team will be good for him as he explores his own way to continue his running through the rest of his life.

In his free time, he chooses to stay active by running, biking or skiing. He spends time working at Scheels in Moorhead. He even has an Instagram account for his black lab, Rex.

Riley Satterwhite, one of his coworkers at Scheels, said that Eric has always been a joy to work with.

“He’s a really nice guy. We worked in the same department for a bit and a couple times in particular we had an absolute blast,” he said.

Satterwhite explained that Eric prefers his name be pronounced EER-ick “because that’s the way his great-grandfather pronounced it and Eric wanted to honor that,” he explained.

Wicklund’s track and women’s cross-country coach, Laura Januszewski, expressed her appreciation for his devotion to the team throughout his involvement in all four years.

“He is extremely diligent and works really hard to not only develop his running career, but also that of those around him,” she said. “His work ethic has brought him much success in his running tenure and I know there are still big things to come from him.”

She added that he’s someone whom many students on the team look up to. She said he talks frequently about the growth of the athletics programs and how “one of his goals in his four years as a Cobber has been to leave the program better than when he came.”

To cool down, Wicklund normally runs a couple of miles right after his 1600-meter race. Today, he has chosen to recuperate by cranking out four miles on the treadmill. He said he needs an extra recovery after today’s performance. He expected that he was done for the day.