Cobber football team looking to bounce back in big way

By: Sam Huseby
In: College, Fall, Sports
With: 0 Comments 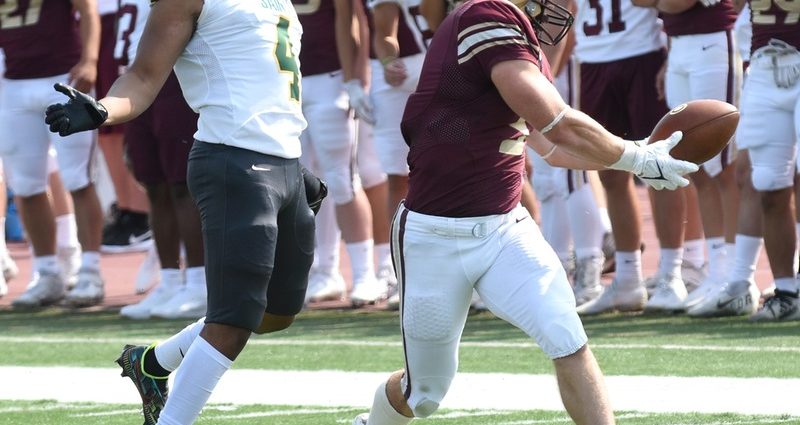 The Cobber football team opened MIAC play in St. Peter last Saturday, falling to Gustavus by a final score of 36-21. The Cobbs dropped to 1-2 (0-1 MIAC), and they look to bounce back this weekend with No. 5 ranked St. John’s coming to Moorhead for Concordia’s homecoming.

Cobber head coach Terry Horan has no doubt his guys will be ready to take on this conference matchup Saturday.

“I know us coaches don’t have to do much to get our guys motivated being that it’s (against) St. John’s. We know they’ll be fired up and ready to go,” Horan said. “It being homecoming makes it that much better, as we know we are going to have a great crowd come out and support.”

With a fresh new offensive system, Horan likes what he has seen from his offense, especially his starting quarterback Tanner DuBois. Horan expects the Cobber offense to stay hot this weekend.

“We just put this system in this year, and Tanner’s been doing a great job. Obviously, he will get better as he gets more reps, more bullets fired in his face in a live game, so we expect the offense to keep rolling and doing what they’ve been doing,” he said.

Horan and the Cobbers know that St. John’s has a high-powered offense, with the offense averaging 500 yards a game.

“They have a great offense, really good line, a D1 transfer at quarterback in (Aaron) Syverson. We want to keep them off the field as much as possible; we’re looking to sustain drives and keep our offense out there as much as possible,” Horan said. “When our defense is out there, we’ve got to make sure we make our reads, beat them to the spot, and win every battle we can.”

Concordia needs to show up in every aspect of the game to be able to take down St. John’s, especially special teams.

“Last week on the road we gave up an 89-yard kick return after we had taken the lead, and that was a dagger. You can’t give up those big plays to a good football team,” Horan said. “A good special teams can win or lose a game for you, so all three phases are huge for us. We have to have a three-phase game for 60 minutes.”

I asked St. John’s head coach Gary Fasching about how his team has fared so far this year, and what they need to do to stay undefeated.

“We have been fairly balanced on offense so far this year, we have run the ball effectively and have been able to make plays in the passing game,” Fasching said.

Leading the way on the ground for the Johnnies is a two RB committee, with even carries going to Henry Trost and Devin Vouk, combining for 133 rushing yards per contest. Taking the reins in the passing attack is senior Ravi Alston, who is averaging 117 yards through the air for the Johnnies.

When asked if he expects any one player to be the hero, Fasching stressed the importance of playing as a team.

“We never single out one guy that needs to be the key for us. Football is the ultimate team game, so everyone needs to do their job for us to be effective as a football team,” he said.

Concordia has one of the top air attacks in the MIAC, and Fasching is well aware:

“I have been really impressed with the offensive attack of Concordia. They have a very mobile QB who throws the ball well, and two of the better receivers we will see this year in (Andy) Gravdahl and (Zach) Wolf.”

Coming into Saturday, Cobber QB Tanner DuBois is averaging 325 passing yards per game, with the above-mentioned receivers accounting for close to 200 per game between the two of them, and the Cobber passing game will look to stay strong against a Johnny defense that has found a bit of a weak spot in pass coverage.

“We have struggled a bit on the defensive side of the ball. We need to improve at both the linebacker and defensive back positions,” Fasching said.

The Cobbers are looking to get back-to-back wins against the Johnnies, as they were able to take down St. John’s in Collegeville in 2019. With no shortage of crazy plays, including three blocked extra points and five Johnny turnovers, the Cobbers will look to keep the magic alive this Saturday.

2021-09-30
Previous Post: Opinion: TikTok is preying on your mind’s constant need for gratification
Next Post: Album review: Poppy rocks out in “Flux”