By: Rachel Hauschildt
In: Community, General, Sustainability
With: 0 Comments 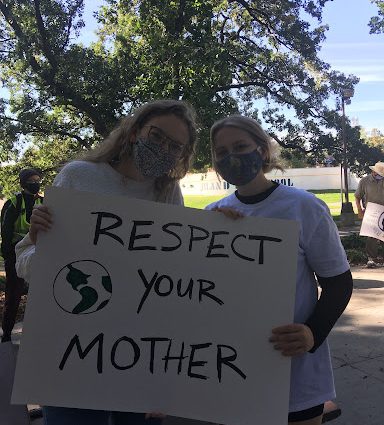 Students and residents of the Fargo-Moorhead community gathered at 3 p.m. on September 24 at Island Park in Fargo. They marched to Fargo City Hall to bring awareness to the ongoing climate change crisis. About 30 to 40 people showed up in support of the protest.

At Island Park, participants made signs for the march. After that, they headed to City Hall to pressure local politicians to take action for climate justice.

Fargo resident Eileen Nunley said, “We need to get the message across that climate change is here and it is serious. At least we can inspire our local politicians to do something.”

At City Hall, North Dakota State Representative Ruth Buffalo made an appearance in support of the march’s cause.

According to the UN, the world has less than 10 years to make changes before the point of no return. Many of the climate strike participants blame big businesses and inactive government as a cause for the hefty natural disasters that are happening now. Strikers also believe natural disasters, like the ever-present wildfires, tsunamis and hurricanes will continue to happen and will grow worse if no change is done.

Knights of the Climate Covenant is a nonprofit on a mission to increase the number of people in the world who take nonviolent personal, community and political actions to address global warming and the resulting climate change. The Knights helped sponsor the Fargo-Moorhead Climate Strike.

Martin C. Fredricks, CEO and Founder of the Knights of the Climate Covenant, said, “We are one of a thousand events happening right now today. And so a lot of environmental and social justice organizations in Fargo got together and said, ‘Hey, we want to do a march.’ We want to bring attention to the fact that the world is burning.”

The Knights’ motto is “All for One Earth, One Earth for All.”

“We want to help educate, to bring attention to this,” said Fredricks. “Especially about the inaction by governments around the world and from the city of Fargo all the way up to the U.S. Congress.”

Some of the chants included: “No more coal, no more oil! Keep that carbon in the soil!,” “Climate justice is what we need, not billionaires and corporate greed!” and “They can’t stop the revolution! We are the climate solution!”

Other local organizations helped set up the event. CLEAN (Citizens Local Energy Action Network) also lent a hand in support of the Fargo-Moorhead climate strike. Their mission is to create a cleaner, safer place to live and work. At the event, this organization handed out brochures that offered hands-on ways for participants to help reduce climate change at a local level — such as advocating for alternative transportation fuels, reducing the town’s air pollution to nothing and focusing on one community at a time. The organization is proactively taking steps for a cleaner future for the Fargo-Moorhead area along with the Knights of the Climate Covenant.

Campus-centered environmental groups became involved in recruiting for Fargo-Moorhead Climate March. Claire Mohr — senior environmental and communication studies major at Concordia said one of their main goals is to get first-year students involved and to provide more resources to students to join the cause.

Concordia junior Anna Larson said, “This is our future, this is our generation. Our generation is going to have to deal with the damage.”

Today’s college students have the opportunity to protest and advocate for what they believe in. Either way, our generation cannot escape our own future.

2021-09-30
Previous Post: Opinion: Tax the rich, but not me?
Next Post: Cobber football team looking to bounce back in big way