Behind the mail slots

By: Bethanie Whitmore
In: General
With: 0 Comments 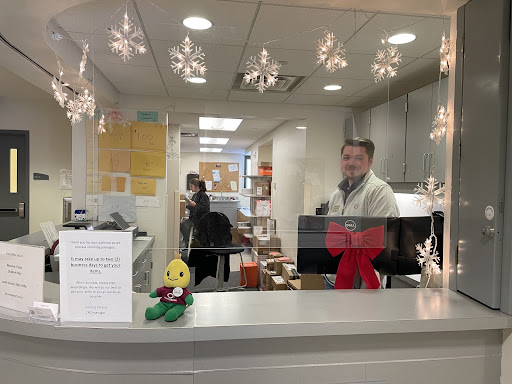 On an average day in January, Concordia College’s on-campus post office is overwhelmed by anywhere from 150 to 200 packages that need to be handed to students by post office manager Connor Poland and student workers.

The post office window is open to students and faculty from 10:00 a.m. until 4:30 p.m., and its business varies throughout the school year. According to Poland, the office is most bogged down with hefty orange cardboard boxes of textbooks from Chegg and various other packages near the beginning and end of a given semester. This is because students typically order class materials and other items such as decorations for their dorms before classes resume. Near the end of the semester, students return the books they’ve rented through online services, and graduating students often send out graduation invites through the campus’s post office.

An overwhelming load of mail can be stressful and tedious. When it becomes backed up, Poland said he only has one option.

“We just keep going,” Poland said. “We buckle down and prioritize the older stuff first.”

Every weekday, Poland arrives at work around 9 a.m. To start his shift, before beginning to rake through physical mail, Poland combs through his virtual mail, emails and voicemails. Then, he sets up the office’s till and postage meter before pulling up all of the lists for processing boxes that have arrived for students and staff. Starting small, Poland and student workers sort through the hundreds of envelopes, magazines and newspapers that have been delivered before setting them in their rightful CPO boxes.

Once the paper mail has been sorted, staff move on to processing the larger boxes. When the office’s window opens at 10:00 a.m., there are often students already eagerly waiting for their packages. When they aren’t processing packages, staff are either handing them out or filling out the small pink paper slips that are put into students’ mailboxes to be traded for their package at the window.

According to student worker Lutricia Zambezi, the most rewarding part of her job at the post office is how calming it is.

“It’s relaxing,” Zambezi said. “It’s something different from school and everything else.”

One thing that the staff at the post office agree on that makes their work less relaxing is when students don’t put their CPO box numbers on their packages. When this isn’t done, workers have to comb through long lists of student names in order to find the numbers. This slows down how quickly they’re able to get students’ packages to them and impacts the general efficiency of the work.

Workers have been making an effort to emphasize the importance of CPO numbers, and the situation has slowly improved. Still, this is an area where workers hope to see continued improvement.

2022-01-20
Previous Post: A new space for Gödel the Turtle
Next Post: Clearing a path: The unsung heroes of a cold campus commute