Art in the Anthropocene 

By: Paul Sternhagen
In: Art, People, Sustainability, Variety
With: 0 Comments 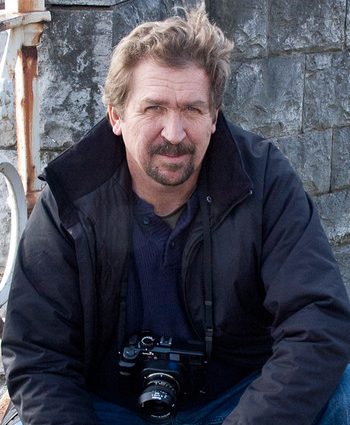 Rows upon rows of white stalls line the walls of Aptitude Creative Studios. The atmosphere is that of an open-air market, awnings and baskets evoking the feel of a crowded street, despite being squeezed neatly between a Best Buy and a nail salon.

It is in this environment that the photography of Tim Lamey is displayed. The walls of his booth are covered in gorgeous landscapes of the North Dakotan countryside as well as black-and-white wildlife portraits.

Hidden among these idyllic scenes of nature are shots that tell a bleaker story.

In one shot, two massive white oil tanks dominate the frame, with a distant forest cramped between them, forced into the background. In another, felled logs are piled high, covering the horizon and forming a “mountainous” landscape by themselves.

“Tim’s done a couple of series in the past five years, one of which had to do with the oil boom around Roosevelt national park, and the other was to take photos to record ecological damage being done to our landscapes,” said Tania Blanich, an organizer for The Arts Partnership.

But for Lamey, even the shots that do not feature ecological damage explicitly still live in its shadow.

In one photo, a lone tree stands proudly atop a golden green hill. Today, the hill stands barren, the tree killed as part of a controlled burn.

“We have so many human-altered landscapes around us we don’t think about it. We see a pasture or a field of wheat, and we think of it as prairie,” said Lamey. “Well, it’s not.”

This pervasiveness of human culture is something Lamey struggled with early in his career as a nature photographer. However, as his message developed over the years, so did his approach to the shot.

“I’ve gone from early in my process of photography where I was trying everything I could to eliminate visible signs of humans to just saying, well, signs of humans are kind of everywhere, we have to embrace it and take it for what it is,” said Lamey.

The process towards embracing this dichotomy of the human and the natural began long before Lamey considered himself a photographer.

“What’s interesting about Tim is he was a biologist, so he has a very different approach to nature and his landscapes are always – I mean they’re beautiful, but they’re also kind of fraught,” said Blanich. “With that exhibit about the oil boom around Teddy Roosevelt National Park, he also included background information. You see this beautiful vista but on this map, you see that behind this view, literally behind it, are twenty visible oil wells.”

Lamey earned a master’s in biology, and eventually earned his doctorate by studying penguins. He continued studying birds for several years academically, and despite his 15 years of experience at the time, had difficulty finding work in the field.

“By a weird twist, I found myself employed by a small software company, Great Plains Software, which got bought by Microsoft,” said Lamey. “So I ended up being, I believe, the only penguin biologist to work for Microsoft.”

Tim worked for Great Plains Software for around 15 years before deciding that the stress of the position was getting to him. Through careful financial planning, he was able to gradually get more involved in photography before moving to full-time.

The transition into photography was not a fast process and involved a lot of trial and error.

“I had been doing photography for maybe two or three years when I started to think that maybe I needed to be more focused in what I was doing,” said Lamey. “I was just out there trying to find pretty pictures of the landscape for years – I decided the logical thing to do was bring together my understanding of biology and art.”

Throughout this period of experimentation, climate change was once again starting to become a global talking point. This turned out to be just the focus Lamey needed.

“I feel that art can also be educational,” said Lamey. “As a scientist, I could make all kinds of arguments about why climate change exists, but as we see from looking at the public, the scientific arguments don’t seem to win out. So maybe we should take a different tactic to try to convince people. Maybe art is the way to play this.”