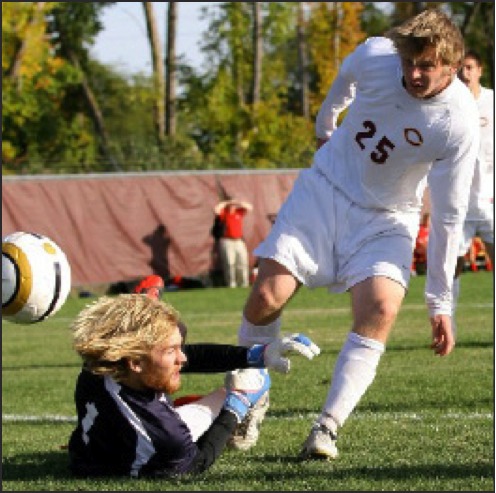 The sun had just dipped down under the horizon, still with enough light where colors were starting to blend to gray.  The evening cool was settling in, and the wind chill cut into my jacket.

The last stretch of grass from the practice fields was flattened and yellow from all the foot traffic it receives. I walked over it for the last time in a Concordia white home jersey after game day.

There are plenty of cliché’s that describe when something ends. All good things have to end, people don’t miss something until it’s gone, or that one should enjoy the good times because they don’t last– just to list a few.

I’m not a big fan of clichés, but I use them more often than I think. I also don’t like people that criticize the use of clichés because they still mean something if someone says it honestly. When older teammates say again and again it “goes by fast”, that phrase still never really hits home until it actually happens. For three years, I listened to teammates in their last year of playing remind us that the time we have together is precious and to take it all in.

At the end of the men’s soccer season this year, five seniors ended their competitive playing career, including me. I still wasn’t sure what to expect. There are some things you can never fully prepare for, simply because you can’t know what it feels like to do something you’ve never done before.

As much as I’d like to say the score of our last game didn’t matter, it did.  It’ll be hard to forget the final score of one’s last competitive game – even more so when it’s a disappointing 0-2 loss. We stood together in our last team circle, all together one final time in this setting. This is when we felt the weight of what the day meant. We talked, like we always did after game, and said what it was we were thinking or wanted to say.

The first thing I thought of while I held the white jersey that’s been mine since I was a freshman to my face and as emotions started to build, was how it felt in the past to listen to former teammates talk after their final game. How emotions mix between sad, depressed, heartened, sympathetic, respectful and concerned in your mind while you try to hold back tears and listen to them share.

The idea that a person can’t really understand how it feels to be on a team unless they have been on one is accurate to a point.  I’ll never know what it’s like to be on an NFL team because I am not of prototypical size, speed, talent, skill or knowledge – at least as much as six-year-old me imagined it.

In my experience, a good team, and I emphasize the good part, is like a group of people that you feel are your brothers. They become an extended family. Not all brothers are best friends (especially hard to do in a family of twenty five-plus people), but they all care for one another and respect each other. Regardless of the outcome of games, conflicts or playing time, they stick together.

As people shared their thoughts and tried to leave a message with the younger teammates, I kept alternating between rubbing my tear-filled eyes and hiding my face with the number three Nike jersey that had always been too big for me.

I listened to my teammates who I’d spent four soccer seasons and school years with express what they were thinking.  I thought of how living with your teammates and friends creates some of the best times.  I’ll never forget staying up much later than we had to on weekdays to sit in our basement and watch movies. Homework wasn’t necessarily “finished” and other things might have been put off for a few hours.  We might have been looking for ways to procrastinate, and I think part of it will always be that we were all together, so why shouldn’t we stay up late end enjoy it?

We went through plenty of up and downs in our career, and we lost some teammates along the way due to plenty of different reasons. Though, a few that had left the team never really did because we tended to stay friends. For those that were together the whole time, it’s hard not to have a great deal of respect for each other because you’ve seen and been through so much.

We finished our conversation, had one final team cheer to end the season, and, to keep with tradition, seniors got carried off the field. We shared some hugs with one another and had a picture session with each of our families while the returners walked to the locker room.

We were told we could stay on the field as long as we wanted, but we didn’t linger much longer after all the cameras had documented us. I didn’t think staying longer would help or hurt. We had dinner plans to rush off to, but one long moment doesn’t change all the great memories I have in my head about my playing career and our team.