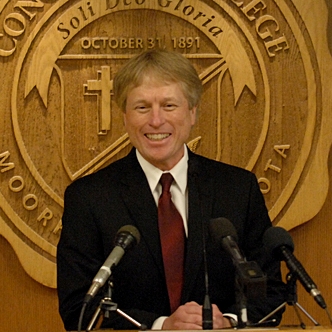 Glas takes over for Larry Papenfuss, who came to Concordia athletics in 1994 and was chosen as director of athletics in 2004. Papenfuss will now take over the duties as an overseer of the Office of Alumni Relations and the Annual Fund, and as a major gifts officer.

According to the news article “Rich Glas Named Athletic Director” on the Concordia athletics website, Papenfuss was a key figure in funding the Update the Jake campaign.

As busy as Glas will be in March, he will continue to coach men’s basketball in addition to starting his new duties as the director of athletics.

According to the same article, President Craft believes that Glas is the ideal person to take over duties from Dr. Papenfuss.

“Rich is ideally suited to lead our athletics program,” said Craft. “He brings the skill and passion of a gifted coach, the devotion to student learning that marks a true teacher, and strong leadership experience to help us maintain momentum and build on our tradition of excellence.”