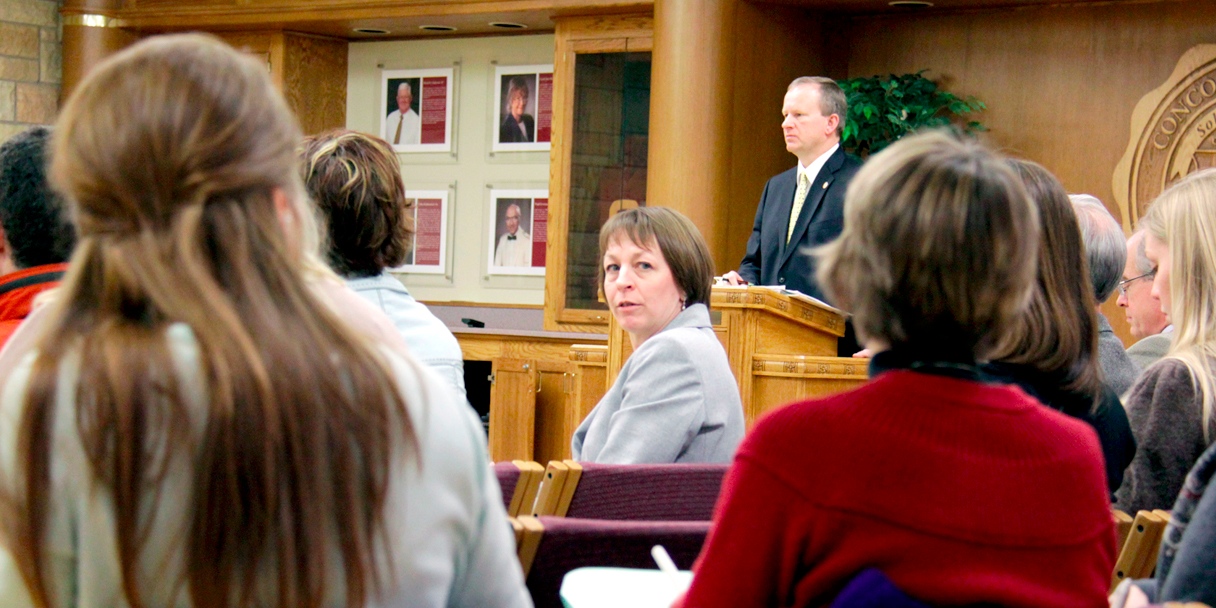 Faculty Senate approved a change in the course catalogue Monday that now mandates that a minimum of 50 percent of a student’s major requirements be Concordia coursework. The motion carried unanimously.

Previously, according to the proposal by the curriculum committee, Concordia’s policy required students to earn at least 28 semester credits and spend at least two full-time semesters at Concordia prior to graduation. Courses through the tri-college university system count as Concordia coursework.

“Many departments feel uncomfortable with putting their stamp on a degree that only has two courses completed here,” said associate professor Carol Pratt, chair of the curriculum committee.

This change in the catalog affects transfer students, primarily, who may matriculate into Concordia after completing a substantial amount of work at another institution. It is not, however, meant to deter students from transferring into Concordia but ensure the consistency of their education with the college’s mission.

Mark Krejci, provost and dean of the college, noted that this does affect only a small number of students, as 85 percent of transfers come in with four courses towards their major or less.

Questions were raised from members of the senate about what can and cannot count towards the 50 percent and whether or not tri-college courses should be included as true “Concordia coursework.”

“By no means does this restrict a student from transferring credits,” said Susan Larson, chair of the psychology department. “They can still count the courses, just not towards their major.”

A similar motion was passed to require 40 percent of minor coursework to be from Concordia.

The senate also approved the addition of a new minor in vaccinology. Sanford Health has given the tri-college a grant for 24 students – eight from each school – to earn a degree in the recently growing business of vaccinology.

Pratt said that of the 200 students who begin their freshman year on a pre-med track, an average of 30 students finish their career as a pre-med student.

“The biology department found this intriguing because many [science students] don’t always consider going into the business of biology,” said Pratt. According to senate discussion, the Red River valley is a “hot spot” for vaccination development.

Most courses for this 42 credit minor are offered through the biology department, so this minor will serve as an exception to the institutional rule that says a student cannot major and minor in the same department. Biology and chemistry students are eligible to enter the program.

George Connell, professor of philosophy, raised concern about the ever-growing size of Concordia’s majors. If course requirements continue to increase, he said, it might prevent students from exploring outside of their major.

Darin Ulness, associate professor of chemistry and neuroscience, assured the senate that the science faculty is aware of the need for balance between exploration and preparation for careers in the changing landscape of science.

“We’re not adding science courses from the 1960s,” he said. “I’m asking for a degree of trust that we are incorporating the things we value from the humanities into this major.”

Student Body President Tyler Dugger mentioned that as a double major with a minor, much of the core courses he took as exploration also double counted towards his major. Science students, he said, don’t have the luxury of taking a history course for core and also having it count towards their chemistry major.

“In that respect,” he said, “science students actually receive a greater breadth of exploration than most other students.”

Faculty Senate meetings take place Mondays at 4 p.m. and are open to the general public.