Blogging on the rise 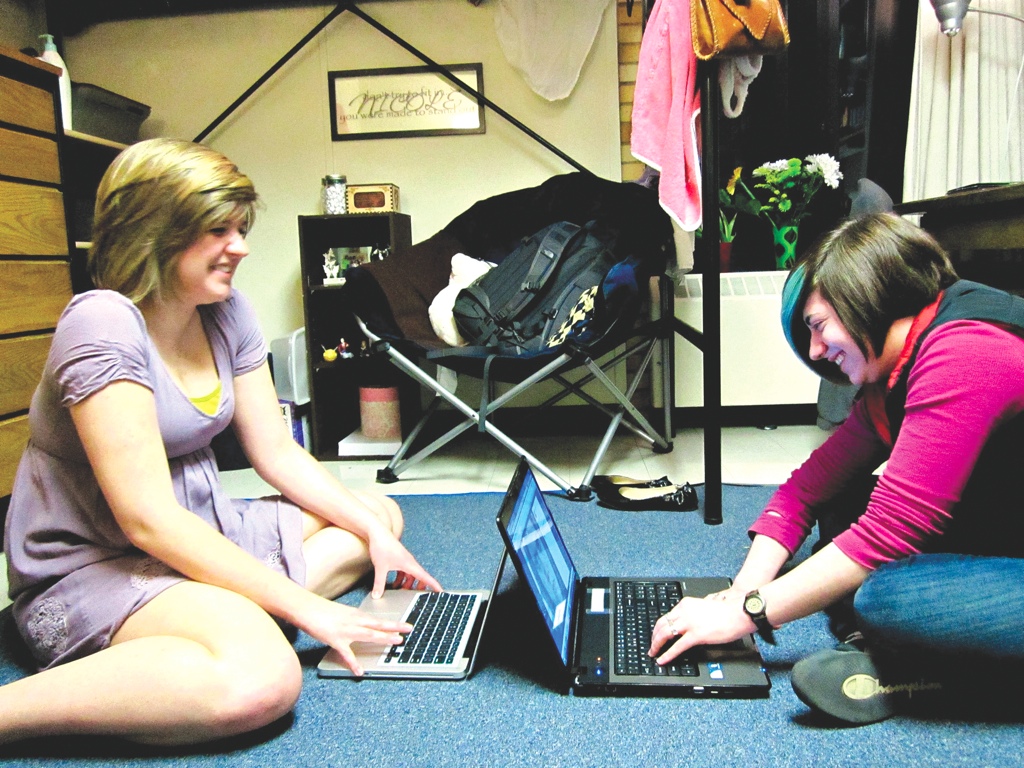 This article was written by Meg Pittelko, a contributing author at The Concordian.

After a long day of orientation activities, freshman Nicole Kippen slid into her desk chair and flipped open her laptop. With a mess of new faces and a jumble of names floating around in her head, Kippen stretched her fingers across the keyboard and began to type.

“It was such a tiring day,” she wrote, “but I did learn quite a few things.

1. Never forget your bed is lofted when getting up.

2. Naps, no matter how short, are a blessing.

3. Try not to slam your finger in the door. Ouch.

4. Stick to your gut feeling.”

Upon arriving at Concordia College, the constant rush of information and the overwhelming amount of new experiences inspired Kippen to find an outlet, a way she could share all that she was going through with her family and friends.

“I got to college and I was like, ‘Holy crap! I’m learning so much!’ But I couldn’t tell anyone,” Kippen said. “I wanted to record what was going on in my life.”

Kippen’s solution is one that has become increasingly popular among young generations, namely high school and college students: She created a blog. She calls it “Dorm Room 718,” and she writes about her life in a forum that could be read by anyone with access to the Internet.

Another freshman, Megan Schindler, maintains her own blog and often guest-posts on Kippen’s blog.

“I love being able to communicate my thoughts to an audience,” Schindler said. “I love to make people think, and I can pose a lot of questions while blogging or try to present a new perspective. It also helps me keep my own life in perspective.”

Concordia, which has been home to the student-driven COBBlog since 2005, has also seen such an increase, according to Gia Rassier, the college’s online communication specialist.

“Inevitably, as more Concordia students are familiar with creating and maintaining a blog, we’ve had a higher volume of students apply for available positions,” Rassier said in an e-mail interview.

“Blogging has become a trend among younger people and students,” said Greg Carlson, a media professor at Concordia. “Anyone who wants to express him or herself can go towards a blog to get their message out.”

Carlson, who has maintained a film-review blog for years, said that people are drawn to blogging for various reasons.

“Online portals allow you to fully construct an identity that is part of you and yet distinct from you,” he said. “Blogs can also be an opportunity for self-disclosure.”

Likewise, Carlson said that writers of every status are attracted to blogs because of the unique readership that they acquire, which he believes is partially due to the fact that blog content is as varied as the internet itself.

“Even though we think of the internet as new – a way to make forward progress – it also works as a time machine that goes backwards to allow access to things we couldn’t otherwise access,” said Carlson, who has been able to archive film reviews dating back to 1999 on his blog.

Carlson said that blogs can act as a communal diary and that people tend to be “emboldened to share things electronically that could be seen by anyone, but are too intimate to say face-to-face.” This is an idea that Schindler and Kippen agree with. Schindler said that it is important for people to be able to share their opinions.

“We’re so busy all the time these days – especially in college – that to sit down, lay out your thoughts, and then post it for someone to read is empowering in a way,” she said. “It’s a level of control and connection that people want to have.  It’s kind of like an online journal you choose to make public.”

Likewise, Kippen said that many of her friends’ blogs express feelings of anxiety or depression and provide a place for them to say things they wouldn’t necessarily say to someone in person.

“When you’re going through all of that, you’re really scared. Writing is all on your own terms, while a conversation is two-way,” she said. “Blogging keeps me accountable. It just keeps you accountable to someone.”

Blogs – ranging in stature from full-text blogs through sites such as WordPress and Blogger to microblogs like Facebook and Twitter – have even made their way into the classroom. David Albrecht, a professor of accounting who often supplements his classes with blogs, said that he has been recognized frequently for having a top blog in his field and often presents workshops at conferences on the topic of social media.

“I think blogging matters more in 2012 than it did, say, in 2009 or earlier,” Albrecht said in an e-mail interview. “It is becoming more accepted as part of the environment.”

Albrecht said that, by using blogs in the classroom, professors reach a new level of instructional effectiveness. Blogs allow students to learn from each other, he said, by giving them access to the work of their fellow classmates and forcing them to think critically about that work through written commentaries.

However, Albrecht isn’t entirely sure that the importance of blogging will continue to increase. “Blogging has matured and now seems an integral part of the 2012 landscape,” he said. “What will the landscape look like in 2020?  Who knows?  Surely, however, it will be different than it is now.”

Meanwhile, Kippen – along with millions of fellow bloggers – will continue to sit down at her desk every few days and compose her thoughts in a relatively brief post.

“If I’m having an issue, I can write about it,” she said.

Then the friendly, seemingly carefree woman confided that she first stumbled upon the idea of blogging while undergoing treatment for severe anxiety. Despite Kippen’s expectations, the outcome was exactly what she needed:

“Blogging has forced me to look for the good things in my life,” she said.