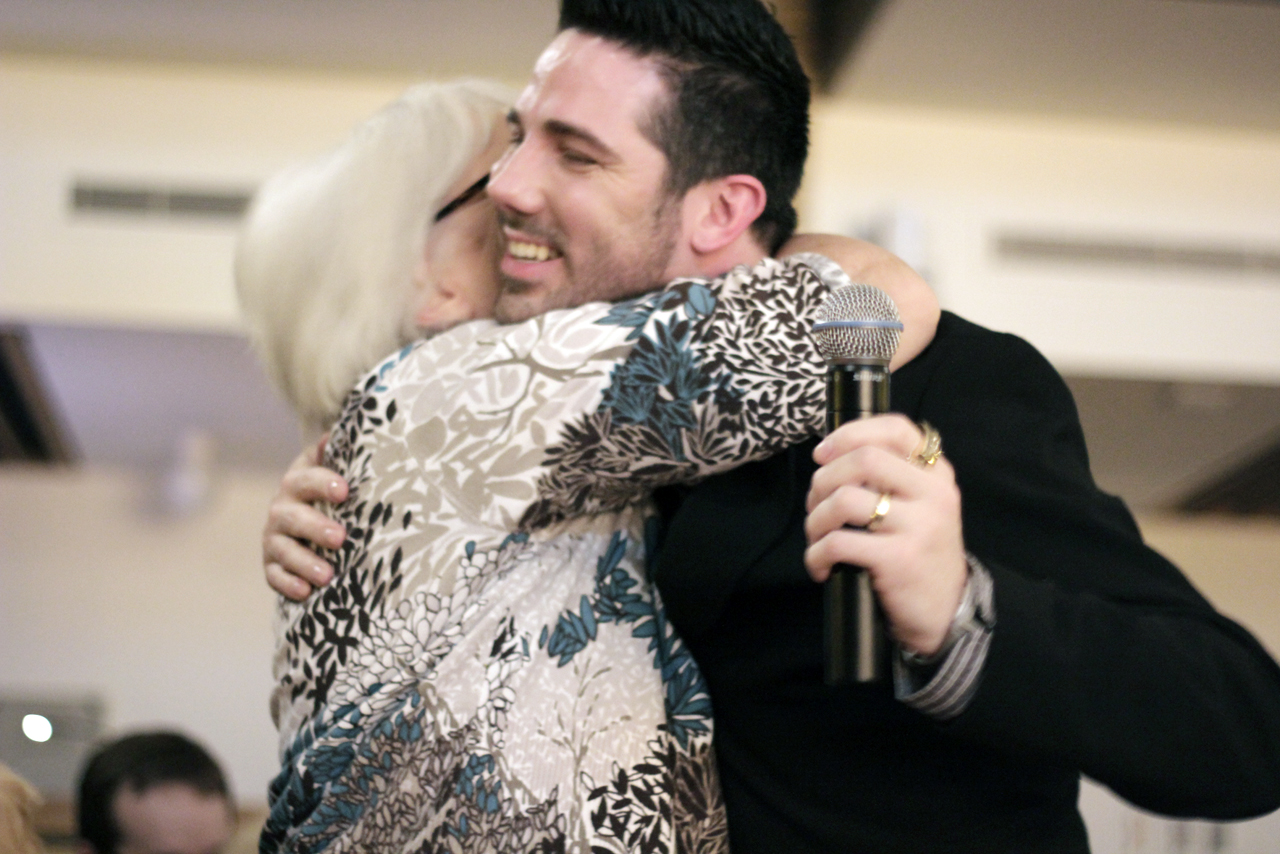 She shrieked and sprang out of her seat when they called her name. The audience laughed, while host – and former “Project Runway” contestant – Christopher Straub left the podium, jogged off the runway, and enveloped her in a hug.
Her winnings? Two free sandwiches from Arby’s and $5 to Five Guys. A “snack pack,” the PR Club called it.

But to Barnstuble, a 63-year-old Fargo resident, it was more than that.
When she was 13, she won a radio contest for four tickets to see the Beatles. All she had to do was write them a love letter.

“Of course, my parents wouldn’t hear of me taking the train to New Orleans,” she said. At the time her family lived in Tennessee. “I was devastated. Winning tonight was sort of like reclaiming a victory that I lost all those years ago.”

She hadn’t won anything in a drawing since. Audience members were granted one ticket into the door prize drawing for each food, clothing or toiletry item they brought to the show. The PR club selected the Young Women’s Christian Association emergency shelter to receive the donations.

Barnstuble filled out her ticket after donating one can of pumpkin filling.

She and her friend Kari Thesing decided to attend the show when Barnstuble read in the  Forum of Fargo-Moorhead that Christopher Straub would be hosting. For their friend circle, every Thursday is “Project Runway” night. Except this season, which is an “All-Star” season, and it’s just not as much fun without Tim Gunn as their mentor, according to Barnstuble. She has adored Gunn, who is also the chief creative officer at fashion giant Liz Clairbourne Inc., since the show began.

“I’m just one hug away from Tim Gunn now,” she said. “I’m sure Christopher hugged Tim when he got eliminated. And now I have hugged Christopher, so it’s almost the same.”

Her companion  Thesing, a Cobber alumna, pointed out another fun fact: “You’re also one ‘auf wiedersehen’ away from Heidi Klum!” German supermodel Klum serves as a judge on “Project Runway.”

The two women, who met two years ago in community theatre, attend everything related to fashion in the Fargo area they can. Next up after the PR fashion show, which they report was great fun, is a purse show.

“But the thing about the purse show,” Barnstuble said, “is that you don’t win things like you do here.”

Like self-taught designer Straub, Barnstuble has a knack for clothing design. She’s working on a spring line for her two granddaughters, and had she known about the children’s fashion category at the PR show, she said, she might have offered some of her designs.

Children will be big recipients of the donations from the show. Nicole Ellis, community relations coordinator at the YWCA, said that last year was the first year that they served more children than women. Of the nearly 1200 people served in 2011, 76 percent were victims of domestic violence.

“Every year [the show] keeps getting better and better,” Ellis said. “It’s because of the community we are able to do the things we do.”

Senior Caitlin Freier, event planner for the fashion show, said one reason the YWCA was selected by the PR Club is that a majority of the club members are female. Maren Hamilton, a senior and student designer for the show, said that the strong relationship between the PR club and the YWCA makes them a simple choice to receive the donations.

This is the third year of partnership between the two organizations.

Chelsea Heeren, who designed and crafted six unique outfits for the show, agreed.

“Our main focus is the Y,” she said. “We want people to remember it’s for a cause.”

Elliot Gielen, freshman and volunteer model, signed up to help with the show because he thought it would be a fun way to get involved with a new activity on campus. He sported three outfits during the show.

“If this is all I had to do for a good cause,” he said after the show, “I think it’s completely worth my time.”

Straub was impressed with the models. Typically, a host might have to improvise the script if a model doesn’t get changed in time, but that didn’t happen this time.

“I’ve never been part of a show when models haven’t been out of order at least once,” he said without missing a breath between autographing photos for audience members.

Barnstuble didn’t stick around for a photo with Straub. She left – Arby’s certificates in hand – satisfied that she finally broke her losing streak.