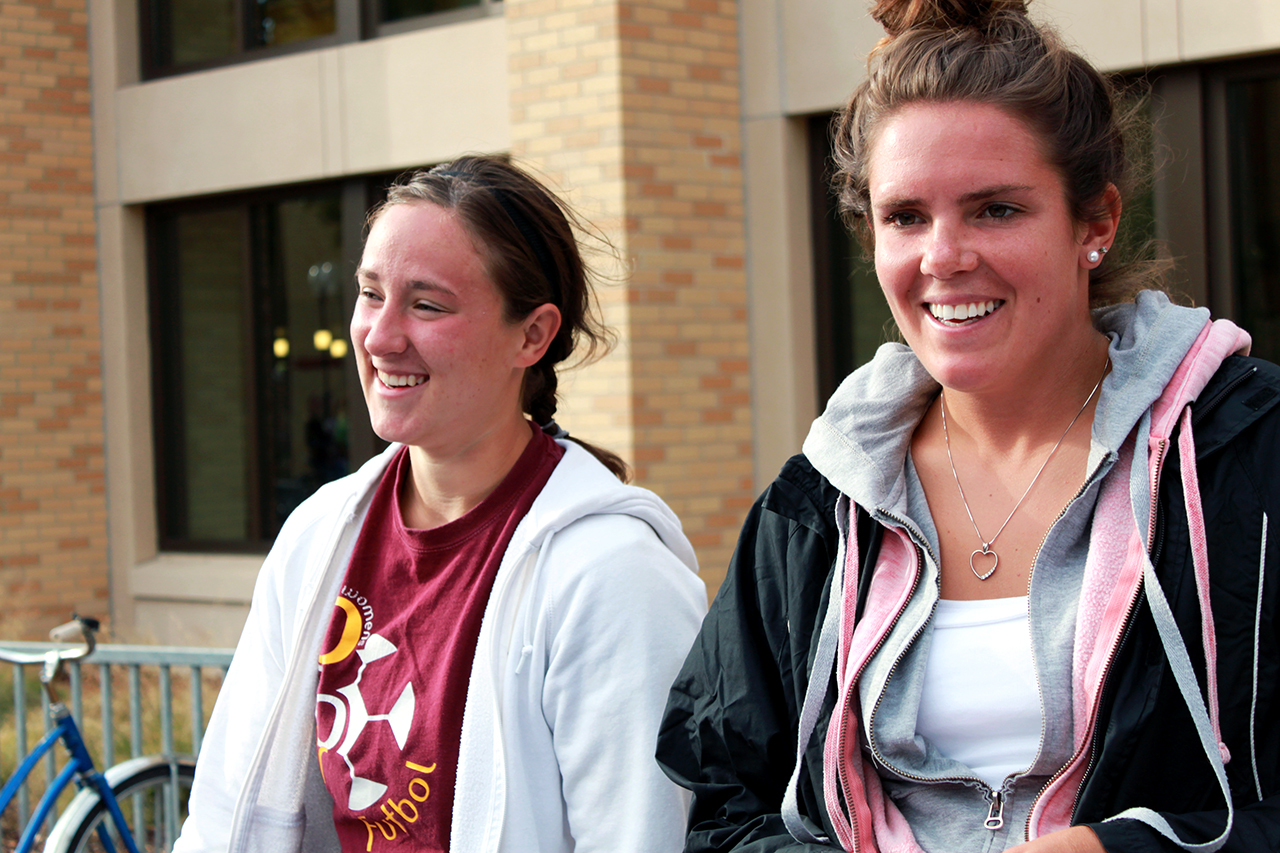 After traveling to Thailand and Cambodia with the women’s soccer team, Haley Haddock was inspired to start a new student organization. Haddock, along with Bekah Marcis, who graduated in May, founded Hope is Possible: The Fight to End Sex Trafficking.

The Cambodia/Thailand trip was the third international trip taken by the Concordia women’s soccer team, according to head coach and advisor Dan Weiler. Each trip, he said, incorporates three aspects: competition, touring, and service. The service portion of this trip had the team working with the Sport and Leadership Training (SALT) Academy in Cambodia.

The SALT Academy serves to educate girls and teach them life skills—giving them valuable independence. Through the SALT Academy they were connected with the Mighty Girls, who make up the Cambodian National Women’s Soccer Team. Mighty Girls is comprised of 12 to 18 year old girls, some of whom were victims rescued from sex trafficking.

On the first night at the SALT Academy, the soccer team went out to dinner with the Mighty Girls. The restaurant dinner involved cooking their own food, which the girls from Concordia were unfamiliar with. The Mighty Girls immediately took over and made sure the girls were taken care of and fed first.

“[The] girls were just so caring for us right away,” said Jessica Scherr, current vice president of Hope is Possible.

“[We] wanted to do something,” expressed Haddock, the group’s current president.

Thus the inspiration for Hope is Possible arose. The creation of the new organization took all of the fall of 2011 to complete. Weiler became their advisor and was very involved in the process, helping them to set goals and figure out whom to talk with. They wanted the organization to be something that runs on student energy.

The primary goals that the organization set are to raise awareness on campus and in the community about the issue of sex trafficking and to raise money for the SALT Academy.

“Fantastic,” is how Weiler responded when asked about his impressions on the accomplishments of Hope is Possible so far. He explained that they exceeded all of the goals they set last year, which he felt were ambitious.

Last year, the group raised nearly $2000 at a benefit concert in the spring and had a speaker from the Twin Cities organization Breaking Free present an informative speech titled: Sex Trafficking 101.

Haddock and Scherr have many more plans for this year. They would like to recognize the Mighty Girls at one of their soccer games, host a speaker from Breaking Free again and hold another benefit concert in the spring. They would also like to hold a book read to get people talking about sex trafficking and to become aware that it happens everywhere, even in Minnesota.

Building this awareness is one of their primary concerns. Scherr expressed a strong desire to inform people that there are terrible things happening in the world that they might not know about. She feels that an understanding of this is essential to helping the situation.

Haddock, Scherr and Weiler all look forward to having new members join Hope is Possible. There was a lot of interest expressed at the Cobber Expo, with the group collecting around 50 email addresses.

Scherr hopes new members will help overcome the taboo on the subject. She recognizes that sex trafficking is a hard subject to be excited about and stresses people’s interest in both learning more and getting involved as more important. Haddock looks forward to the ideas that will likely come from new members.

Weiler underscored the group’s goal to reach beyond the soccer team, and the group’s success at the expo looks like they are well on their way to achieve it. But in order to insure that they really reach out and inspire their new members, the group is focusing on ways to help people relate to how they felt while in Cambodia and Thailand.

They plan to do this by holding Skype interviews with the girls that they met. While they have mailed letters and used Facebook to connect with the Mighty Girls in the past, they feel the Skype interviews will help new members get to know them and better understand where the girls on the soccer team are coming from.

Scherr has great hopes for the organization, and wants to see Hope is Possible grow into something that can change lives, and be a “way to improve the world.”

For more information about Hope is Possible contact Haley Haddock at hhaddock@cord.edu or Jessica Scherr at jscherr@cord.edu.