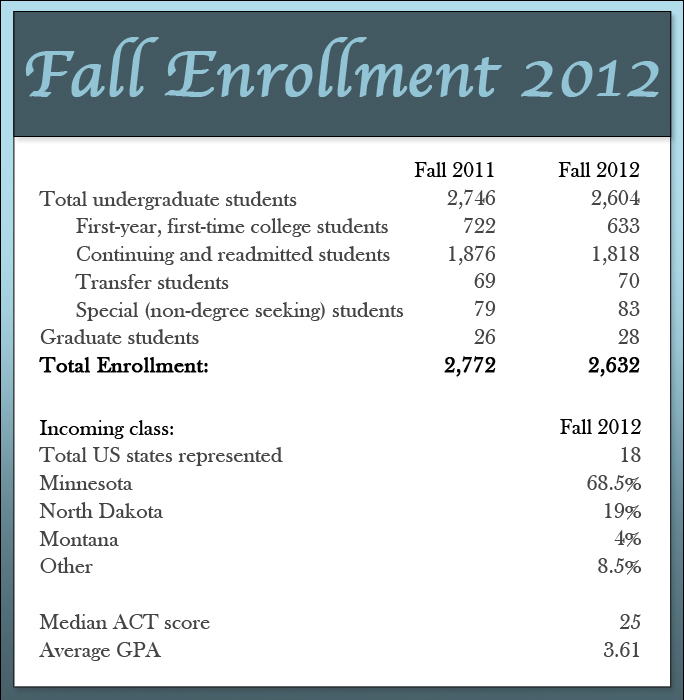 Enrollment is down at Concordia College. This fall, overall enrollment experienced a five percent decrease, but according to the enrollment division, there is little concern for what that means for the school year.

Schuetz explained that this year’s total enrollment of 2,632 students is lower than last year’s 2,772 students, but also that the numbers change every year. He attributes this to two main factors.

First is the number of high school graduates in Minnesota, Wisconsin, North Dakota and Montana. This year those numbers decreased, which could explain some of the decline in the number of students on campus.

Second is the fluctuating economy. As the economy shifts, prospective students’ approaches to their college search change, and in the end it changes the amount of students that enter college in the fall.

Another change this year is the increase in the female to male ratio of the first-year class. Whereas in the past the ratio has been 64-36, the first year class has it at 60-40. However, this does not change the overall campus’s ratio, which remains at 62-38.

The increase in percentage of males can be traced to the increasing number of males graduating from high school and pursuing higher education, Schuetz said.

In terms of the number of students in the classroom, it appears there will not be a noticeable effect.

Ericka Peterson, interim registrar, said the largest number of students in one class this fall is 65 in a Biology 121 lecture, with the average class being 19.86. These are about the same as last year, Peterson said.

The largest difference in classes this semester was the number of inquiry seminars. There are 34 total this year, including seven Credo classes, which is a decrease from last year.

Students will be directly impacted by this decrease in the amount of money their student organizations receive from their proposed budgets. The money that student organizations can apply for comes from the $210 Student Activity Fee included in each student’s tuition. Less students enrolled means fewer dollars going towards the organizations.

“[The organizations] will still have a successful year. [They] can still do a lot…that doesn’t necessarily require money,” she said. “It might require some creativity and flexibility, though.”

Looking to the future, Shuetz said it is possible that the opening of the Offutt School of Business will draw different types of prospective students who are more serious about business.

“It will certainly create a heightened sense of awareness of Concordia,” he said. However, he also also said it is hard to predict the effect that a building will have on enrollment.