By: Alicia Rux
In: Campus, Featured, News
With: 0 Comments 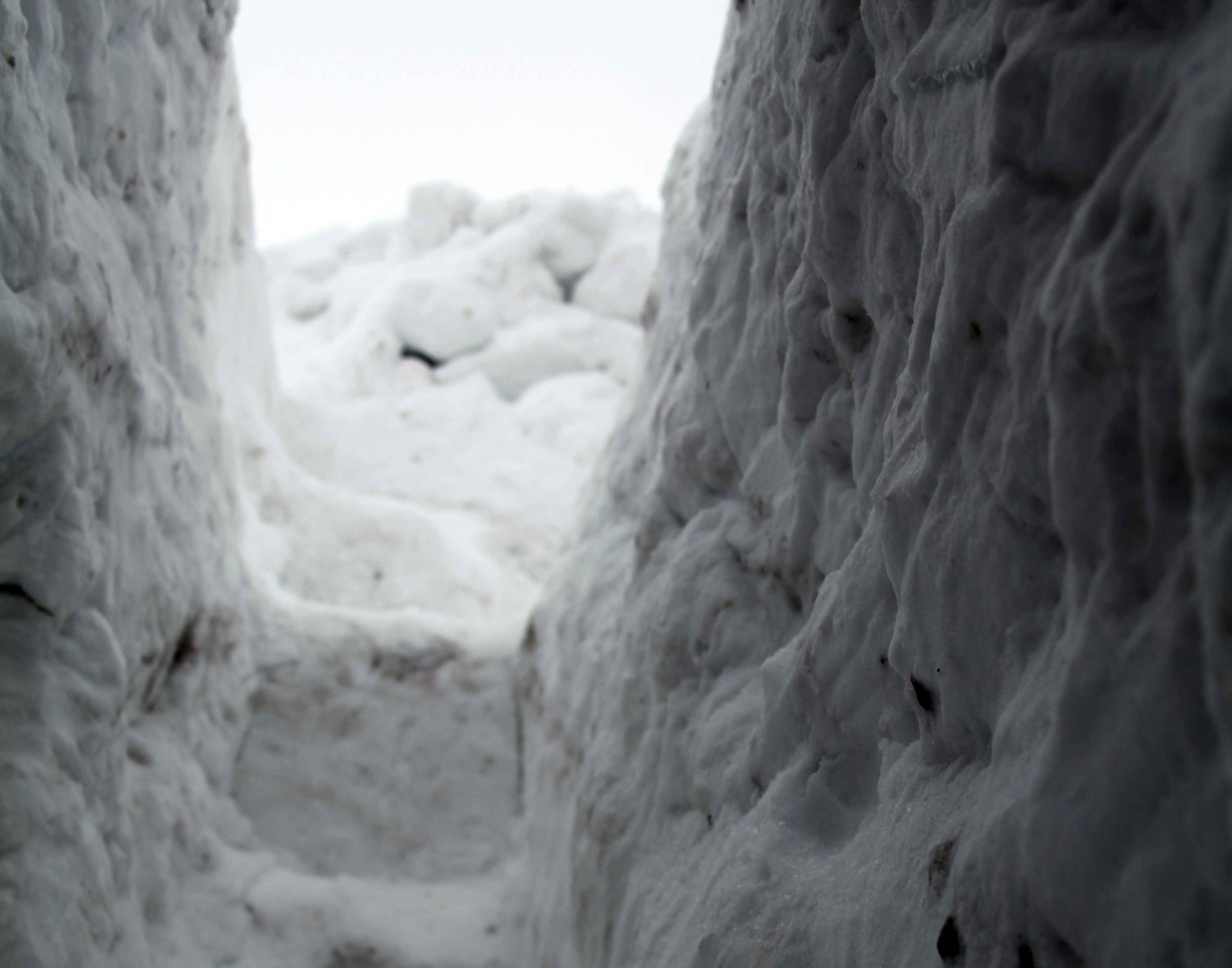 It’s a partly cloudy Thursday afternoon and another unbearably chilly day for Moorhead residents as the temperature drops to a steady 10 below. The several inches of snow that have fallen relentlessly since winter began makes stepping outside rather unpleasant to most people, especially for those who must wander around campus from building to building on the sidewalks that seem unable to remain plowed. This is not the case for Eliza Hartmann or Charlie Stattelman, both freshmen, who apparently enjoy the season of snow and below freezing temperatures enough to spend every spare second away from homework outside with their shovels.

The pair is part of a group of students who have been working on a fort constructed from immense blocks of snow and ice located directly outside of Erickson. The size of the fort has been growing since the Monday, Jan. 3, when everyone returned from Christmas break. Towering more than 12 feet tall in some areas, the snow castle contains numerous rooms, a few sets of staircases—some of them spiral—and several “secret tunnels,” with each section specifically titled and easy to locate on the detailed map Hartmann meticulously alters accordingly with each addition of the work in progress.

“It started out as a fort, but now it’s more of a fortress,” Hartmann said, who resides in Livedalen, making the walk to the fort through campus and across the Eighth Street intersection a rather lengthy one.

The plan was initially set into motion when the students’ inquiry seminar professor, Scott Olsen, mentioned one day during class that it would be nice to see a group of students make some use out of all the snow accruing outside like many had done years before.

“There used to be ice sculpture contests every year,” Olsen said. “This was back even before the bell tower. They were huge and wonderful. There were a couple years where we didn’t get enough snow, and I think that tradition faded.”

Making use out of all the snow is exactly what the students decided to do.

“There were about 20 of us at first, but now there’s only five who actually still make it a point to come out here and work on it a lot,” Hartmann said.

The original group came from Concordia’s freshman orientation Club 25, all of whom shared Olsen as a professor during first semester.

The now much smaller clan, named their fortress’s first slide “Cecke Slide,” a combination of the five students’ first names. Cecke slide is located right next to the “Slide of Death” on the fort’s map with the fort’s different sections correspondingly labeled in various colored pencils matched to the map’s key. According to Hartmann and Stattelman, Cecke Slide is where the snow palace first began.

“It’s hard work,” Stattelman said as he takes a break from cracking away at unnecessary frozen chunks of snow. “I feel stronger since I started working on this.”

The obvious question is how one can possibly withstand Minnesota’s brutal winter temperatures for more than 10 minutes, let alone hours on end.

“Yeah, I’m cold right now, but I don’t really notice it while I’m working. The other day we were standing out here in snow pants and tee shirts. We were so hot and couldn’t stop sweating,” Hartmann said as she adds another block of snow to the latest addition meant as a lookout over the East side of the parking lot. Her face is nearly concealed with her protective scarf and hat.

“If it’s over 10 degrees, we start to sweat,” Stattelman said.

It almost comes as a shock that the snow palace has remained untouched as long as it has. With students constantly coming and going from the dormitory’s parking lot, it has become clear that most have a sense of appreciation for the students’ hard work.

Troy Schmidt, hall director of Erickson, said he believes it is word of mouth as to why the fort remains standing.

“People are hearing about it through different people, and it’s becoming well-known around campus,” Schmidt said. “People know who’s building it, and I think they are respectful of the time it takes to do it.”

“I saw some [little] kids playing on it one time,” Hartmann said.

“We heard through the grapevine that some of the hall directors were sledding on it the other day,” Stattelman adds.

The construction takes a pause when another student shyly approaches the fort from a distance, asking if someone could please locate her red Ford Escape from one of their lookout towers. She forgot where she parked.

It’s no wonder people take notice of the giant abode of snow. From one end to the other, the length of the fortress extends a whopping nine parking spaces.

Hartmann recalls a few days prior when one of Concordia’s maintenance workers had been driving past but was forced to make a pit stop at the students’ creation.

“He asked us if we had any tunnels down here or anything like that,” she said.

“Probably because they don’t want anything dangerous going on where we could get caved in,” Stattelman remarks.

“We said no,” Hartmann adds with a giggle.

The pair say they plan on building an additional wall in front of the wall that already surrounds the fort, which will make yet another area to function as whatever they’d like. The spiral staircase currently located outside of the fort would be considered “indoor” if the plan proceeds, which presently leads to a small, circular-shaped platform with above-the-waist high walls, giving a castle-like appearance with its meticulously stacked ice blocks configuring its height.

“The snow at the bottom really sucks because it’s solid ice, and you can basically chip away an inch at a time,” Stattelman said as he continues to gradually remove the heap of ice surrounding one of the fortress’s quarters.

The two agree that they have worked on the fort at least 15 times each.

“Five-hundred hours,” Stattleman said immediately when attempting to estimate how many total hours have been given to the fort.

“A lot,” agrees Hartmann. She explains that the five devoted builders have “put in 40 hours each for sure,” and the rest of the students part of Club 25 have helped a tremendous amount as well.

Although witnessing the real thing is impressive, it isn’t necessary. Hartmann has posted a two minute and 59 second video clip of the fortress on her Facebook page, getting up close and beyond every crack and crevice.

The two say they are nowhere near being done.

Olsen remembers what he said to his students while they were in his “Adventure, Explanation, and Risk” class back in first semester.

“Do something beautiful—make an ice hotel,” Olsen said. “They’re used to having ideas of large scale.”