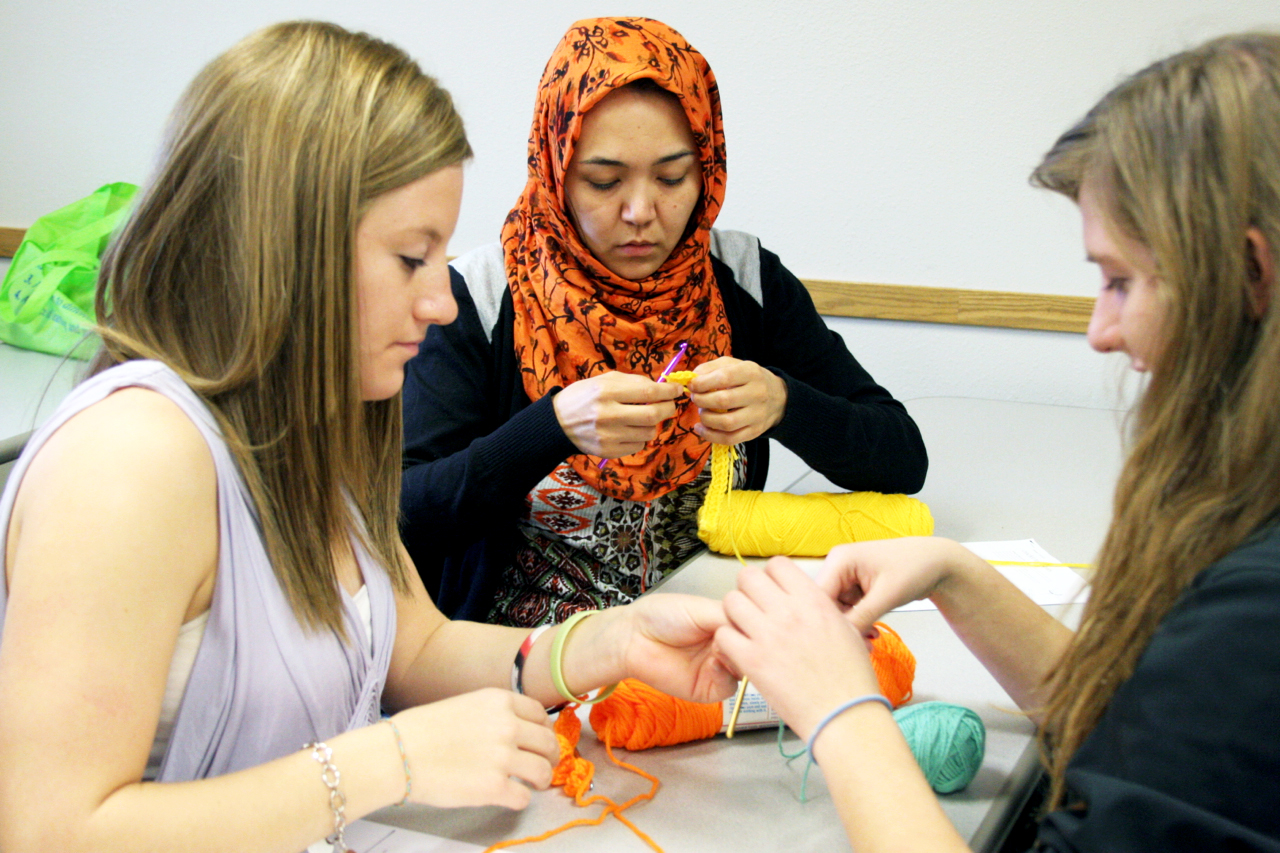 In a room filled with colorful balls of string and bright needles, students try to cast on or figure out where they may have dropped a stitch or two. During Amy Watkin’s inquiry class, “Beyond Genocide: Learning to Help and Hope,” these students were able to take a break from their normally heavy discussion topic to understand the art of knitting and crocheting.

Each student in the class is required to make at least one small square by knitting or crocheting that will eventually be combined with all the other squares to make a blanket. It will be sent to the SOS Children’s Village, an orphanage in Kigali, Rwanda.

The children who live there are the children of mothers and teachers whose lives were affected by the Rwandan genocide in 1994. Concordia has special ties with this village due to the annual May seminar, “Rwanda: Service in the Heart of Africa.” Part of each returning trip, which Watkin leads along with professor Bill Snyder, includes time spent at SOS.

“This project helps us to maintain that relationship with them and to help out some more,” Watkin said.

Watkin brought her mother in to offer a special knitting tutorial to the students. She is the best knitter she knows, Watkin said. Jessica Nanik from the campus organization Itch to Stitch also came to class to teach knitting basics. Between these three knowledgeable teachers and a few students who already knew how to work a needle or hook, the class slowly started to create a project they would work on for the rest of the semester.

“It was really important to me that [the students] had an opportunity to move beyond genocide and actually, literally, learn to help and hope,” Watkin said.

Although the class is making one blanket using all of their squares, Watkin has encouraged all of the students to consider making more squares or even a whole blanket that they could send to Rwanda.

Abby Kratzke is one student in Watkin’s class who is excited for the chance to crochet and to get a break from the normal class schedule. “There are so many different stories [about genocide] and it’s so interesting but sometimes you don’t want to hear it,” Kratzke said.

She is an experienced crocheter and helps out fellow classmate Zahra Tahir with her square. Tahir says she knew how to crochet before but has since forgotten.

One table over, Spencer Nelson is laughing as his fingers get tangled in the string. He is still trying to cast on, but is very determined to figure it out. “I’m a first timer,” he says. “It’s an incredible experience, though, and I’m trying to pass on the family tradition and live up to the Nelson tradition.”

Nelson has been affected greatly by this class and says he now understands how sheltered he was. “We are opening our eyes to things we’ve never seen before. I came in here thinking genocide was a one time thing, but it’s a huge issue.”

Watkin hopes the class teaches the importance of service in addition to such an overwhelming topic.

“All service is important for that reason. So we don’t get stymied by the abundance of knowledge,” Watkin said.

Once the blanket is finished, the class will write a letter to the receiver and send it to SOS at the end of the semester.