By: Jessica Ballou
In: Community, News
With: 0 Comments 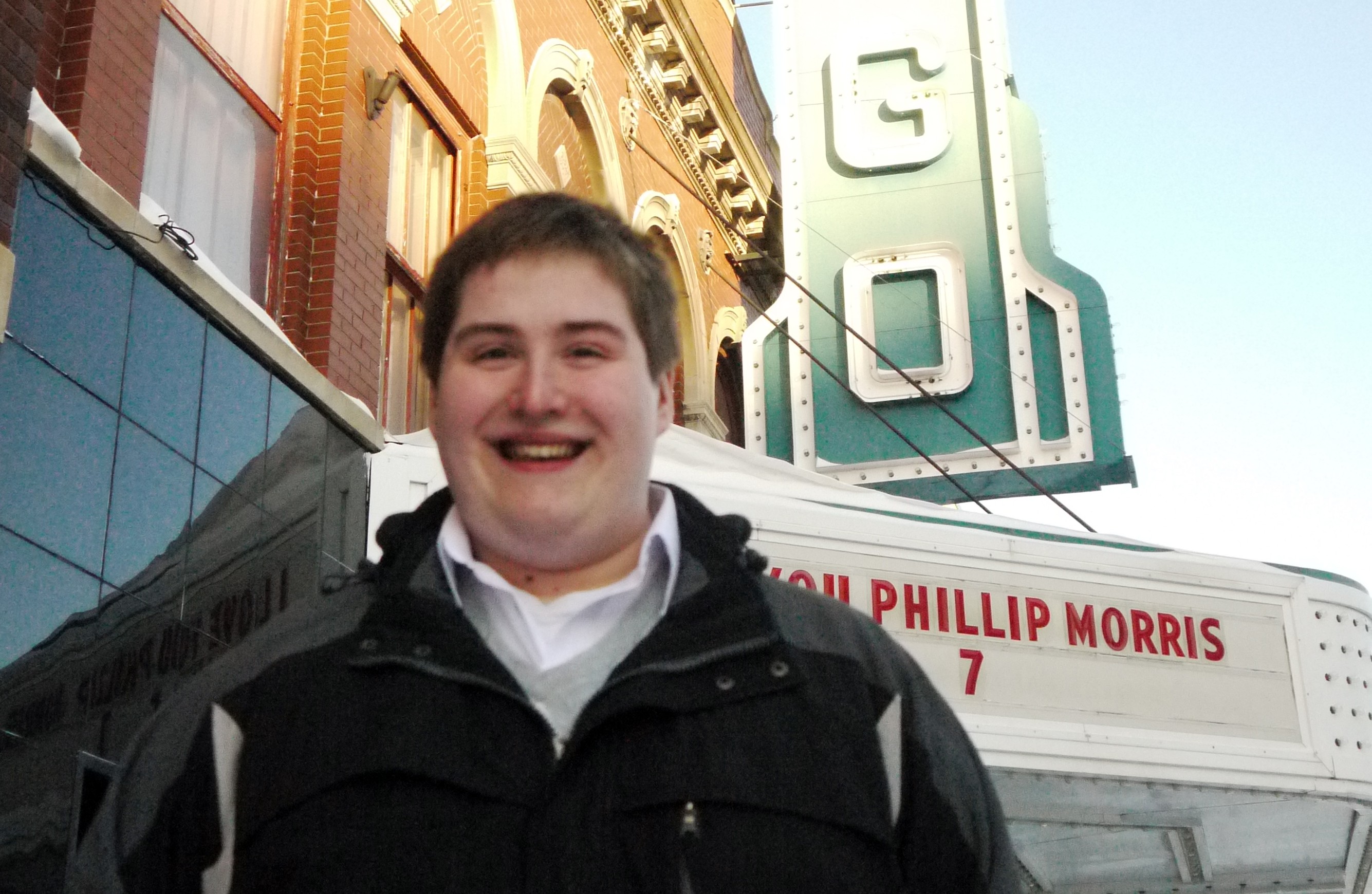 As of June 2011, 2010 graduate Sean Volk will become second-in-command at the Fargo Theater, as the operations and administrative manager.

Volk has worked at the Fargo Theater since he was a junior at Concordia because he was interested in getting a job off-campus and he’s loved movies as long as he can remember. The Fargo Theater seemed like a natural fit, according to Volk.

After graduating from Concordia last spring, Volk took on a new daytime administrative position at the theater. He started working with Executive Director Margie Bailly and Film Programmer/Film Events Coordinator Emily Beck, and the three of them became quite close. Over the last year Volk said he’s gotten to know Bailly better.

“She’s been such an encouraging and positive person,” he said. “Even though I’m very young, she doesn’t hold that against me. She treats it as an opportunity. I really love working with her.”

A few weeks ago, Bailly did the six-month performance reviews for Volk and Beck. About two weeks after the reviews, Bailly revealed to the Fargo-Moorhead community that she would be stepping down at the end of the year, which they already knew about from working closely with her.

“Instead of doing a search and hiring from the outside, she looked at Emily and I and saw the talents and strengths we had,” Volk said. “It’s sad that Margie’s leaving, obviously, because she’s been such an influential figure in my career, but I’m so excited to see what we can do.”

“I’m excited to continue the work that we’ve all been doing together, but also to reframe some of that in a way that will attract newer, younger audiences,” he said. “There are so many people in the community who don’t think of coming to us on a normal basis, so we’d like to increase our visibility because the theater’s been there for 85 years in March. I just feel honored that I get to participate in part of the history of this place. It’s older than my grandparents. It’s just this beautiful, iconic, magical place.”

Bailly has worked at the Fargo Theater for 15 years, and she said she wanted to leave when the theater was in good hands.

“They’ll be fabulous, otherwise I wouldn’t have picked them,” she said. “It’s great to see a young staff take new visions and ideas. They’re a team I would not want to break up. They have different skills, but they mesh well together.”

“He’s irrepressible,” she said. “Behind that smile, there’s a brain that’s always working.”
Emily Beck has known Volk since he was five, when they both grew up together in Valley City, N.D. Beck graduated from Minnesota State University-Moorhead, and has been working at the theater for two and a half years.

“[Volk]’s just a constant professional and just kind of an extraordinary example of a people person,” she said. “It’s been really fun reconnecting with each other as young adults in the professional world. He makes the atmosphere here so upbeat and positive, which makes coming to work each day exciting and something fun.”

Beck said she looks forward to this new promotion for both herself as executive director and Volk as operations and administrative manager.

“I wouldn’t want anyone else taking that position,” she said. “He’ll be a great fit. With me transitioning up, it makes me much more comfortable knowing he’ll be there. We’ll be a great team.”

Junior Stephen Edwards has known Volk for just over a year since Edwards started working at the Fargo Theater.

“He’s always upbeat, always has a smile on his face,” Edwards said. “He has a lot of energy, and he’s a really good guy.”

Edwards said he thinks the promotion is great and not undeserving for Volk.

“He works really hard and he does a lot of great things for the theater,” he said. “He’s a really great person to work with, as a concessionist and a manager. Both have been good experiences.”

Volk said around this time last year, he envisioned himself in graduate school. Once he looked through different academic and professional options, he informed the theater he was interesting in staying around. He said he has enjoyed his time spent working at the Fargo Theater so far.

“We have such an unconventional work environment,” he said. “We’re all really good friends and we have weird, quirky senses of humor. Emily has a formal degree in film history, and for us to be able to trade quips and make obnoxiously obscure puns have been a blast. It’s good working with people who loves movies as much as I do.”

Susan O’Shaughnessy, professor of philosophy, first met Volk when he took her “Coffeehouse Culture” inquiry seminar as a freshman. O’Shaughnessy kept in contact with Volk through other classes of hers and work on Volk’s student lecture, of which she was the faculty sponsor. Volk asked O’Shaughnessy to be his escort for the Homecoming court last fall, and she said it was a wonderful day.

“He’s effervescent,” she said. “I think he’s a very creative person, but he adds hard work and dedication and discipline, which has made him very successful. I’m sure it’s one of the reasons he’s done so well there.”

O’Shaughnessy said she is very happy for Volk and his new promotion.

“It’s great that the Fargo Theater is getting a lot of young leadership,” she said. “Having a philosophy major makes sense for someone who has that kind of promotion at the theater. Philosophers have the ability to think through complex problems for solutions, and his preparation in art and film will really help him as well.”

2010 graduate Kent Kolstad has been one of Volk’s roommates since their freshmen year in 2006.

“He’s incredibly articulate and dedicated to everything he involves himself with,” Kolstad said. “There’s nothing half-baked about Sean. Everything’s taken care of to its fullest degree.”

Kolstad and Volk went on a communication studies and theater art May seminar across Europe in 2008, and Kolstad said it was an experience that enhanced their relationship.

“It was a really great time to expand that friendship,” he said. “As roommates, there aren’t a lot of other ways to do that. Some roommates are besties or friends first, so we had time to expand on that.”

Based on Volk’s art of articulation and dedication, Kolstad said this new promotion will be fantastic.

“I’m really excited for him in a big way,” he said. “It will expand horizons for him and for the Fargo Theater, which is a wonderful venue in the area. I think the variety will be expanded, and it needs it. There’s always a new demographic to reach, and I think they’re in a great place to do that now.”

Volk said he grew up watching zombie movies, and now he prefers the subgenre of zombie apocalypse, a genre which the Fargo Theater showcases occasionally.

“There’s just something so morbid and scary when you think about how would I react in that situation?” he said. “Would I be able to live in a basement or shoot guns? The answer to both for me is no.”

Volk said he can usually find one thing to enjoy in every movie due to his love for cinema, except when it comes to one genre.

“I’m weirded out by poorly computer-generated talking dog and cat movies,” he said. “Like Marmaduke that came out last summer? That’s creepy. That’s not right. Those Cats & Dogs movies? Uh uh. I don’t like talking animal fiction except for Scooby Doo. That’s different.”

The Fargo Theater was built in 1926, and it has since been restored as “the premiere destination for cutting edge independent and foreign film,” according to the theater’s Web site. The theater also hosts special events such as silent movie nights, midnight movies, a variety of concerts and comedians, as well as a few blockbuster movies on a regular basis.